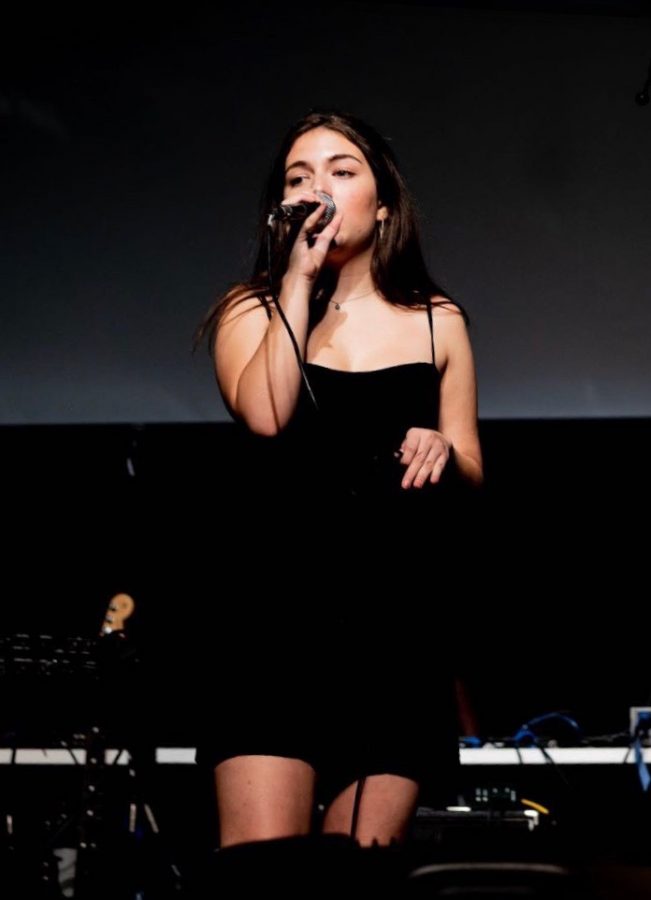 With the release of her first Extended Playlist (EP) on Sept 19, senior Ellen Cordisco is charging headfirst into the world of professional music. Her four-song self-titled EP “Ellen Cordisco” contains a range of songs, from upbeat to somber, and is available on all music streaming platforms.

Cordisco first stepped into the world of music at the age of five when she began singing and writing songs from the comfort of her bedroom. However, she only became serious about it during her freshman year when she joined Redwood’s music department.

“[In Intermediate Performance Workshop (IPW)], we were writing, playing and learning about music, and I had just never been in a serious music environment before. I fell in love with it and, from that point on, I wanted to really strengthen every part of my knowledge on music,” Cordisco said.

Through IPW and Advanced Performance Workshop (APW), senior Aiden Thompson, a bandmate and classmate of Cordisco, has been able to watch her advance as both a singer and person since their days in elementary school together.

“I’ve seen her grow a lot as a performer and get a lot of confidence on stage, which I think is honestly half the battle when you’re performing,” Thompson said.

“I think she is more driven than a lot of other students, so she actually works to improve instead of just doing her best,” Lodish said.

This passion ultimately led Cordisco to release her own music. Last year, Cordisco released an original song on the online audio distribution platform SoundCloud. Her song, “Waste My Time” featured a jazzy combination of piano, drums and vocals. Despite the positive feedback she received after its release, Cordisco still wanted to step it up for her next EP: she felt like it was time to write more songs and extend her music to all streaming platforms, rather than just SoundCloud. To further improve, Cordisco also explored other music programs outside of APW.

Known for its world renowned performing arts training, Cordisco attended one of New York University’s (NYU) summer music production programs in 2019 to expand her expertise. Though the program did not focus on singing and vocals, Cordisco was able to receive high level training from prestigious professionals about the intricacies of music production.

“It really encompassed everything I wanted to do. We wrote the music, we played it, we recorded it, we mixed it and then at the end we got to perform it,” Cordisco said.

While NYU’s program helped Cordisco become more familiar with the production of EPs and all of the behind-the-scenes work that goes into creating them, she still ran into difficulties when producing her music at home.

“The hardest part for me was engineering the music because, even though I went to that program at NYU, I don’t have super strong experience mixing music. It took me a while to get into the groove of how I wanted to layer all the instruments and how loud each one should be,” Cordisco said.

Although Lodish and Thompson agreed to record the guitar instrumentals for Cordisco’s EP, they immediately ran into obstacles due to COVID-19 restrictions. Unlike the typical album recording process, the two were unable to go to a studio to play and record together.

“Usually we’d sit down at Redwood because they have a really nice recording facility and we’d sit down for a couple hours and record. It was definitely different doing it at home.” Thompson said.

Cordisco’s vocal coach, Amber Morris, also played a vital role in the EP process by working on emotion and range in Cordisco’s songs. Morris has been working with Cordisco for four years and has been able to help her grow as a singer and performer. During Cordisco’s vocal training, Morris also helps her prepare for events such as college auditions, showcases and music class. The release of Cordisco’s EP has made Morris extremely proud, as she believes it has increased her confidence significantly.

“I think that getting this four-song EP out has been a tremendous power move for her because everything she had to do to make it happen was on her,” Morris said.

Since the release of her latest EP, Cordisco has been more inspired to pursue her music career and continue her musical journey in college.

“I would definitely love to [continue producing music]. I don’t know if in this next year that’ll happen, but when I get into college, I want to study music production and songwriting,” Cordisco said. “I want to really strengthen my skills in those areas so that when I do release a [full] album, it’s really professional.”