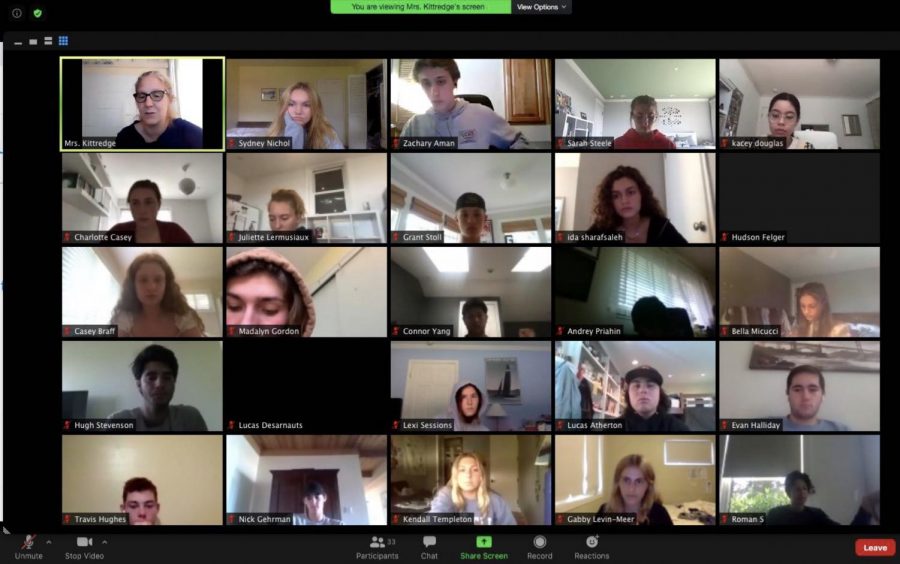 On the morning of Aug. 19, junior Sydney Nichol anxiously awaited her first day ever at Redwood. Although she had been the new kid before, this time was different: she was not able to be greeted by welcoming administrators, who would typically show her around campus with a smile to make her feel a little less frightened. She was not able to get to know her new classmates and teachers in person. Instead, Nichol’s first day consisted of logging into Zoom calls and blending in with the other tiny squares on her screen. Being a new student at a completely different school is already difficult enough, but due to the COVID-19 pandemic, Nichol is faced with the additional challenge of attempting to make connections without in-person interaction.

Nichol and her family have lived in Marin County before; when Nichol was in elementary school, they moved to Kentfield for a brief period of time before eventually moving back to New York City, where she is originally from.However, this year, COVID-19 shutdowns prompted a spur of the moment decision to move back to the Bay Area to be closer to their other family members. Despite their familiarity with Marin, Nichol still considers this adjustment to be the most abnormal one she has experienced.

“[Moving schools has] been really weird, mainly because it’s online. I think that it’d be a pretty classic move if we weren’t in a pandemic where I could just go to class and meet people,” Nichol said. “All the teachers are great, and the people I’ve met have been kind, but I definitely haven’t been able to meet many people.”

Having experienced difficulties when attempting to make authentic connections online, Nichol has instead turned to another method: sports. Soccer has always been Nichol’s favorite sport, but now it provides her with both a reason to get out of the house and an outlet to form new relationships.

“I’m on the [Marin FC] club soccer team, so that’s definitely been a big help in meeting people.I’ve also met a few people [from the team at] Redwood who I have some classes with, so that’s really nice,” Nichol said.

Fellow junior Devon Soofer understands what it is like to transfer into the Redwood atmosphere as well. During her sophomore year, Soofer decided to come to Redwood from Drew, a small private school in San Francisco. Soofer accredits her smooth transition in part to Redwood’s many in-person activities typically at the start of every school year.

“[Through] the Back to School Dance and just rallies in general, you’re able to come together with all the students as one big Redwood community, and that just made me really feel special,” Soofer said. “And then also your relationships with your teachers: you really are able to create bonds firsthand, whereas [with] remote learning, you’re not really able to do that, so I think that’s definitely an obstacle.”

Also transitioning to Redwood during this online environment is fellow junior, Thayer Schwartz. Living in the Bay Area had always been an aspiration of the Schwartz family due to the fact that Thayer’s father grew up in Oakland and they frequently visit their home in Lake Tahoe. Due to the Coronavirus, increased flexibility surrounding working from home finally presented them with an opportunity to move to a middleground, Marin. Schwartz, who is familiar with being the new kid as well, believes some aspects of online school may be working in her favor when meeting new people.

“I think it’s better [meeting new people] with the breakout rooms because the only people I’m going to end up getting Snapchats from are the people looking for [new] friends to connect with,” Schwartz said. “Whereas if it was in school, it would probably be a little harder because everyone would just be talking to you because you sit next to each other in class.”

Although Nichol believes that the challenges that accompany transferring schools have been difficult to manage, she has still had some positive moments in and out of school that have made her transition a little easier.

“I obviously would prefer to be able to meet people and start school sports, little things like that. But I think that meeting people through soccer and the teachers being super nice, that’s been really helpful,” Nichol said.