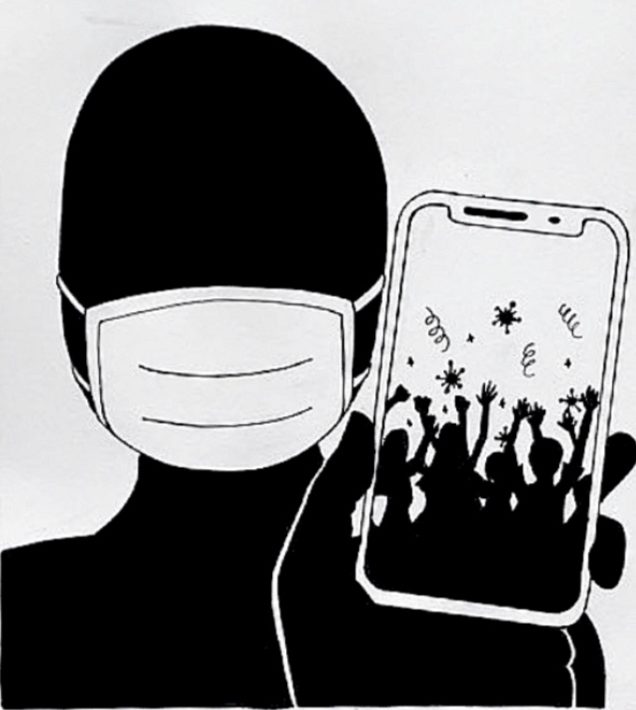 As I was preparing for another semester of high school online a couple months ago, alone in my room, I opened TikTok to see almost 70 top influencers partying in the “Hype House.” With my online school schedule in hand, I sat at my desk and watched tons of young adults and teenagers hold red solo cups and grind on each other knowing full well that, while these influencers partied, my junior year would consist of hours of staring at a screen in isolation.

Despite the regulations surrounding COVID-19, teens and adults alike often seem to have a hard time comprehending how closely they should be following the rules. Even those who are in favor of wearing masks and social distancing are left questioning what precautions they should be taking, and some social media influencers’ blatant disregard for these rules just worsens the confusion.

When California’s shelter-in-place order was issued in March, social media platforms such as TikTok, Instagram and YouTube were swarmed with talk about the virus. But after only two months, social distancing was treated like another trend. And, just like the “Renegade” dance, influencers were soon over it. It was made apparent to social media users, myself included, that the majority of influencers decidedly assumed they were above the rules and that enough time had passed for them to go back to seeing their friends and partying, despite the deadly virus.

One of the most problematic events included Jake Paul’s party on July 14th, where maskless influencers swung from heavy machinery for his music video. Videos from the event posted on social media demonstrated the blatant disregard of social distancing guidelines among content creators. From this party, YouTube personality Tanner Fox contracted the virus and later posted a vlog about it. Because of the contagiousness of the virus, it is likely that many more attendees tested positive as well. After having to endure months of not seeing my friends, I was beyond frustrated to hear about this, and I opened Youtube expecting an apology of some kind from Paul. Instead, to my disappointment, Paul responded to Fox with “I don’t care.”

Less than two months later, my social media was flooded with content about, yet again, another privileged and careless influencer event. TikTok star Bryce Hall’s 21st birthday party had an estimated 100 or more maskless attendees, including many popular influencers. The guests crammed into Hall’s mansion, and several male and female strippers were additionally filmed dancing in the crowd. The party carried on until 4 a.m., until it was shut down by the police.

Though there is no excuse for their actions, seeing influencers like Paul and Hall partying during a pandemic is no surprise considering their problematic histories online. However, seeing idolized and widely appreciated influencers such as Charli D’Amelio, James Charles and Emma Chamberlain attending these kinds of events is not only disappointing, but potentially harmful to many of their fans. As role models to often young and impressionable audiences, they set examples of bad behavior that, if imitated, could potentially result in death. So one can imagine how hard it was for young fans (myself included) to hear that these influencers were each seen at YouTube celebrity Larri Merritt’s birthday party a couple of months ago, which had an estimated 67 attendees that were either wearing masks improperly or not at all. The party consisted of the influencers drinking and dancing at the Hype House as hundreds more waited outside hoping to be let in, according to Thomas Petrou, a Hype House co-founder.

Amidst the destructive behavior many creators have been taking part in, there have been attempts to model responsibility. Some creators even began to recognize the serious weight of their actions, posting like they normally would, but this time in hopes to spread a positive example. After Larri Merritt’s party, several creators, including James Charles and Merritt himself, issued apologies online. In addition, they both posted pictures of their negative COVID-19 tests in hopes that proof they were virus-free would clear the air.

However, this did more harm than good. By publicizing that their actions had no serious consequences, they spread the misconception to followers that being careless about the pandemic has no serious impact when, in reality, there have been over seven million cases of the coronavirus in the United States and 209,394 deaths. Just because these two influencers happened to test negative for COVID-19, it does not mean that they or their fans are immune, and pushing that narrative is dangerous.

After these problematic events, government actions were taken. Los Angeles city mayor cut off the power and water to Hall’s content house because of the boys’ behavior surrounding the pandemic, and Los Angeles city attorney Mike Feuer charged Bryce Hall and his housemate Blake Gray with a misdemeanor. Both boys were charged with $2000 in fines and up to a year in jail. When I heard about this in August, I was convinced that there could be a major change in how Hall and Gray would be using their platforms. I was wrong. It is now October, and the content I am seeing now is almost identical to the content from August, the only difference being a change in scenery.

These people are called influencers for a reason: starting trends and inspiring people is what they do best. After Charli D’amelio posted a 15 second dance video in 2019 called the “Renegade,” over 30 million people learned the dance. When Emma Chamberlain wore Scrunchies, Doc Marten shoes, and fluffy jackets in her videos, thousands of teenage girls started wearing the same things. And, unfortunately, when these same people actively show themselves ignoring social distancing protocols, millions are inclined to follow their lead. Although seeing popular influencers together having fun is the kind of content users like to consume, it is crucial we demand accountability from them in order for them to stop popularizing privileged behavior.