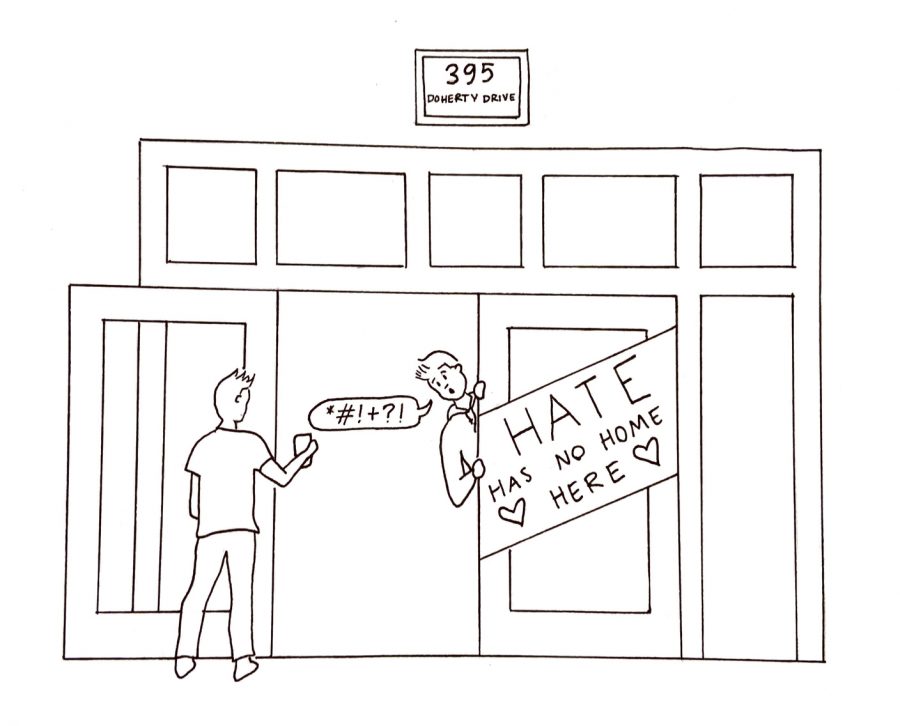 Think back to November 2019. Coronavirus is still a thing of the future. You are walking the crowded halls of Redwood, navigating past the trio of freshman girls unaware that their position blocks everyone else’s path. You rush to the Wellness Center to snag one of those delicious cough drops, and then wait an unnecessary amount of time in line at the water fountain for a kid to fill up his water bottle perfectly to the brim. Your day is as ordinary as any other, and then you hear someone use a slur. Maybe it is someone calling something “gay” with disdain, or a non-black student using the n-word to complete a song lyric or a micro-aggression, so slight it is barely noticeable by anyone except the target. But, the sad part is, at Redwood, hearing it does not make your day any less normal.

At Redwood, 48 percent of students report hearing the use of derogatory language every week or more. Furthermore, Marin County’s demographics reflect an apparent lack of diversity, with 85.3 percent of the population being white, according to the U.S. Census Bureau. The Racial Justice Bureau even reports Marin County as the most racially disparate county in all of California. The homogeneity at Redwood in particular contributes to notions of white supremacy and the idea that students can say whatever they please, despite the administration’s efforts to mitigate these incidents.

I moved to California from New York City in the summer before my freshman year. In my first few days at Redwood, I was horrified by the nonchalant use of slurs. Never before in an academic setting had I heard someone use homophobic, xenophobic or racial slurs, but I heard all of those within my first week. Moving from one generally progressive county to another, I assumed Marin would hold similar ethical standards to New York City. In spite of Marin’s self-proclaimed inclusive culture, it appears as though much of it is merely performative. A different story is told behind the scenes, and within school halls, that results in serious consequences.

As the Black Lives Matter Movement regained traction following the death of George Floyd in May, 2020, vigilante justice was employed at Redwood as several students were “exposed” and “canceled” (socially scorned and isolated) for saying the n-word. Many were frustrated with the administration’s response to the allegations, or seemingly lack thereof. Despite these assumptions, Principal Sondheim asserts that action was taken, just not publicly. When allegations are made towards minors, Redwood legally cannot divulge information in the same way that police can do with those crimes. 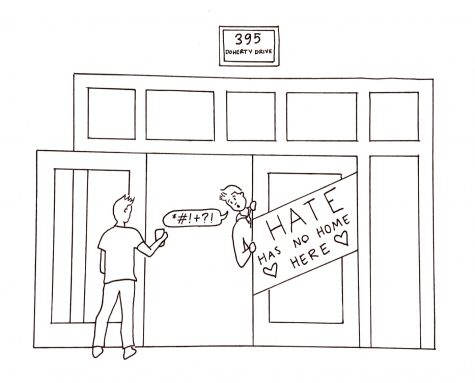 Even so, the administration’s inability to fully communicate the behind-the-scenes of disciplinary actions has resulted in a clear disconnect between students and administrators. Many feel the administration is simply tolerating the use of slurs and other discriminatory behaviors. With the growth of social media, it has become dangerously easy for students to make viral what they personally feel is right, and take it upon themselves to socially isolate students they feel are not being properly punished. And so the students, not the administrators, are playing the role of judge, jury and executioner. While hate speech should not be tolerated, the idea that “canceling” a singular student will solve the problem of slurs here at Redwood is simply incorrect. Instead, these online actions will only further divide the student population.

Although it is incredibly unfair that the victims of micro-aggressions and derogatory language need to take the high road in these situations, it is necessary to inspire positive change. You cannot fight fire with fire, and you cannot fight hate with hate. Reciprocated bullying towards one student may temporarily silence them, but in four years, an entirely new batch of kids will be in high school and Redwood’s toxic cancel culture will continue. Slur usage is never okay, and will never be okay. But if we begin to foster a culture of communication, understanding and learning, we have a chance at permanently minimizing the use of derogatory language here at Redwood and establishing a longtime habit of awareness and growth. The same cannot be said for cancel culture.

Employing cancel culture is almost like playing rock against rock in a game of rock, paper, scissors. No one emerges a winner, and both sides remain frustrated. Additionally, it’s important to recognize that we are still in high school and people make mistakes, granted some mistakes are far more serious than others. But think to yourself—if you made a mistake, what would help you avoid it in the future: the entire student body viciously attacking you, sending death threats and terrorizing your family members, or, if someone reached out to you and calmly explained why you were wrong and why is it so important not to make that mistake in the future? Yes, the first option would likely lead to you refraining from ever showing your face in public again, but it would also probably lead you to a deeper place of hatred. And, as for the latter, well, I know it would educate me.

Everyone at Redwood dictates aspects of our culture in some small way. If you’re one of the people contributing negatively through the use of slurs, consider your impact. I doubt it’s one you want to have. If you’re one of the people taking to social media in an attempt to virtue signal by putting others down, consider your impact. Don’t become that which you are fighting against. We all make mistakes, but we do not always learn from them. Let’s start learning. After all, that’s the whole point of school anyway.