Sports teams fall back into practice 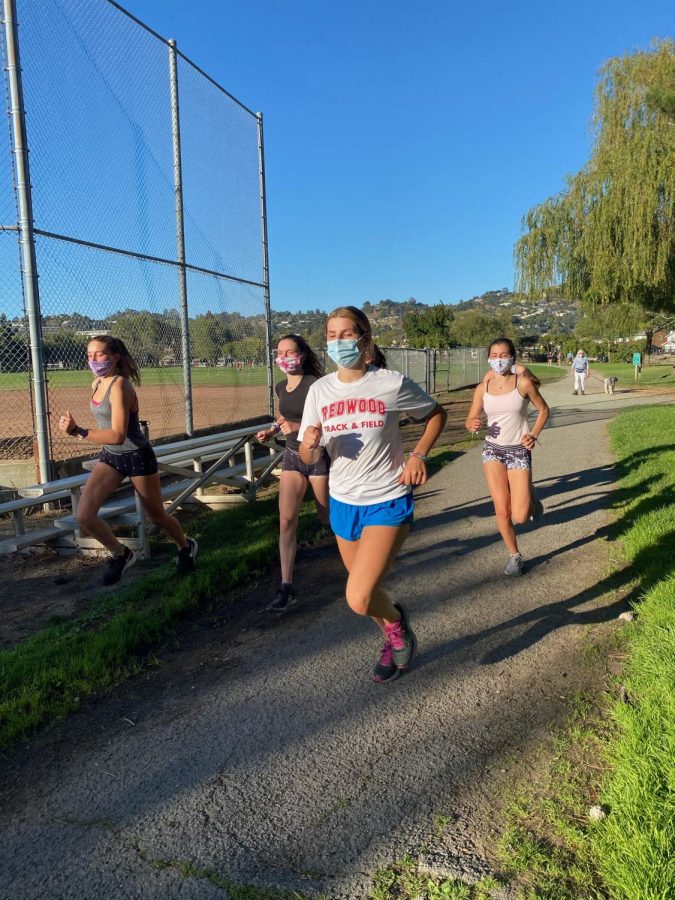 Runners on the cross country team wear their masks while training. (Photo courtesy of Keely Ganong)

As students began to settle into their desks at home for the start of online school, the preseason training for fall sports sprang into action. The following sports have slowly resumed practices to the best of their ability within the current guidelines. The fall sports season has temporarily been pushed back to Dec. 7, though this date is still subject to change.

The National Football League began their 2020 season on Sept. 10 and Redwood followed suit with football training starting soon after. While professional football returned to a full contact season, Redwood football kicked off their return with socially distant conditioning.

Redwood coaches have made adjustments for this season’s practices under the new guidelines, a stark contrast to previous seasons which consisted of practices five days a week with time in the weight room. The practices under COVID-19 guidelines will be an adjustment for many of the players, including junior and varsity player Nico Tribuzio.

“[Practicing during the pandemic] is going to be tough. It is nice that we have two and a half hours, three days a week to get out there, but it is definitely going to be an adjustment,” Tribuzio said.

In addition to reduced practice times, Tribuzio has found the transition to not wearing helmets or pads because of the no-contact restrictions challenging. Because football is centered around contact, practicing without it will impact the team negatively when normal play resumes.

“For the freshmen and new players, it’s just [difficult] because right now we would already be tackling and getting used to hitting each other,” Tribuzio said.

Despite the restrictive guidelines, the team has been able to start conditioning in the form of running and passing drills.

As students began to settle into their desks at home for the start of online school, the girls’ tennis team stepped onto the courts, resuming practices at the end of August. Even though players can social distance by remaining on opposite sides of the net, they still have additional restrictions due to COVID-19 guidelines.

The team has been divided into two pods, and players are limited to interacting with only those in their pod. Currently, the team can only communicate through phone calls, texts and emails, which negatively affects the social aspect of tennis.

Although the team feels divided, senior Gabriela Rosenfeld still sees the positive side of continuing training.

“It’s something to look forward to, and it takes us out of our bedrooms and [off of our] computer screens. I definitely appreciate tennis a lot more every practice that I get since they’re less frequent,” Rosenfeld said. “It’s more special now because it’s one of the only things that I can do with other people.”

Despite being unable to play field hockey, the pandemic has not stopped the field hockey team from continuing their training sessions. This time has allowed the team to grow closer and focus on fine-tuning their skills.

Senior Chloe Swildens has been participating in the team’s pre-season training since September, which is run by personal trainer Lori Holscher. While the pre-season training has required a restrictive structure for it to run safely, the team has not been affected socially.

“There’s not really much of a divide in our team from last year socially. In response to the coronavirus, even though we have to be six feet apart, we can still converse during our activities and workouts that we’ve been doing together,” Swildens said.

The team’s training has been centralized around a variety of abdominal and leg strengthening exercises as well as running to get back into shape. Because the new form of training does not include field hockey practice with sticks, the conditioning has given Swildens a new perspective of the sport.

“I am thinking more about the athletic aspects of field hockey [now]. I’m realizing more about how conditioning plays a role in field hockey, whereas in the past, I thought of it as more skill-based rather than athleticism,” Swildens said.

The girls’ and boys’ water polo teams dove back into the pool during the mid-summer months. Currently, they are training four days a week, working on conditioning and utilizing this time to improve individual elements, such as strength and shooting form. Although this schedule seems demanding, many players including junior Aiden Squiers look forward to this time out of the house.

“You get out of the house more, and it’s just good for your mental health. You’re not cooped up inside and you have an actual schedule to your day,” Squiers said.

While Squiers recognizes that the sport has changed with the new restrictions, he still finds practicing beneficial. Similar to Rosenfeld, Squiers learns it is harder to bond with his teammates.

“I now realize how lucky we were to have those practices where we could actually interact with people. I feel like we took it for granted when we had it because we never knew that this was going to happen,” Squiers said.

The girls’ volleyball team has been unable to practice indoors during this time, however, the team was informed that workouts would begin in October and November, with tryouts for the season starting in December. Although the practice structure is different, having a tight-knit group of players has allowed them to stay close during this time apart.

Senior Grace Mathews, a two-year varsity player, has fostered many friendships through volleyball. Mathews has been able to stay active with other programs while keeping in touch with her teammates before this upcoming season begins.

“Most of the girls on our team either play club or beach volleyball. So for my sister [sophomore Kaley Mathews] and I, we have been able to train pretty much all quarantine,” Mathews said.

Mathews and her teammates have used the opportunity to practice beach volleyball to stay in shape. Even though the transition of returning to indoor play when guidelines loosen will be an adjustment, Mathews believes that having support from her teammates will make the transition smoother.

“We are going to come back stronger mentally after all of this and even more unified because we are all going through this together,” Mathews said.

Unlike many other sports, cross-country got an early start to their preseason, beginning their training in June. Since then, the team has been practicing five days a week with a variation of drills such as sprints and long-distance runs, similar to before the pandemic. Before they began officially practicing, sophomore Daegan Cutter used the summer to continue running by himself to stay in shape.

“Being able to talk to everybody is so much nicer. Running is a social thing for me, so being with people makes it a lot more enjoyable,” Cutter said.

By gaining back the social aspect of in-person practices, Cutter has been able to reflect on how much his sport means to him.

“It’s really significant to my mental health, and when I’m not practicing, it’s hard for me to focus on school. I think it showed me how important this sport is in my life,” Cutter said.

Despite golf being one of the first activities to resume during quarantine, the varsity girls’ golf team has yet to start practicing. While unable to attend official practices many of the girls continued to play on their own over the summer.

Junior Alex Rose has improved her technique by taking advantage of golf courses in the Bay Area, which have been open since April 29.

“Practice always helps. I’ve had time to really focus on the small changes that I can make to my swing to make it that much better. In golf, it’s the smaller changes that make a big difference. I have been able to refine my swing and correct some of the errors I have made in the past,” Rose said.

While Rose has been practicing golf outside of the season, it has been challenging for the team to get together because the team’s new coach was only recently named.

“Right now, I still keep in contact with a few of my teammates through social media or talking on the phone which has been great. It is hard that we’re meeting new people really late in the school year, and we don’t know each other,” Rose said.

Even with the restrictions and guidelines, Redwood athletes have made the most of the situation at hand. Many have found a new appreciation for their sport, which can be carried into the start of the season.