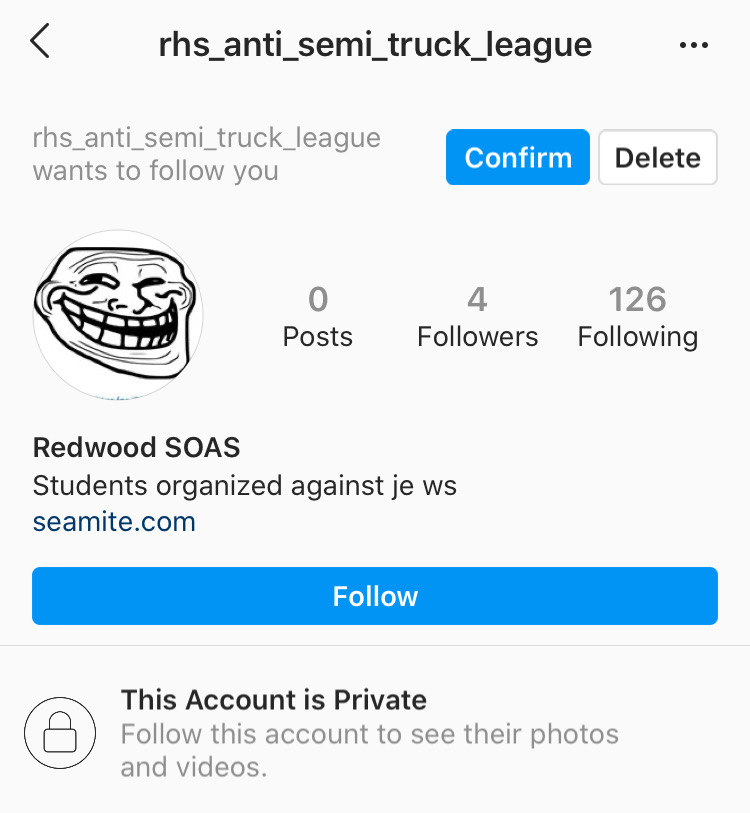 On Thursday, Sept. 3, Instagram accounts promoting antisemitic content were brought to the attention of the Redwood High School administration. These accounts had usernames linking them to Redwood, such as @redwoodhs.soas and @rhs_anti_semi_truck_league, and requested to follow Tamalpais Union High School District (TUHSD) students. Their main content included lists of Jewish students on a “target list.” The accounts have since been taken down, and in an email sent to the Redwood community, Principal David Sondheim confirmed that the incident is being looked into by the district and the Central Marin Police Authority.

Sondheim is appreciative of all of the parents and students who have provided information about the accounts. While antisemitic behavior has happened before at Redwood, Sondheim believes this new behavior is extreme, and Redwood will do all that it can to eliminate these acts of hate. According to Sondheim, the consequences of these actions include suspension or expulsion.

“We work hard to make sure that Redwood is an environment that is fully supportive of all our Jewish students. We do not want to see anybody take these kinds of actions against anybody,” Sondheim said.

Mara Menachem, a Jewish mother of two students from High School 1327 contacted the administration about how they could have handled it differently after seeing Sondheim’s response.

“It should have been a direct email saying Jewish kids were threatened. [Jewish students] were scared. They were even individually reached out to on the site,” Menachem said.

In general, Menachem feels that the Jewish community is too often left out of conversations surrounding the discrimination of certain groups in Marin.

“Even if it’s not Redwood kids, the way that it’s handled, which is to kind of whitewash Jews and lump Jews into other categories with other groups, is troubling because there’s been so much antisemitism here [in Marin], and nothing’s been done about it, really,” Menachem said.

For those who experience or witness acts of antisemitism, organizations such as the global organization Anti-Defamation League (ADL) are available to receive reports and investigate these events. According to the ADL website, it is the leading organization for fighting antisemitism. ADL will not only alert law enforcement but also track the information in order to improve future policies. This includes indicating issues to social media companies to better catch hateful accounts in the future. Seth Brysk, regional director for ADL, believes social media platforms, as well as the people in the community, are able to learn from events like this.

“It’s an opportunity for education. Nobody is born hating. People have to learn how to hate and if they learn how to hate, they can be taught that [this] form of hate is wrong,” Brysk said.

Brysk believes that events like this are not isolated and instead indicate a deeper problem. Though they should never be tolerated, these incidents provide an opportunity for change.

If you witness hateful content in the future, please report it to the relevant authorities including law enforcement, TUHSD administration, and ADL so it can be properly addressed.