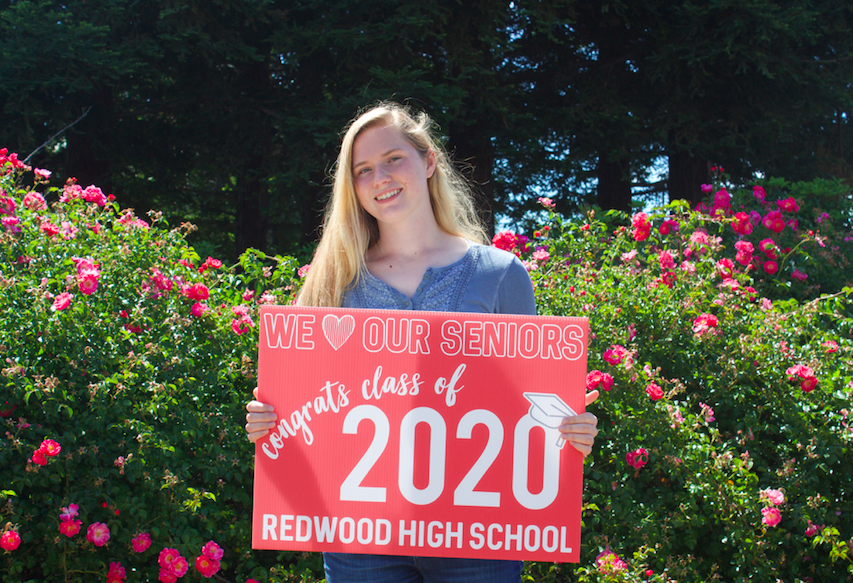 “I was always very interested in the classes I was taking, which made my workload fairly manageable; I’ve never spent a lunch period working on homework, and I’ve been able to spend lots of time with friends, playing field hockey or volunteering,” said senior Eva Oppenheim, one of two valedictorians for the graduating class of 2020.

Oppenheim earned a total academic grade point average (GPA) of 4.6 and a 10-12 grade academic GPA of 4.83. During her time in high school, she took 13 Advanced Placement (AP) classes and three honors classes, while simultaneously enrolling in seven College of Marin (COM) classes and five University of California, Berkeley extension courses.

Tom Sivertsen, who taught Oppenheim for English 1-2 and AP Seminar, values the mindset she has always had about her school work.

“What I love about the way [Oppenheim] goes about her work is that she remains grounded and connected to what’s important when she does her work. She shows a strong understanding of how it relates to the bigger picture of what’s important,” Sivertsen said.

Sivertsen recognizes that while Oppenheim is a gifted student, she is also a hard worker when it comes to school, and she continues to dedicate herself to improving her work.

“[Oppenheim] has always been a strong, thoughtful writer. Even when she first came in the door as a freshman, her work was so insightful. She has become an even more skilled writer than she was from freshman year, though. Her ideas have grown and become even more complex,” Sivertsen said.

Next year, Oppenheim will be attending Massachusetts Institute of Technology and will most likely be majoring in biochemical engineering. She will also be playing on the school’s field hockey team. While Oppenheim appreciates the value of classroom-based learning, she also recognizes the importance of maintaining extracurriculars and social opportunities, including field hockey, physics club and a group of good friends. Despite the numerous activities she is juggling, Oppenheim believes she has learned how to manage her time well.

“Since freshman year, I’ve gotten a lot better at getting things done efficiently,” Oppenheim said. “I’ve learned that if you keep everything happy and enjoyable, it’s not too bad, and you don’t get dragged down by the work.”

Senior Abby Smith, one of Oppenheim’s closest friends since their sophomore year, values Oppenheim’s ability to always make time for their friendship, no matter how many hours of homework and extracurriculars she has.

“[Oppenheim] never lets her school work overcome her or makes you feel less important than her other commitments,” Smith said. “She’s probably the busiest person I know, but she’ll always make time for you. She’ll have six hours of field hockey practice and then a COM class, and she’ll still make time to hang out with you.”

Oppenheim is grateful for her experience at Redwood. As a National Merit Scholar, member of the homecoming court, Marin County Athletic League 2019 Field Hockey Player of the Year, outstanding student athlete, winner of the Marin County Science Fair’s Grand Prize and valedictorian, Oppenheim has had many accomplishments during her time at Redwood. However, she believes one of her biggest takeaways will be the friendships she has built within its walls.

“Obviously there are fun times in the classroom, but the most memorable moments are meeting people,” Oppenheim said. “I’ve met such great friends over the past four years, and I’ve had some really great times just talking with people and connecting with others, learning what they have to share and what you can share with them.”