Unpacking the realities of Greek life: what to expect 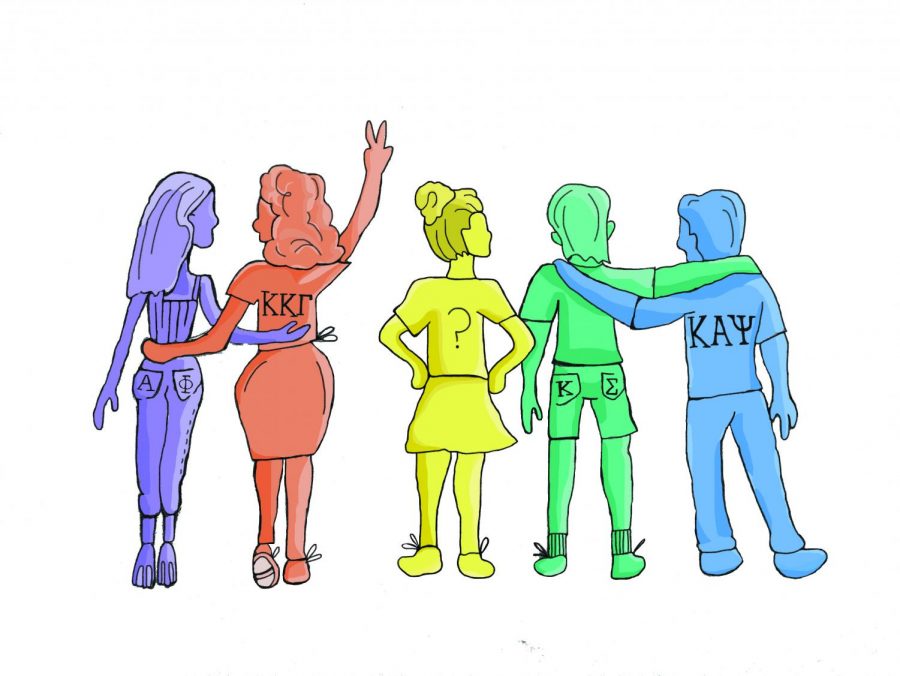 Built on the concepts of brotherhood and sisterhood, fraternities and sororities continue to be a popular form of student community on college campuses across the United States. Each year, roughly 750,000 undergraduate students in 12,000 chapters on more than 800 campuses in the U.S. and Canada pledge themselves to either a sorority or fraternity, according to the Center for Study of the College Fraternity.

Immediately being incorporated into an active social circle on campus allows new students to discover the different opportunities their university or college has to offer. By joining a Greek organization, students are exposed to a network of collegiate members and alumni that can help undergraduates successfully ease into college life. As the new school year approaches, incoming students will have the opportunity to determine if Greek life is right for them.

Before being admitted into a fraternity or sorority, students interested in Greek life undergo a thorough recruitment process known as rush week. Although rush can differ between campuses, they all involve getting to know each house through a series of events.

For sororities, the recruitment process typically consists of four rounds: open house, house tours, skit/philanthropy and preference. After each round, potential new recruits choose their favorite sororities while the houses simultaneously choose participants they would like to see again. If the choices of both the sorority and potential new recruit match, they are invited back for the next event.

Going into Texas Christian University (TCU) two years ago, Redwood alumna Violet Loo knew she would be rushing for some type of sorority. Before she could join her eventual sisters at Delta Gamma (ΔΓ), Violet underwent a series of stressful rounds and events to ensure she was making the right choice.

“Recruitment is all kinds of crazy. All the doors open to the sorority houses and girls are screaming. You go in and talk to girls each round, but it’s super rushed and exhausting,” Violet said. “Last year, being on the other side too was also a little bit achy at points because it can be so superficial and totally based on one conversation, which is a lot of pressure for new girls coming in.”

Similar to the sorority rush process, prospective candidates interested in fraternities become acquainted with the brothers of each house and vice versa to determine compatibility. However, unlike sororities, each fraternity typically hosts informal events, such as football games, barbecues or parties to meet as many recruits as possible. After the process, the houses give out bids to the desired undergraduates.

College can be a daunting concept for any incoming freshmen. For many, Greek life provides a refuge for lost students seeking a group who share common interests.

After graduating from the University of Michigan this past spring, Redwood alumna Kendra Loo says her time as a Kappa Kappa Gamma (ΚΚΓ) not only greatly expanded her social opportunities in college, but also exposed her to different professional groups through her sisters’ contacts.

“Being in a sorority definitely helps make friends right off the bat,” Kendra said. “When you meet [people through a sorority,] they can give you resources and help you if you have academic questions or are wondering if you should take a certain class. Also a lot of times they’ll be in different clubs and organizations that you want to be a part of so you already have your foot in the door in those places.”

Not only do sororities and fraternities foster skills applicable to many jobs, they can also connect job seekers to future employers and business opportunities. University of Texas at Austin (UT) graduate Mike Doyle has firsthand experience of the benefits of the fraternity community in the workplace.

“I still see a lot of my fraternity brothers to this day. Even in one of the investment law firms my brother-in-law and I operate, we named it Sig Brothers [which was] inspired by my fraternity at UT, Kappa Sigma (ΚΣ). It’s a big community that has stayed with me well beyond my time at UT and offered me so many opportunities,” Doyle said.

At the heart of each sorority and fraternity is a national philanthropy, which could include organizations for cancer research, literacy for children and adults, animal welfare or human rights.

According to the National Panhellenic Council 2013-2014 annual report, an umbrella organization for 26 sororities in the United States and Canada, sorority women from across the nation raised over $5.7 million for philanthropies and reported nearly one million hours of community service in that last academic year alone. That same year, fraternity men in the North American Interfraternity Conference, an association of 61 collegiate men’s fraternities, raised nearly $20.7 million for philanthropies and completed 3.8 million hours of community service.

Many chapters also offer leadership positions for various members to delegate responsibilities, log the contribution hours of each member and coordinate fundraisers. In her sophomore year of college, Kendra was offered a leadership position in planning the ΚΚΓ fundraising events. With the help of these University of Michigan events, collegiate Kappas across the nation were able to raise more than $600,000 and contributed more than 140,650 philanthropy hours to campus and local service projects this past year.

“Our philanthropy is [the non-profit] Reading is Fundamental. Every week on Fridays we would go to an underserved community elementary school to read to the students. We would hold a bunch of different fundraisers to do that. We also did an overnight retreat with a bunch of middle school girls to teach them about self-confidence, body positivity, different career paths, women role models and lessons,” Kendra said.

Being in fraternities or sororities can also result in accidents, many of which can be extremely dangerous. Every year for the past two decades, at least one young man has died in association with fraternity hazing, according to Hazing Deaths Database by author and Purdue Journalist Hank Nuwer. From alcohol poisoning to physical injuries, many lives have been lost as a result of fraternity traditions. Despite these incidents, rush continues, pledge classes still perform outrageous ploys and Greek initiations carry on.

For the mother of a Redwood alumna and a University of Southern California (USC) graduate Alexis Robbins, her time as a Kappa Alpha Theta (ΚΑΘ) member was anything but dangerous. Attending formal parties alongside her sisters, supporting charities with elaborately planned events and living in a house with 30 other girls filled Alexis’s time. However, for her husband Chris Robbins, pledge life in a fraternity included a series of embarrassing tasks aimed at proving his commitment to the group.

“As a girl, we were never hazed, but Chris went to Trinity College in Connecticut and for initiation they blindfolded him and drove him to New York. They dropped him off on the side of the road with no money and told him to find a way home. If he hadn’t figured out a way to get back they would’ve dropped him,” Alexis said.

Along with different forms of hazing, drinking is a common aspect of college, especially in Greek organizations. Entering an environment with fewer restrictions than life at home often lures young college students to abuse alcohol.

For Doyle, the rush process and subsequent time in a fraternity required consuming hundreds of alcoholic beverages by the time he graduated. As an inexperienced young adult among similarly inexperienced peers, risk-taking and recklessness could have led to serious harm.

“The scariest part [of binge-drinking] is that you don’t know how to drink at that age and you could do something really stupid. I think the biggest part is figuring out how to drink since you have so much access to alcohol,” Doyle said.

Along with alcohol abuse at sorority and fraternity parties, sexual assault has also persisted throughout the years. According to a 2019 Association of American Universities survey of over 150,000 students at 27 universities on sexual assault and misconduct, 13 percent reported some sort of nonconsensual sexual act. Statistics provided by the Rape, Abuse and Incest National Network also indicate that female college students between 18-24 remain three times more likely to experience sexual violence than men.

As an incoming freshman next year, Senior Lucy Berry, who will be attending Texas Christian University (TCU), is excited to be a part of the Greek system, but realizes she may also be at risk of sexual assault.

“I’m definitely wary [of sexual assault] because I’m a very trusting person and I try to see the best in people, but sometimes that can blind me from [seeing] red flags. Also, being a woman, sexual assault is something that’s on my mind a lot. I know my campus is pretty liberal and proactive so my hope is that they take measures to protect us, but it’s definitely frustrating that the price of being a woman in a sorority, or any situation, means being at risk for assault,” Berry said.

Before joining any Greek organization, a series of application fees and dues are required as well. Depending on the college or university, fees usually range from several hundred dollars to several thousand dollars per semester. For Doyle, joining a fraternity in the late 1990s looked extremely different than applying now, considering housing and extracurricular fees are much higher than before.

“It’s gotten much more expensive [to join a sorority or fraternity]. There’s a lot being done within the Greek system to prevent accidents and to shift liabilities, so now, they rarely ever have any parties at the house. Also, they aren’t allowed to bring kegs in anymore. All of the beer has to be in cans now, so what used to be a couple of $50 kegs is now a couple hundred dollar investment for the night. It all adds up pretty fast,” Doyle said.

For Berry, despite her desire to join a sorority, fees and other expenses will set her back financially.

“I’ll be paying [sorority fees] on my own and it’s upwards of $1,000 a year. I’m definitely anxious about being surrounded by a bunch of wealthy girls because I am not as affluent. I’ll also be working a lot during the school year to pay for college so if I get into a sorority, I may not have time for other extracurriculars,” Berry said.

With various aspects, deciding to join any type of Greek life depends entirely on the potential recruits preferences. However, reflecting back on her time at USC, Alexis is grateful for the opportunity to have met so many influential people in her life.

“I would highly encourage [participating in Greek life] if there’s a strong Greek system to join. I think it’s a great way to make a large community small. Some of my best friends to this day are my sorority sisters from USC and it was just a great time in my life,” Alexis said.