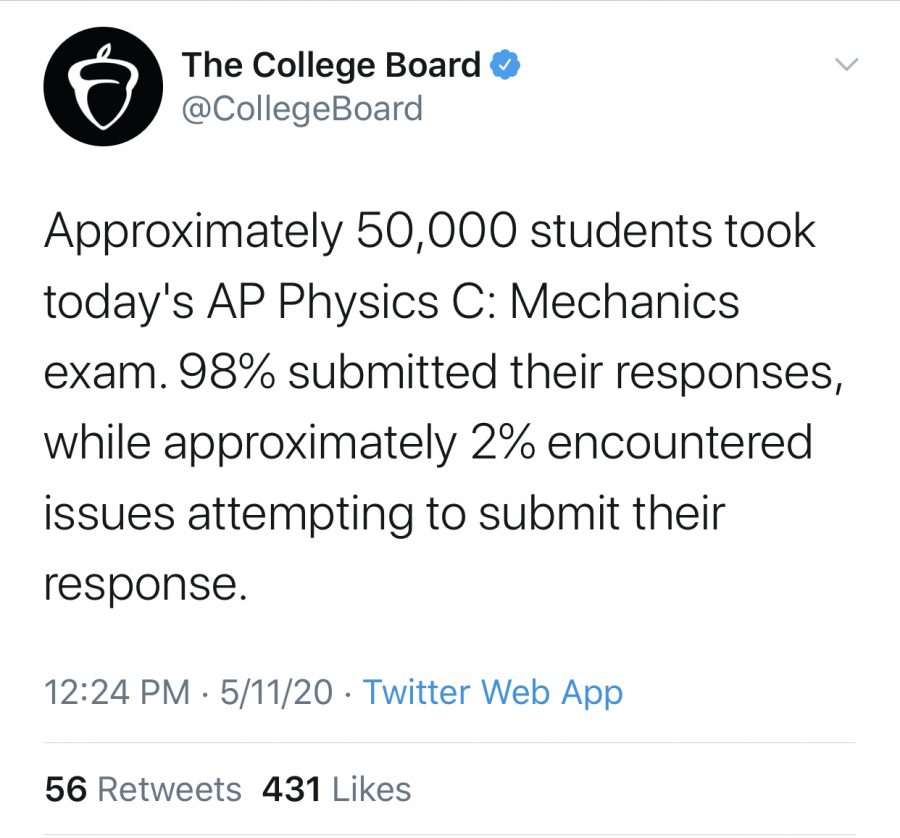 Following the Advanced Placement Physics C Exam, lots of students reported trouble submitting their exams, prompting a response from the College Board over social media. Tweet Courtesy of the College Board’s Twitter Account.

All year long, students in Advanced Placement (AP) courses prepare for exams that take place over two weeks every May. As a result of this year’s unexpected coronavirus outbreak, the traditionally three to four hour long exams were taken at home on an electronic device and shortened to less than an hour in length.

Ann Tepovich, AP European History and AP Economics teacher, is a past AP exam grader and plans on scoring them again this summer. Tepovich’s involvement in scoring is how she noticed the College Board has already been moving in the digital direction. Through teaching both sophomores taking their first AP exam and experienced seniors, she has also witnessed a variety of attitudes towards this year’s online exams.

“I think the seniors were kind of relieved. If there was anything good coming out of this, we simplified exams, [which] is a great thing. The Euro kids didn’t know what to expect. Part of [the process] is going through one of those real testing situations so that in junior and senior year you know what to expect. So [this year’s sophomores] don’t get that advantage,”  Tepovich said.

AP Euro student Rachel Katz echoed Tepovich’s positive feelings towards the simplification of the exam. Reflecting on her first test-taking experience, she noted the benefit of being at home as opposed to the stressful environment in a traditional classroom.

“Because we hadn’t taken a test before, it was kind of easier to prep, because there wasn’t as much pressure. I think for the first AP test, it was helpful in a way to have it be shorter and at home, because it took away from the anxiety,” Katz said.

However, some of the major faults with the online system were revealed within the first week of testing. The website prohibited hundreds of students, who had already completed their exams, from submitting their answers. Junior Adam Beltran is one of the few who have to retake the exam in June after he was unable to submit his AP US History Exam.

“I tried to do the copy and paste [method] first and that was not working…Then, I saw I had a minute and a half left to submit my work. I instead changed to a PDF file, I uploaded the PDF file and [then] I pressed the submit button, probably for like 30 seconds, and nothing happened. Then my time ran out, and it said that I needed to retake the test,” Beltran said.

The College Board followed up with the issues through statements on Twitter, stating 98 percent of students that took the AP Physics C exam successfully submitted, and those with difficulties were in a small minority. Since these challenges were revealed, a backup plan has been implemented for the second week test takers: if a student is unable to submit, they will be given an email address on the “failed to submit” screen where they can alternatively send their answers.

Beltran is glad there is now a clear plan for such incidents, but still feels like the College Board could have had a more effective submission process earlier on, like “a box that you can type your essay into.”

Despite the problems, there are upsides to taking the exams online. Katz believes this year’s experiment effectively shows that students do not benefit from stressful testing environments, and can still show their knowledge through an online method.

“Obviously, they have to fix the technical problems so that people don’t have to take a bunch of retakes. But I think this definitely will show that it doesn’t need to be this massive, three hour test in the middle of the day that puts big pressure on a lot of students,” Katz said.

Tepovich also supports the consideration of a digital switch but feels the circumstances of this year might not be the best case study for its effectiveness.

“We’ll have to see based on people’s experiences with this and how students perform. I think having it as an option makes a lot of sense. I mean there’s a lot of expense that goes into all of those paper tests and finding proctors, finding space, and building time. I think there’s also a lot of drawbacks to this online testing, but we’ll just have to see if the benefits outweigh the cost,” said Tepovich.