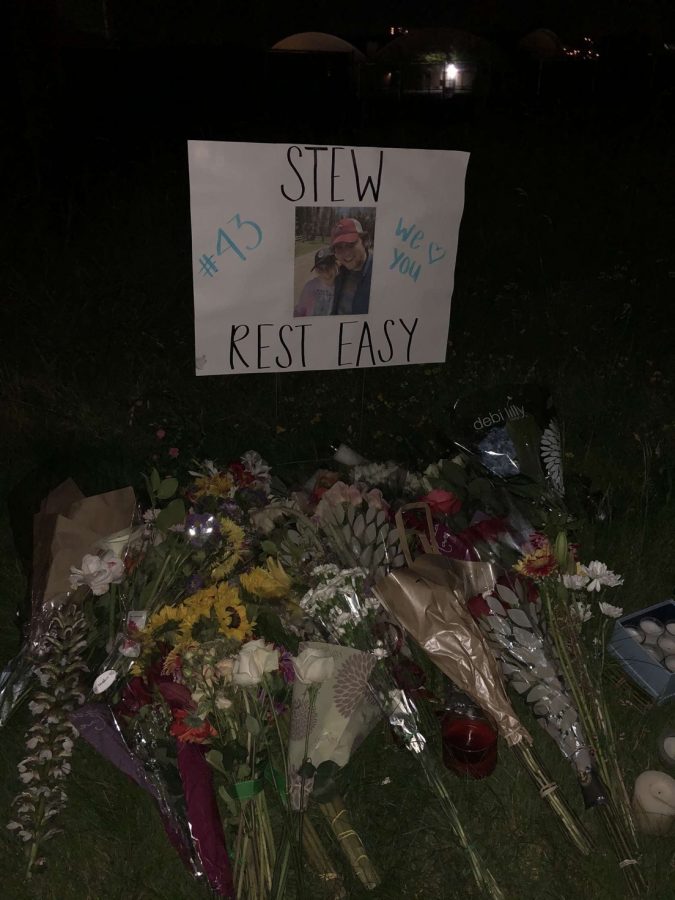 On the night of May 23, students held a vigil to celebrate the life of senior Stewart Fife, who recently passed away in a recreational vehicle accident. The vigil was organized by his close friends, and candles were lit in the arrangement of his lacrosse jersey, number 43. Friends and community members trickled in offering cards, flowers and candles while reminiscing on their fond memories of Fife. Masked faces were illuminated by the flickering candlelight as people united around the tribute to grieve the loss of a friend, teammate, classmate and family member.

According to senior Joe Calzaretta, who came to know Fife through the classes they shared, he and other students felt it was important to find a way to safely memorialize the tragedy together.

“I think it was the perfect closure for everyone. It brought us together,” Calzaretta said. “I miss Redwood and being with everyone so much. [Fife] was able to safely bring us together which is something special.”

According to senior Coburn Brassey, a teammate and close friend of Fife’s, it was important to celebrate his impact on Redwood in his two years of attending the school.

“[Fife] was someone I looked forward to seeing everyday. I’m really glad I got to spend the time with him that I did,” Brassey said. “I know I’m going to miss him more everyday. He really could make anyone laugh.”

Although his family was out of state and unable to attend, they were virtually present to hear the kind words shared by those who knew him. According to senior Chris Fuegner, who became friends with Fife through lacrosse, it was important to connect with his family in saying goodbye.

“Although his parents aren’t here, I’m glad they were able to be on the phone with us and celebrate him with us,” Fuegner said. “I’m sure they appreciated hearing what people had to say and being a part of this with us.”

Similarly, Calzaretta expressed the closure he felt following the memorial through the touching stories he learned about Fife.

“Talking with his parents was really impactful for everyone. The vigil was moving and really one of the coolest things I’ve been a part of,” Calzaretta said. “Everyone that spoke had something really nice to say and shared moments I will think about for a long time.”

Brassey added that he was surprised by the amount of support that night.

“I didn’t expect to see that many people paying their respects. It was awesome to see how many lives [Fife] impacted while he was here at Redwood,” Brassey said.

According to Fuegner, the Redwood lacrosse team continues to find methods of honoring Fife and the impact he had on his teammates. The team retired number 43, meaning future players will not use that number, as a tribute to Fife’s role on the team. Players also proposed an annual award in Fife’s name for seasons to come.

“I think it should be awarded to the most positive player on the team every year. He was always picking everyone else up and making sure players were having a good time,” Fuegner said.

While the team will continue to honor Fife, it will still take time for everyone to feel at peace with his passing according to Brassey.

“I’m not sure the team has found closure yet because we did really care about him, and [Fife] was such a good friend to us,” Brassey said. “I don’t think the team is going to find closure for a while because it’s honestly still so hard to believe he’s gone.”