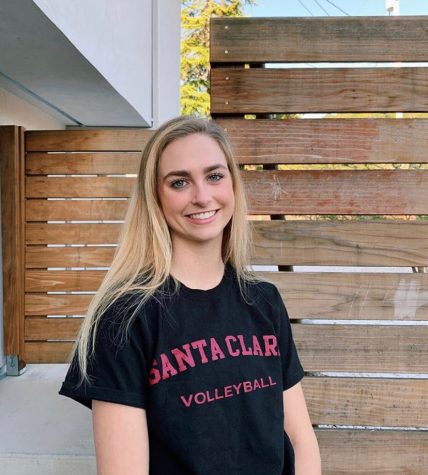 Redwood High School senior Lucy Walsh found out in May of her junior year that she will be a setter on Santa Clara University’s volleyball team in fall 2020, which is a lifelong ambition of hers.

“I had been wanting to go to Santa Clara [University] my entire life,” Walsh said. “ I’d always gone to the camps there. And then I was just given the opportunity one day during my junior year. I was so excited and I committed.”

For Walsh, Santa Clara University was at the top of her college wish list. Walsh knew she was looking to go to a small school in California though she had the understanding it could be difficult to get the opportunity to play volleyball for those colleges.

Walsh started playing the setter position when she was 10 years old and attributes much of her success to sticking with the same position throughout her entire career. Despite her current successes, growing up Walsh was unsure if her skills were college material.

“When I was younger, we all just thought that [playing college volleyball] was kind of out of reach for me. And all my teammates kind of did too. I thought you had to be insanely good to play in college. I didn’t think I was good,” Walsh said. It was hard for her to determine her true skill level at a young age.

However, as her skills improved, Walsh and her clubmates realized that making the transition to collegiate volleyball could be possible. At the age of 15 or 16, Walsh recalls having the realization that the game she once played for enjoyment could truly take her places in her future.

When she was only a freshman, Walsh landed a spot on Redwood’s varsity volleyball team and has been playing on varsity ever since. As a result of being on the varsity team for all four years of high school, Walsh can proudly say that she has seen the team environment change quite a bit. Walsh believes this change has come from the coaches changing around so much.

For 20 years, the Redwood varsity volleyball team had a coach named Katie Peas. Walsh remembers her as a great coach for her freshman year but Peas, unfortunately, quit before Walsh’s sophomore season. Redwood’s next coach was a man named Tahan Minakov who also ended up leaving. Adapting to new coaches is often hard for all sports teams, but the Redwood varsity team persisted through their hardships with the leadership of Walsh.

“The change has been good, it’s been tough for sure going through a new coach every single season of my high school years but it’s definitely been good. I think there was a tougher year which was definitely a bit of a hiccup for us, but besides that, it’s been really good,” Walsh said.

Walsh’s most recent coach, Ursula Gruenert, has truly made a positive impact on her. Gruenert feels similarly about Walsh.

“[Walsh has] a really fun personality. She’s got great energy, she’s good with the girls and she’s a great mentor. So just having her skill on the court constantly, and her hard work was awesome. So being her coach and having her on the team was just, it was a delight. It was so much fun,” Gruenert said.

“As an assistant coach, I was able to have more of a fluid relationship and get to know her better and understand kind of where she’s coming from and her background and her personality,” Gruenert said.

Gruenert watched as Lucy continued to work her hardest as a senior on Varsity even though she was already aware she would be playing for Santa Clara University since her junior year of high school.

“She had nothing to lose but she still wanted to finish out the season on the best, best note possible. Having that energy definitely contributed to our wins and our success last season,” Gruenert said.

And it’s not just coaches that have taken a liking to Walsh. Teammates have enjoyed playing amongst her on the varsity team tremendously. Senior Jordan Perry looks to Walsh as a role model to everyone both on and off the court.

“As our captain on Redwood Volleyball, Lucy was very inclusive to the new players and demonstrated great communication skills. I’m going to miss having her as a teammate once we both head off to college,” Perry said.