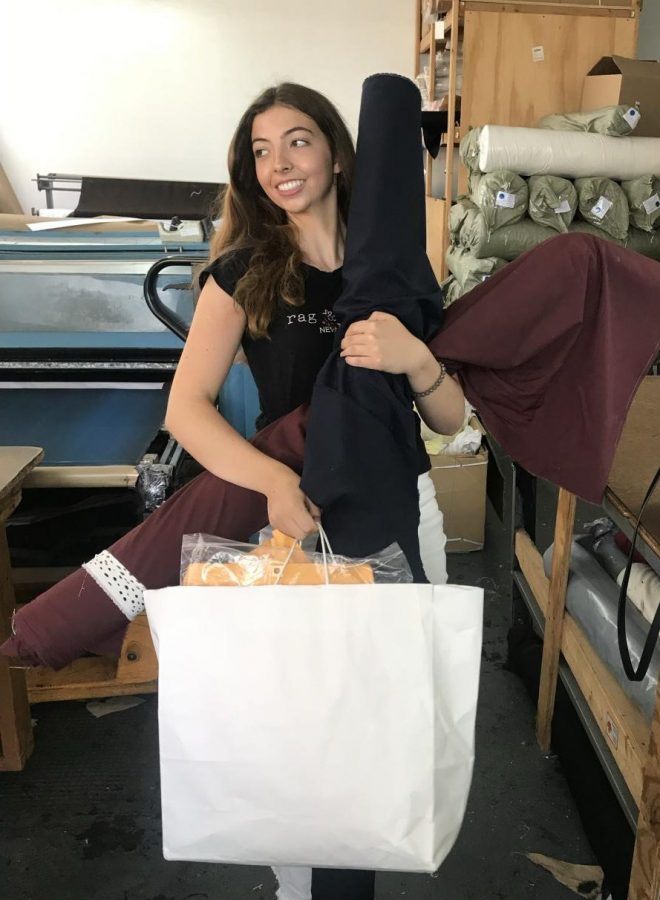 Moseley juggles armfuls of fabric with help from her fellow interns in Lippes’ studio in New York City.

After spending the summer away learning about the art of fashion, senior and aspiring designer Chandler Moseley opens up about the discovery of finding her voice in one of the biggest fashion capitals in the world, New York City. She expresses how going to New York will eventually help her on the right path towards a future in design. Moseley created a website where she writes about how fashion is an outlet to express her voice, something that everyday life doesn’t always allow.

Moseley has been interested in designing and creating clothing and accessories since she was just five years old, but her designs have matured greatly since then.

“As I grew up, my designs grew up too. If you look at my archive, not all of my clothing is something I’d say I’m proud of, but I think each piece I create pushes me forward,” she wrote on her website.

Her expressive pieces caught the eye of renowned fashion designer Adam Lippes, who came to prominence working with designer Oscar de la Renta and has had his own fashion company since 2004.

“One of my family friends [heard I was looking for an internship and] reached out to me saying she’s really good friends with [Lippes,]” Moseley said. “She told me that he was looking for interns this summer and she was going to put my name in. So I ended up going to one of his trunk shows in [San Francisco] where he was showing his clothes and we talked there.”

This past summer, Moseley traveled alone to New York to intern for Lippes at his design company. Moseley’s influences have certainly changed over the years, but Adam Lippes has remained one of her biggest inspirations.

“[Lippes] is a good mentor for someone my age, because he creates designs for someone older while still keeping up with the trends. He has such a youthful presence and he’s overall a really fun person to talk to,” Moseley said. “I learned so much from him this summer.”

Lippes has been a role model to Moseley ever since she began to observe the fashion world. His designs combine both modern and vintage styles to create trendy yet classic looks. He has played a huge role in Moseley’s love for fashion because he too started designing at a young age.

“Working with him was really special because I got to see exactly how [his] fittings worked. I learned the most from seeing what the creative process was like,” Moseley said.

Her first impression of Lippes and his team was one that she would remember for the rest of her life.

“At first it was extremely intimidating working with [the other interns and staff] because most were Cornell grads and I was just a 17-year-old girl still in high school,” Moseley said. “But at the same time, it was kind of liberating, because I was so young and they were so much older.”

Working under Lippes gave many interns the opportunity to bond and share experiences together. Friend and colleague Ruby Jones worked closely with Moseley during the summer.

“It was [Moseley’s] kindness and willingness that made her stand out as an intern, which she definitely did with our bosses. She was eager to learn and take on any task, no matter how small or unimportant. She quickly became known around the office for her hard work ethic and diligence in all that she did,” Jones said. “Though she never questioned what was given to her, she became significantly more confident in her work and adept at unfamiliar things.”

During her ten weeks in New York, Moseley took her designs to the next level when she learned about a popular technique used by designers called textiling. Textiling is the process of creating designs with woven, knitted or printed fabrics or surface ornamented fabrics. Surface ornamentation is where details such as beads or sequins are added to the fabric to create a statement piece. Moseley’s job was to take the patterns and print out about 50 pages of the print and lay it out like a big puzzle to create a design layout.

Moseley’s hard-working character caught the eye of Lippes and he promoted her to assist him.

“Eventually, I was able to help him out with fittings, which is a very prestigious role as an intern, and only a few are selected. I was their youngest intern and was asked to stay on longer. I ended up working [with Lippes] for 10 weeks and loved every second of it,” Moseley said.

After she returned home, her sister, sophomore Morgan Moseley, noticed a dramatic change in her sister’s sketches.

“Before New York, a lot of the clothes that she would design were similar to styles that you would see here in Marin,” Morgan said. “[Now] the designs she creates [show] a new perspective and look like they were inspired by different artists.”

To check out more of Chandler Moseley’s designs and learn about her experiences, visit her website at chandlermoseley.com.