Sushi in Marin is on a roll

Marin County is home to a wide variety of food. Whether it is Burmese, Indian, Italian or Mediterranean, Marin has it all. Among these diverse choices is the Japanese cuisine, sushi, which has become widely popular in the area. Due to sushi’s rising popularity, restaurants have spread across the county, causing an increase in their prices as well. The Bark investigated in order to find the best sushi restaurants not only for your own personal enjoyment, but also for your wallet’s well-being. Here are the best sushi restaurants in Marin.

Located in Larkspur’s Marin Country Mart is the restaurant Sushi-Ko. The brightness of the restaurant’s interior welcomed me in, and I was greeted by a polite hostess who seated me almost immediately. There was plenty of seating around the entire restaurant and even bar seating for the sushi bar, which extends across the majority of the restaurant’s width. Behind the bar, chefs prepare fish and rolls for customers to enjoy. The menu presented a wide variety of food choices, but after much d

eliberation I finally decided on the Alaskan and Ikura rolls. The Alaskan roll was filled with avocado and topped with tuna, while the Ikura roll was covered with salmon roe priced at $11.30. Service was quick, with all staff members participating in taking orders and bringing food to their customers. When I took my first bite I was surprised by how fresh the fish tasted, almost as if it were caught that day. Each bite was more delicious than the last, as the fish tasted authentic and natural.

King of the Roll ⅖ :

One of Larkspur’s many small restaurants on Magnolia Avenue is King of the Roll. If you get claustrophobic, opt to sit in the abundance of outside seating both in front of and behind the restaurant. The restaurant is filled with employees running around and checking on the tables with customers. I chose the dinner special which came with miso soup, a side salad and the choice of two sushi rolls. Service was a little slow due to the disproportionate ratio of employees and customers. However, upon receiving my food, I was pleasantly surprised by the amount I received. I left feeling full, though slightly claustrophobic. The dinner special was priced accordingly at $13.95 with a proportionate and tasty portion.

The Oyama restaurant in Greenbrae’s Bon Air shopping center provides both indoor and outdoor seating for customers to dine. Though the fairly small restaurant is always packed with people, the great service more than made up for the crowd. When I first saw the picture-filled menu, I was excited about all of the delicious options, but also conflicted with which to pick because there were so many. Finally, I picked one of the most visually appealing options, the Cherry Blossom roll, with a side of miso soup. Altogether, my meal was $22.45 with the roll amounting to $15.95. Though the entire dish was on the pricier side, the amount and quality of the sushi and soup made Oyama the best restaurant. The Cherry Blossom roll consisted of an avocado filled heart-shaped roll with salmon on the sides. When I received the roll, I was astonished by its presentation. This dish would be perfect to share on a date or dinner with loved ones, due to its romantic shape. Although the Cherry Blossom roll tasted like any other salmon avocado roll, its presentation elevated it to a culinary masterpiece.

Right off of Redwood Highway in Mill Valley is Robata Grill & Sushi, which was packed with customers throughout the large and low lit restaurant. The sushi bar was unlike any other I had seen, decorated with stone and including a wood furnished bar table. The bar had two long wooden paddles that the chefs would present one’s meal on to serve with. There was so much variety on the menu, which made my ordering decision very difficult. I decided on one of the menu’s makimono’s specials, the 49er Roll priced at $16.50. This roll was pretty expensive for its small size, but the taste was worth it. The 49er roll is a tobiko roll filled with avocado and topped with salmon and a slice of lemon. While I was waiting for my dish, I was given a warm wet towel to clean my hands with. This comes from the Japanese tradition of “oshibori” where wet towels are handed out for those who are about to eat. Soon after, I received the 49er roll and was surprised at its exquisite appearance. The thin lemon slice also added a new element to the roll which was delectable. 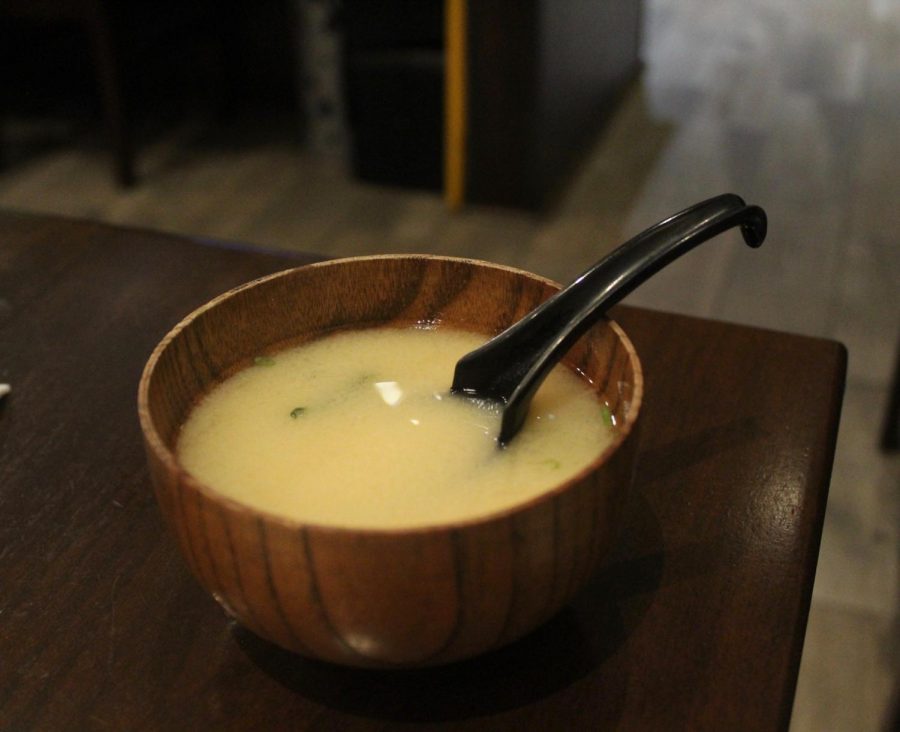