Teaching girls more than just how to shoot a ball: Stella Neuschul’s “The Others” Camp 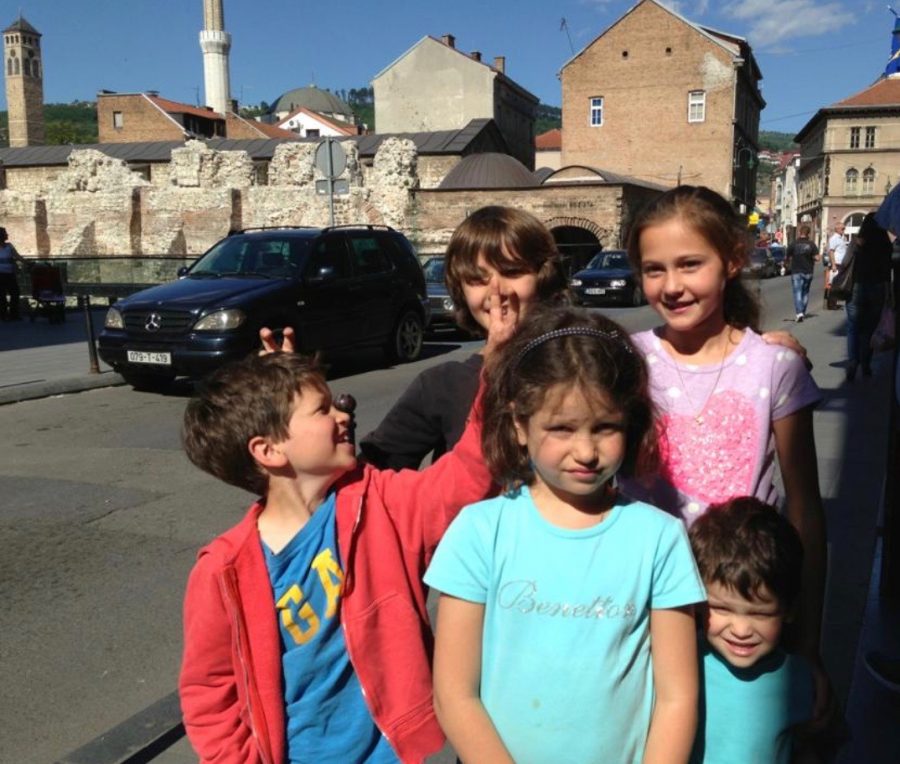 Moving to the United States when she was eight years old, Neuschul had lived in Bosnia during her childhood.

“All persons born or naturalized in the United States and subject to the jurisdiction thereof, are citizens of the United States and of the State wherein they reside,” the 14th Amendment states, clearly outlining that everyone born in the U.S., regardless of race, religion or gender, is a citizen. However, in Bosnia and Herzegovina, Bosniaks, Croats and Serbs were established as the constituent peoples based on the 1995 General Framework Agreement for Peace in Bosnia and Herzegovina (Dayton Peace Accords), giving solely those ethnic groups representation in government. All other citizens not declared as constituent peoples, including the Roma and Jewish, were designated as “the Others.”

Originally from Bosnia and Herzegovina, junior Stella Neuschul moved to the United States when she was eight years old, but still remembers the division present in her birth country.

“There were a lot of Gypsy kids or Roma kids that I grew up with, and they were like any other kids, but they didn’t have the same privileges as me. They didn’t get to go to a good school. They would just hang out on the street and beg for money,” Neuschul said. “Things that really stood out to me were the way they dressed. They rarely had shoes and would ask me to borrow some of my clothes. Some would be involved in illegal things that I never thought, as an eight-year-old, even existed.”

Inspired by these memories, Neuschul is now working to elevate some of “the Others” through a basketball camp she is organizing in Bosnia and Herzegovina that teaches Roma girls how to play the sport. According to Neuschul, both learning and playing basketball will allow the girls to enjoy an activity that is not forced upon them by their families and culture, a common occurrence in that country. She also believes the camp gives these individuals something to look forward to doing this August.

Neuschul wants to create her camp because of the discrimination these girls face. While it was not blatantly apparent to her when she was younger, Neuschul began to understand the severe disadvantages her counterparts faced as she grew older.

“I usually go back every summer, so I still see those kids. I just see [the country] through a different perspective now, knowing what it’s like to be a lot more privileged than everyone there. But I learned about the inequality mostly through conversations with my parents,” Neuschul said.

Neuschul’s mother, Vedrana Pinjo, believes that it is important for her daughter to be aware of what is happening in her birth country, especially because Neuschul still has strong familial ties there.

“Being bilingual is also being bicultural. [Language] is also about understanding the culture of the language that you’re using…I have a Gypsy friend who’s an amazingly accomplished, intelligent and wise young woman, so Stella had the opportunity to meet her,” Pinjo said.

Pinjo’s friend, Selma Selman, is now a successful Roma artist. According to Pinjo, what allowed Selman to thrive beyond cultural expectations was one person “taking a chance” on her and giving her the resources to succeed. Now, Selman works diligently to do her part in helping the younger generations of Roma girls by providing them with food so that they can stay in school.

When Selman visited Pinjo and Neuschul in the Bay Area last year, she told stories about the success of her nonprofit. Seeing the remarkable impact Selman’s actions had on the Roma students left Neuschul wondering how she could help as well. Selman recommended that Neuschul could give back by teaching the Roma girls a skill of her own, and she put Neuschul in contact with a school from Selman’s village in Ruzica, Bosnia.

It only seemed natural for her to teach kids how to play basketball. Neuschul began playing when she lived in Bosnia and Herzegovina, and it has been an integral aspect of her life since. She has played on several club basketball teams and is also on the varsity girls’ team at Redwood.

“[Basketball] is the only fitting thing that I can possibly think of that I’m good at and that I know how to teach to someone else,” Neuschul said. “It gives me time every single day to just devote myself to something I really love. I choose to be [on the court] with the teammates I’m with and spend two to three hours every day practicing.”

Once her vision of how to benefit Roma children was complete, Neuschul took action by setting up a website explaining her mission, coordinating with the Bosnian school and the 10 girls who will participate in her camp and creating a GoFundMe fundraiser. According to Neuschul, the camp will occur from Aug. 3-7 where she will run the girls through different drills, provide them with new equipment and gear and spend time with them to connect on a personal level.

“[The camp] shows that she really cares about other people and about the girls in Bosnia who don’t have access to these kinds of programs. She’s well aware of this and she wants to help out. [Her actions] make sense because she’s a very caring person,” Allen said. “I’ve taken away that if you really want to make a change, you can. It’s not impossible.”

To date, Neuschul has raised $2,240 of her $6,500 goal on GoFundMe. She plans to donate any extra funds to Selman’s nonprofit.

While Pinjo has been supportive of Neuschul throughout this entire process, she recognizes that Neushcul’s work will only be meaningful if real results occur from the experience.

“Making initiatives in a vacuum of reality is useless unless you really see that there’s continuous support and relationships being formed. It’s not enough to teach somebody to throw a ball—that obviously is not going to be the purpose or the focus of Stella’s initiative,” Pinjo said. “I would like to see her become a mentor for them, somebody that they can rely on that they can be charged to.”

To help support Neuschul’s mission, visit her website or donate to her GoFundMe campaign called “The Others Camp.”