Creators of the Spirit Ball reveal its story 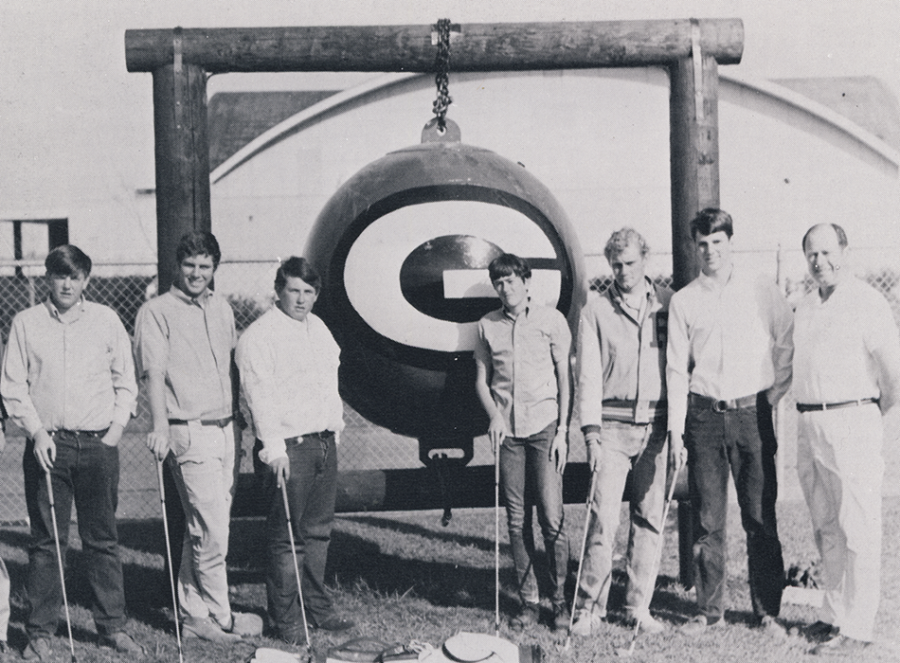 Two weeks ago, a couple of Redwood students armed with several cans of spray paint took part in the age-old tradition of repainting the Spirit Ball. Like many Redwood organizations and sports teams, the two sprayed over the previous layers of paint, giving the Ball a bright, gleaming, new look.

But what set this makeover apart from the others was that these Redwood students were both 60 years-old and had graduated with Redwood’s Class of 1971.

After 42 years, Mike Massoletti and Steven Hammersly returned to their alma mater recently and “restored” the Spirit Ball, or ‘The Big G’ as they called it, to its original look. The grand sphere shines today just as it did when it was originally installed with its red background layered with a white ‘G’ and a black circle, reminiscent of the Green Bay Packers logo.

When Massoletti, Hammersly, and a few of their teammates first installed it in 1971, the new Redwood icon soon became a cornerstone of school spirit.

They needed a little spirit that year. Redwood’s football team in 1970 finished with a record of 1-8-1, just a year after the 1969 team made it all the way to the MCAL championships before losing the title to the undefeated Terra Linda Trojans.

“It started out as a way to create excitement and unity amongst our football team,” Massoletti said. “We were kind of struggling that year coming from a very spectacular year prior.”

“It was our senior year so we were looking for that same kind of momentum and a way to go out in style… We kind of thought of it as a prank. We were just having fun, something reckless. It was something interesting to do, a construction project. We didn’t have to go through any kind of approval process. It was a freedom of expression to do what we wanted to do and we did it.”

Massoletti came up with the idea of the Spirit Ball from a tradition he had seen between UC Berkeley and Stanford–the Battle for the Stanford Axe.

“I remember watching a game of some college sport and they were talking about the rivalry of the two schools,” Massoletti recalled. “Centered in that rivalry was who was going to get the Axe–the trophy at the end. And this year somebody had stolen the Axe, so there was a lot of energy around that. It sparked a nerve and I thought it would be kind of cool to do something like that for us.”

Massoletti came up with a plan to steal a giant, spherical buoy and make it Redwood’s version of the Axe.

Steel buoys were used in San Francisco Bay to help mark where ships could safely travel without running into shallow waters. When sonar was invented, there was no longer any use for these buoys, so many were hauled out of the Bay and placed on a plot of land in Corte Madera. Today, that plot of land is home to Hertz Equipment Rentals on Paradise Drive.

Not only did Redwood coaches Phil Roark and Bob Troppmann both support the plan to steal one of the abandoned buoys, but Troppmann actually let the group of football players take his truck during a lunch period to pick it up.

“We blocked out all the markings on the truck. In was a powder blue Chevy Fleetside truck. He had his football camp logo on each of its sides, so we taped over that with paper towels and we did the same thing with the license plates,” Massoletti said. “Everyone in Marin County knew what that truck was. We went over there in that truck and we struggled with it, but we got it in the back of the truck and raced back over here,” he said.

“The whole time the ball is rolling around in the back of the truck. The three guys who were in the back were doing everything to prevent being crushed. We got it in the woodshop and proceeded to start stripping it out and cleaning up the paint.

The hollow steel ball, roughly five feet in diameter, was taken to Roark’s woodshop classroom where it was painted.

The group of senior boys then created a base for the Spirit Ball which, at that point, was located roughly where the giant ‘R’ is placed on the track today.

The shrine of the Spirit Ball was completed by a Redwood tree on either side of the ball next to the telephone poles.

“The football team for a prank one year dug a big hole in the middle of their own football field at the 50-yard line and buried it,” Dibley said. “And not much was sticking out of the ground.”

Roark figured that in order to prevent something like this from occurring again, he would have to secure it with a new base, using his knowledge and resources that he had acquired from teaching woodshop at Redwood.

“Coach Roark created the base and the stand, which looks almost like a golf ball on a tee at this point,” Dibley said. “It’s all rebar and brick and cement, and he mounted it where it stands today.”

Roark’s structure was put to the test in the late 90s by another group of near-graduates trying to complete their senior prank.

“Some kids one year thought for a senior prank, ‘Hey, we’re going to hack that thing off of there.’ They came with sledgehammers,” Dibley said. “I talked to them later and they said they were out there for about four hours and there were about four or five guys hacking away at the thing, but Coach Roark set that thing right. If you look, the base isn’t a perfectly square set of bricks and rebar. It’s been chipped away, but after four hours, five teenage boys could barely put a dent in it.”

According to Hammerly and Massoletti, the ball used to echo if it was slapped, but today that echo is very difficult to hear, if it is present at all. The two creators estimate that there is about five inches of paint and papier mache layered onto the buoy, which is the sum of 42 years worth of makeovers by sports teams, band kids, drama kids, Barkees, AP Art students, and even vandals from rival schools.

“I tell the freshmen every year it started out the size of a volleyball and after years of paint it has grown to be that size, and they believe me until I have to fill them in,” Dibley said.

There are two noticeably large dents around the Spirit Ball, which, according to Hammersly and Massoletti, have been there since they first picked it up. The dents likely came from ship collisions from the Spirit Ball’s time in the Bay.

Located just a few feet from the street, the Spirit Ball is easily visible by drivers passing by.

“A lot of people don’t realize that that road right there is really a road,” said PE teacher Mike Dibley of William Avenue, the road that passes by San Andreas High School and leads to Redwood’s front parking lot. “People who live in the community over there, they drive through also, so it’s not just kids that see it. So a lot of people see that, more than you would think. Get your message out, paint the ball!”

“We brought this thing out on Homecoming rally,” Massoletti said. “It was near the end of the season and we were kind of depressed with our heads down feeling dejected. We put the ball back into Coach Troppmann’s truck and we drove it out onto the field. It took a couple laps on the dirt. After the rally, we backed the truck up to the frame and everyone helped put it back into position.”

Massoletti said he was pleased to return to Redwood to find that his creation still stands today.

“It’s heartening to know that it’s really still here and still being used,” he said.