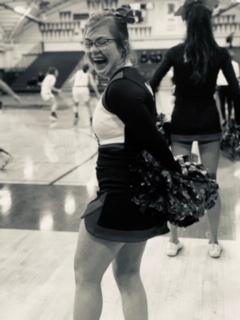 Sophomore Grace Carter has danced since she was a toddler, so it was only natural for her to join Redwood’s junior varsity cheer team last year. While she may blend into the lines of red and white uniforms during halftime shows, outside of cheer, Down syndrome and apraxia, a neurological disorder that makes it difficult to perform familiar movements, affect her cognitive behavior and speech abilities. As she paves new paths for students in special education programs, Grace is also becoming more confident in herself and her abilities.

According to her mom Valerie Carter, Grace was diagnosed with Down syndrome at birth and has been overcoming challenges caused by her condition since then.

“Everybody was just charmed by her. She has a real can-do attitude, so anything that was hard for her, she just never gave up. Whether it be sitting up or walking for the first time or saying her first word, she never gave up on anything. She’s a hard, hard worker. And that attitude, that positive attitude…really inspired all of us,” Valerie said.

“Grace is the first student I’ve ever had who is participating [in general education sports], so it’s cool to see her, and she’s been skyrocketing with all of the benefits of that,” Peter said.

Cheer has given Grace an opportunity to express herself, which has translated into lifestyle improvements.

“She’s a different person. When Grace first started [cheer], she needed a one-on-one [aide]. She was much more shy…but once you get to know Grace, she’s not shy at all. She’s very outgoing. She’s very social. She loves being the center of attention and being a part of the group. Dancing and movement is a way for her to really express herself,” Peter said.

While sports are more difficult for Grace because of her disabilities, she has been able to work with coaches to plan modifications in cheer so that she can participate equally to her teammates.

“There have been many times I watched the videos and I can’t even find Grace. She just blends in so flawlessly within the routines and has the dance parts all down,” Peter said.

According to teammate Chloe Bishop, Grace adds positivity and character to the team.

“She always steps up to do cartwheels in the dance and she works really hard to learn all of the dances and be nice to all the girls…She’s always the first to run over and be there to be part of the team,” Bishop said.

With the conclusion of cheer season Grace has extended her passion for movement to a second sport, a feat uncommon among general-education student athletes. During the spring season Grace participates on the JV swim team without modifications, an accomplishment both her and Valerie are very proud of. Valerie is thankful that Grace has the opportunity and ability to participate in Redwood sports, as it positively correlates to her mood and independence.

“You either have people that are passionate and positive or cranky and unhappy. She’s definitely not cranky or unhappy. She’s a very happy person,” Valerie said.