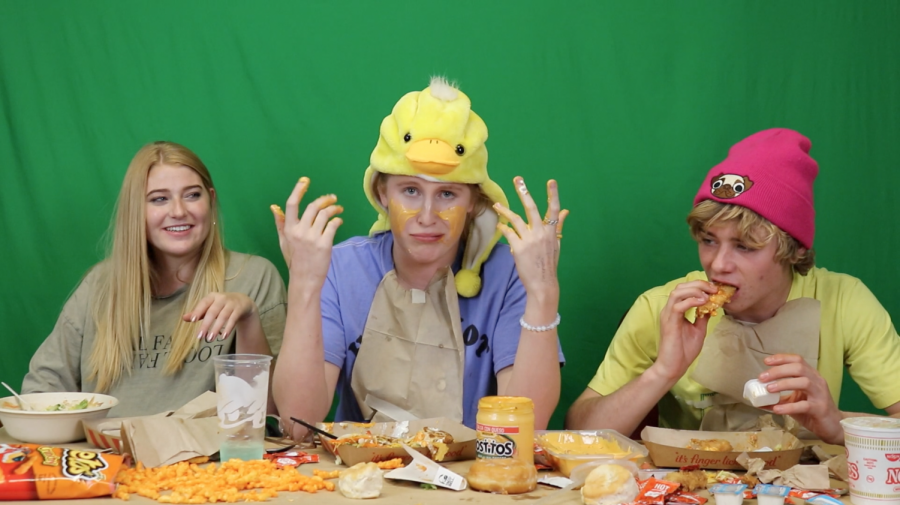 Mukbang is a combination of the South Korean words “meokneun” (eating) and “bangsong” (broadcast), and features a host who eats an enormous amount of food in front of a camera while interacting with an audience, according to the China Global Television Network. It became popular in South Korea in 2010 and has since become a worldwide trend.

In this video, I will be interviewing seniors Whitney Johnson, Anya Klein and Hudson Hitchcock. Johnson chose her favorites from Taco Bell: the crunchy three taco supreme, the crunch wrap supreme, Doritos locos tacos and a steak “quesarito.” Klein ate her preferred choice of a Word Wrapps bowl. Hitchcock tried the new Kentucky Fried Chicken (KFC) fried chicken and donut meal while testing the maximum circumference of his mouth.

Viewers will undoubtedly be entertained by Johnson’s constant chaotic energy. Klein will reminisce on her most impactful childhood memories, including the origin of her snort laugh. Hitchcock will delve into his most traumatic life experiences: being flashed on the freeway (twice) and discovering his gag reflex.

Mukbang is a controversial topic. This video may not appeal to older generations or most governments outside of the U.S. In July 2018, the South Korean government announced that it would create and regulate mukbang guidelines by launching the “National Obesity Management Comprehensive Measures” with the aim of establishing guidelines for mukbang because it could cause binge eating disorders and impair the public health.

Though alarming, Johnson’s food consumption in this video is actually quite normal for her—she admitted her unsatisfied hunger at the end of filming. Enjoy this comedic mukbang video, and watch at your own risk!