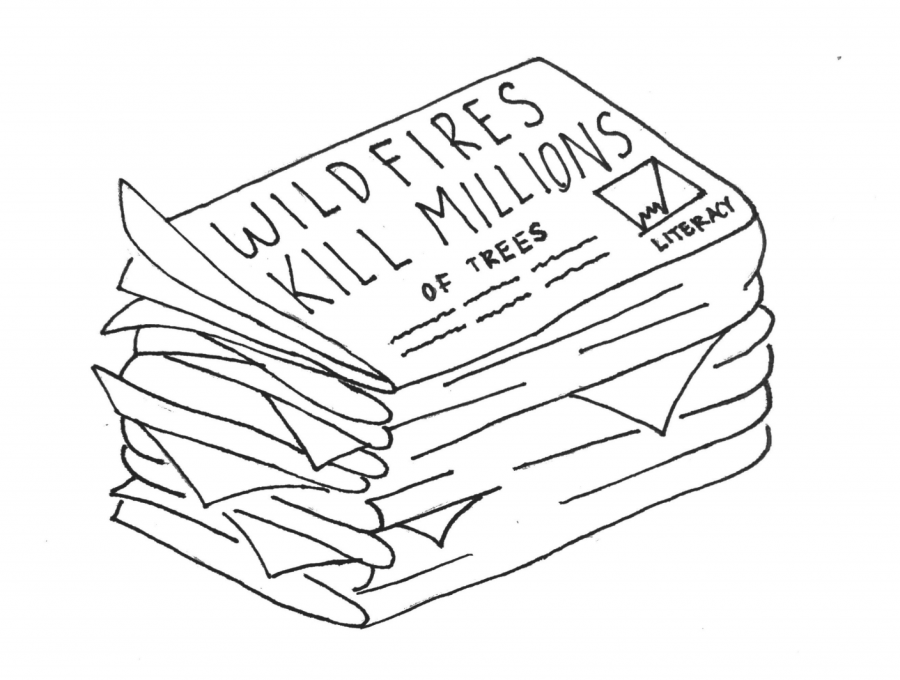 With even the slightest glance at the news, it seems as though the world is coming to an end. Gun violence, viruses, climate change and Trump’s antagonistic tweets plague social media outlets, influencing thousands of readers. Even at Redwood, the halls and classrooms are filled with disheartened students discussing the most recent atrocities. Living in affluent Marin County can sometimes feel like being insulated from the rest of the world, and this tends to play a significant role when it comes to the limited knowledge of occurrences outside of the county. Because of this, Marin residents rely on the news to provide an accurate portrayal of the state and events of the world. However, this reliance has its flaws. According to Journalistic Studies Volume 20 (JSV), the media neglects to mention long-term positive trends, instead choosing to focus on sensational short-term events that are predominantly negative. This can cause a misperception of reality and negative views of the world for readers.

Despite what the media may dictate, according to the New York Times and Our World in Data, 2019 was the best year in human history in terms of mortality rates, literacy, women’s education, poverty levels and more. As readers, we need to take responsibility in understanding that the media tends to provide coverage on sensational events while neglecting longer-term trends and to take that into account as we read and process the news. In addition, as a reporter for the Bark, I understand that media outlets must strive to present an accurate representation of reality.
According to the New York Times and the United Nations’ Department of Economic and Social Affairs, in 1981, 42 percent of the global population lived in extreme poverty, whereas in 2018, a significantly lower estimate of 8.6 percent of the population lived in extreme poverty.
Additionally, the world is approaching a 90 percent literacy rate, according to Our World in Data, and the New York Times states that the child mortality rate in 1990 was 12.58 million people compared to a much lower 5.42 million people in 2019 despite a rapid increase in global population.
While this news should be expected, as science, technology and human rights are always progressing, it can be shocking to learn about how far humanity has come in so little time, especially when media outlets tend to spread the opposite message.
According to JSV, “The media’s tendency to be strongly event-driven can be highly consequential as the presentation of examples of engaging events rather than base-rate information is more vivid and attractive to readers or viewers.” This theory enforces the idea that media outlets specifically choose the more “interesting” articles to draw in potential readers. In turn, this affects readers’ perception of current events around the world because short-term news tends to sell more.
For example, the Equal Rights Amendment (ERA), a constitutional amendment that formally acknowledges women’s right to equal treatment, has finally been ratified by 38 states as of Jan. 15, 2020. The ratification process was painfully slow and serves as a reminder of the 48 years of struggle to officially establish legal equality between all sexes. While this is an enormous accomplishment, it is overshadowed in the media by sensational stories that are more short-term and therefore more likely to draw readers in. For example, I easily found countless top stories that deeply analyzed the British prince and princess’s decision to renounce their royalty, but I had to scroll to the bottom-most corner of news websites to track down any story about the ERA. Although the two events occurred within one week of one another, with the 38th ratification being more recent, the media’s coverage of the events remained disproportionately in favor of the royal scandal.
According to JSV, when negative news is over-represented and exaggerated, the public tends to overestimate its frequency, leading them to make assumptions based on inaccurate information and pessimistic misconstructions of reality. According to the same study, “Media exposure has been related to increased fear of and concern about crime despite declining trends in crime, social reality judgments regarding race, and reinforced imitation of suicide by frequent reportage on suicide.”
Some people may argue that news outlets cover the most buzzworthy and therefore the most important news. However, positive long-term trends are just as relevant. News outlets shouldn’t cut out the short-term events, but instead need to present to the public a balanced perspective of reality that is representative of both humanity’s progress and its problems.
Citizens must keep in mind that the world is not completely falling apart and that there are mitigating trends that the media under-reports. We should take hope in our collective ability to create positive change as demonstrated by these long-term progressive trends. It’s important that we reflect on our evolution and allow it to inspire us to continue seeking solutions for the problems that still plague the world.