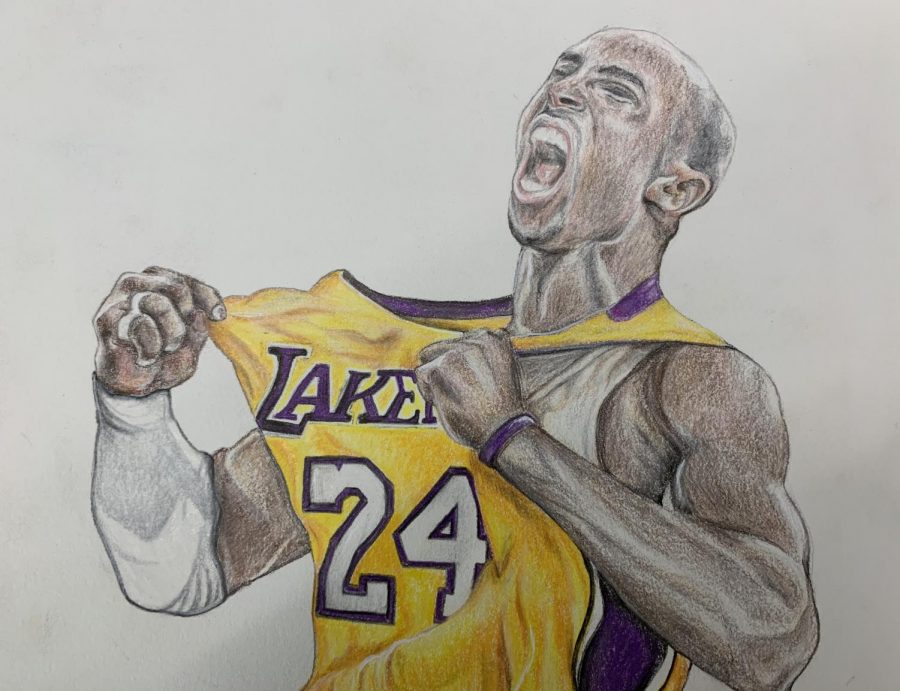 On Jan. 26, Kobe Bryant, his daughter Gianna (Gigi) and seven others were killed in a helicopter crash in Calabasas, California. The news concerning Bryant, who was on his way to his daughter’s basketball game, devastated many former and current Redwood students.

What stood out the most to those who idolized Bryant was his unmatched work ethic, competitive nature and incredible will to win, evident in his five National Basketball Association (NBA) championships, 15 All Star appearances, four All-Star MVPs, two finals MVPs, regular season MVP and pure determination on and off the court. Bryant made many young fans, who watched him play in his early years for the Los Angeles Lakers, fall in love with the sport.

For senior Max Costa, Bryant was the reason he started playing basketball at six years old. As Costa got older, he started to realize that Bryant was much more than a basketball player to him.

“I got to the age where I started to understand what he stood for: his mentality, his competitiveness and his willingness to be the greatest possible [in] anything he did,” Costa said.

Throughout his time playing basketball, Costa experienced severe injuries such as a dislocated elbow, but played basketball through the pain because of his love for the sport, largely instilled in him by Bryant.

“If you want to have greatness in any aspect of your life, that’s the guy you look to and that’s what I have always done,” Costa said.

Like Costa, senior Cole Panzardi felt Bryant’s influence from a young age. His first memory of Bryant was from watching game seven of the 2006 NBA finals against the Boston Celtics. Even though Bryant and the Lakers ended up losing the game and ultimately the series, Panzardi fell in love with Bryant’s will to win and his intensity on the court. From that moment on, Panzardi looked up to Bryant as his favorite sports figure, like many other kids around the world who had the chance to watch him compete. Similar to Costa, Panzardi learned an extremely valuable lesson from Bryant.

“He was someone who would beat you on and off the court. After the game, on nights off and in the off-season he would still be working. He sent the message that if you really work hard enough, you can achieve what you want to achieve,” Panzardi said.

The news of Bryant’s death reached much further than Redwood’s walls. Redwood graduate and freshman at the University of Colorado Boulder, Evan Solter, was disheartened by the passing of the basketball legend. In an Instagram caption posted just hours after Bryant’s death, Solter opened up about how Bryant helped him through the tough times in his life.

“When I was doubted, he was the one that helped me prove them wrong. When I was tired, he was in my mind pushing me to go even harder,” Solter said.

While people across the globe mourned the tragic death of Bryant, eight other lives were lost on that Sunday morning. One was Bryant’s 13-year-old daughter Gigi, the only one of his four daughters to play basketball. Both Costa and Panzardi acknowledged that she was very advanced in her knowledge and skills for a 13-year-old. Panzardi saw her as someone who could go on to continue the Bryant basketball legacy.

“Someone who is the daughter of one of the hardest workers in sports history probably would have gone on to do great things,” Panzardi said.

Costa added that, while he strongly admired everything about Bryant, Gigi could have also been a figure for young girls and boys who got the chance to see her play professionally.

After Bryant’s death, the sports world lost more than an NBA legend, but also a huge advocate of women’s athletics. Bryant, who became a follower of women’s sports after becoming the father of four daughters, was very involved in the Women’s National Basketball Association (WNBA) and Women’s National Collegiate Athletic Association (NCAA). Bryant became a mentor to many female basketball players and could be seen courtside at various WNBA and NCAA games with Gigi, who aspired to play at the University of Connecticut and progress to the WNBA.

Being an advocate for women’s athletics also played a role in Bryant regaining the trust of the public after being charged with felony sexual assault in 2003. Although the civil suit was settled out of court in March of 2005, the public view of Bryant shifted. Bryant had recently welcomed his first daughter into the world and had been married to his wife, Vanessa, for two years at the time of the incident. According to the New York Times, the accuser’s name was leaked to the press multiple times, and was one of the reasons why she eventually dropped the case and settled it with Bryant out of court.

The assault allegations knocked Bryant off his pedestal. Since his death, the debate over how much of an impact this incident should have on his legacy remains. Nevertheless, the recovery of his reputation could be attributed to the love he showed his wife and four daughters and his relentless promotion of women’s athletics.

Female professionals in the industry have also reflected on Bryant’s legacy. Kelly Graves, head coach of the University of Oregon women’s basketball team, said that the world lost a great voice for women’s athletics. Similarly, WNBA star Rebecca Lobo said that no NBA player supported the WNBA or women’s college basketball more than Bryant. He also continuously reminded the world that he did not need a son to carry on his basketball legacy.

“My friends say, ‘It takes a real man to make a boy.’ I [say], ‘It takes a king to make a princess. Get in line,’” Bryant said during an interview with Insider.

While Bryant and Gigi’s death was an extremely tragic moment for sports fans worldwide, it subsequently brought them together.

“It’s the one thing you can control,” Bryant said. “You are responsible for how people remember you—or don’t. So don’t take it lightly.”