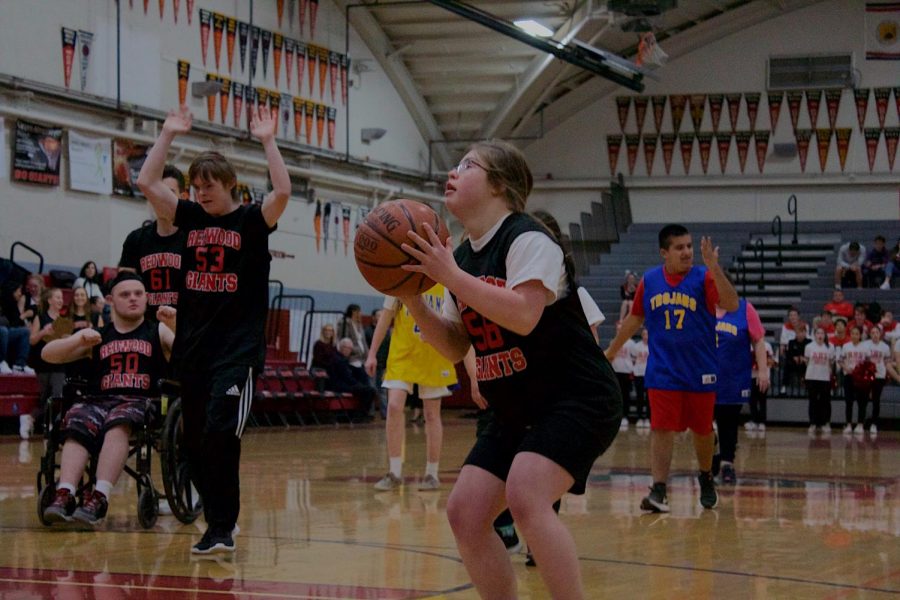 “It’s about playing together: competing, practicing and working together as a team. We’re all trying to be unified and make memories and friendships through sports. It’s not about winning, it’s not about losing, it’s about the experience and what happens on the court,” Katie Peter, Redwood Special Day Classroom (SDC) teacher and supervisor of the Special Olympics Unified Basketball team, said.

This year, alongside Tamalpais, Drake, San Marin, San Rafael High Schools, as well as College of Marin’s Grant Grover team, Redwood’s special education students participated in their sixth annual Special Olympics tournament from Jan. 16 to Jan. 31. The co-ed Unified Basketball team, which operates under the Redwood Special Olympics club, is an all-inclusive program dedicated to providing special education students the opportunity to pursue sports that are normally unavailable to them.

With practices every Wednesday at lunch, the club works diligently to strengthen their team chemistry and athletic ability. In hopes of further integrating SDC (room 175) into the Redwood community, the club also welcomes Redwood student volunteers to assist in their operations.

After joining her freshman year, Katherine Ritter, sophomore treasurer of the Special Olympics club, was stunned by the immediate sense of community and support from the students and teachers involved.

“It’s a really good community for kids to just be kids. It’s also so rewarding to see kids grow each practice. There’s nothing better than seeing a kid throw a ball into the hoop and the excitement on their face after,” Ritter said.

As president of the Special Olympics club, sophomore Liv Holscher also enjoys the opportunity to bond with students who are usually isolated from Redwood events and activities.

“[The students] are always so happy and care so much. When I see them, they always ask how school is and how my tests went. They know so many things about you and give so much support. One of them even came to one of my sports games,” Holscher said. “We all love each other because we spend so much time together. They’re all some of my best friends.”

As president, Holscher is in charge of managing games, designing team apparel and contacting other schools to generate more participation. One of her goals is to collaborate with private schools such as Branson in hopes of expanding the Special Olympic program beyond the public school system.

With five sophomore and four freshmen volunteers, the team hopes to continue expanding its influence throughout the Redwood community. Aside from basketball, the team also competes in track meets and bowling tournaments.

Despite its current popularity, Peter found the process of creating the program difficult and believes that without the tremendous help of Athletic Director Jessica Piesch, the team may not have been able to develop successfully. Peter commends the work Piesch has done for the program, as it fosters both integration and athletic opportunity for all.

“Acceptance, social inclusion and breaking the boundaries of what we set in our minds of what high school athletes should look like and how competitive it should be is really the most important part of it all,” Peter said.

With a tremendous spike in participation this basketball season, Peter is hopeful Redwood students will continue to show their support for both the Unified Sports teams and the special education program.

The Unified Basketball team is always looking for more volunteers and participants for both their Wednesday lunch practices and future tournaments this spring.