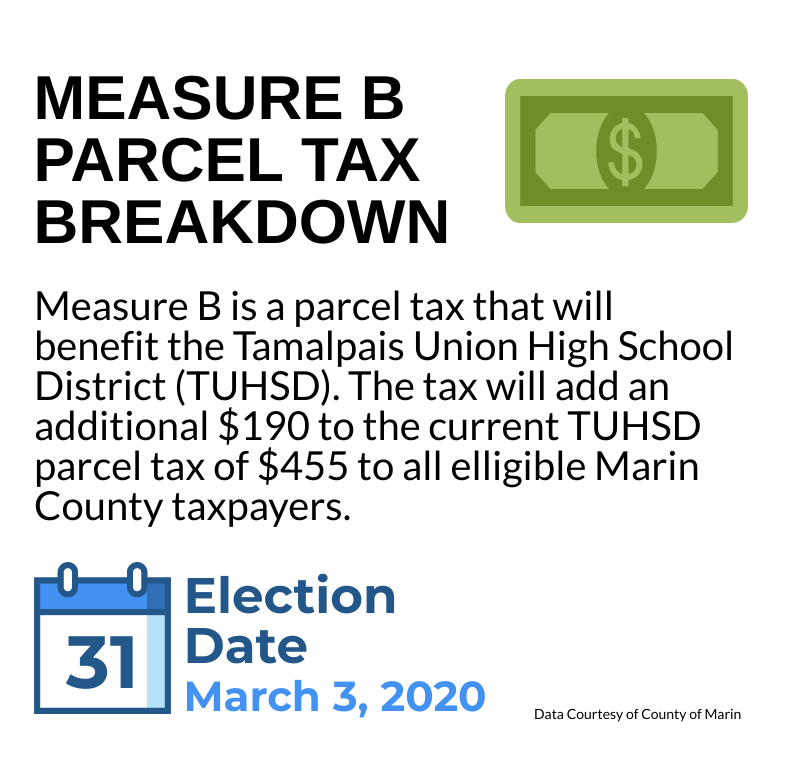 On March 3, 2020, Marin County will vote on Measure B, a parcel tax for the Tamalpais Union High School District (TUHSD). If passed, the tax will add an additional yearly $190 to the current rate of $455 taxed to eligible Marin County citizens that benefits the TUHSD. It will also ensure that the current rate does not expire. While many see this measure as necessary to ensure the success of TUHSD schools, others see it as a burden to citizens who already feel over-taxed.

The measure is outlined on the County of Marin website, where information is available for voters. According to the County of Marin, TUHSD seeks to “maintain [high-quality programs and teaching staff] by adopting a measure renewing funding at the current $455 rate and adding $190 per parcel, providing $23 million annually for ten years….” Eligible taxpayers in this case do not include people 65 and older, although they can still vote on the issue.

According to Measure B chair Jennifer Ginsburg, passing Measure B is essential to ensuring the success of TUHSD schools.

“Measure B is important because it will prevent devastating cuts to the TUHSD. The existing local funding that we have right now provides 17 percent of the district’s budget, and if we don’t pass Measure B and renew this essential funding, we’ll have significant cuts that would begin as soon as next year,” Ginsburg said.

Although the current parcel taxes do not expire until 2022, TUHSD Board President Leslie Harlander says that it is necessary to put the tax on the March 3 ballot in order to reach as many people as possible and have a chance to try again if the measure fails. If the tax does not pass by 2022 and the current parcel tax established by a past Measure B in 2011 and Measure J in 2018 expires as well, the district will lose funding equivalent to the salary of 114 teachers, according to Superintendent Tara Taupier.

Ginsburg understands that not every Marinite has a connection to the school, but she still believes that the tax is beneficial to every county resident.

“Everyone benefits from outstanding public schools, and our excellent local schools attract families. And by investing in our schools and maintaining high quality education, we can protect strong property values,” Ginsburg said.

Mimi Willard, President of Marin Coalition of Sensible Taxpayers (COST) disagrees that the tax will be beneficial for taxpayers. Willard represents a group of Marin County residents who feel the effects of “taxpayer exhaustion,” especially after endorsing Measure J only 16 months ago. According to Willard, the district has not demonstrated a need for the additional funds.

In her claim, Willard pointed to a study done by DecisionInsite that, according to her, found that the current school year is the peak year of enrollment, with enrollment expected to drop by 800 students in the next eight years. According to Harlander and Taupier, however, this information is not accurate; the district hired DecisionInsite in 2016 and again in 2019 and found that peak enrollment is actually next year. Enrollment levels would only drop to the level it was in 2015 by 2029, which is still high enough to warrant an additional parcel tax.

If Measure B does not pass, those in favor will have another chance in November to put a measure on the ballot, which Willard says should be different from the current bill. According to Willard, COST is in favor of a parcel tax that taxes residents based on the square footage of their property, which would prevent cases like the one referenced by Willard below.

“There was a woman who came from Mill Valley to one of the Tam Union board meetings. She lives in a 500 square-foot house and has multiple sclerosis but isn’t low enough [in] income or old enough to qualify for an exemption, and she pays the exact same amount as the Corte Madera mall. It’s a problem; these flat parcel taxes fall on a fraction of what should be the taxpayer base,” Willard said.

According to Harlander, the district was advised not to pursue a square-footage-based tax due to potential legal consequences.

While leaders on both sides of the issue disagree over the specifics of the tax, both agree that it is crucial to contact all kinds of voters in Marin to draw support for their side. Ginsburg says that she and her fellow supporters are trying to reach both ends of the voting spectrum in terms of age.

“It’s important that we reach out to all kinds of voters in our community, not just the parents who have children who are students in the district, but to seniors who live in our community, too. I meant seniors 65 and older, but also seniors [in high school] who are eligible to vote now. This is their future and I hope we all join together to protect it, to protect our schools,” Ginsburg said.

Measure B will be on the March 3 ballot. To view more information on the measure, click here.