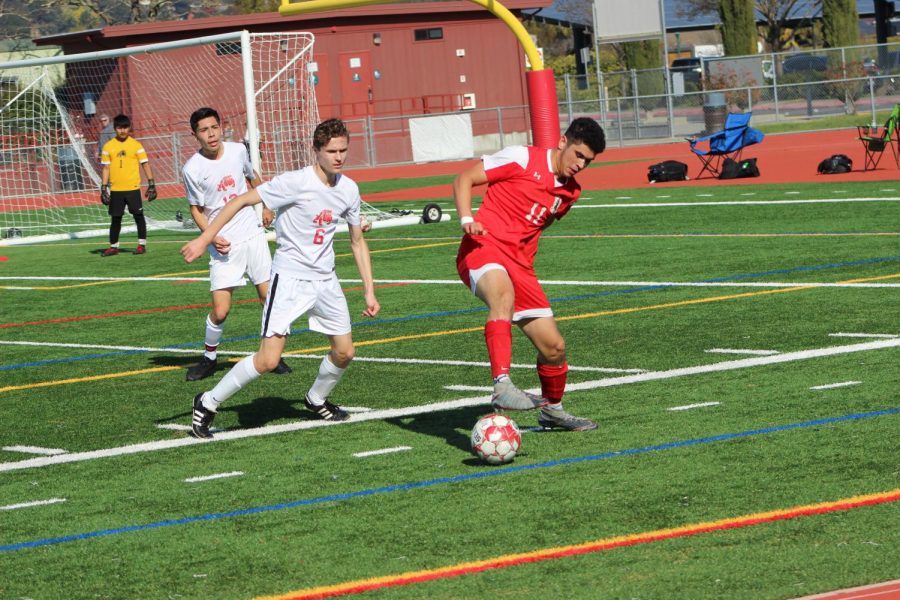 As the Redwood boys’ varsity soccer team took the field on Saturday, spirits were high after watching the girls’ team enjoy their senior day in a dominating win. The boys took advantage of the positive atmosphere, controlling the game and putting constant pressure on San Rafael. The 2-0 win hoisted the team into third place and secured their spot in the Marin County Athletic League (MCAL) playoffs.

Senior Hayden Fargo, whose booming voice could be heard directing Redwood’s stellar defense on Saturday, loved his team’s execution in all aspects of the game.

“Our defense played fantastically and our midfield was incredibly technical. They were able to move the ball around and our forwards got results. As a soccer player there is really nothing more you could ask for from a team,” Fargo said.

The boys’ control of the game was not reflected in the stat sheet until the second half when senior Alexander Nillson scored 10 minutes in. His goal was quickly followed by another courtesy of senior Shawn Clarke.

Clarke, after scoring and increasing their lead to two goals, knew they had to maintain this lead. His mindset changed from scoring, to solely making sure that San Rafael did not counter with a goal.

“When I first scored the goal I saw Billy [Gramajo] and [said], ‘It’s over, we made it to the playoffs. Now let’s maintain them,’” Clarke said.

The boys followed Clarke’s mindset and kept their lead by eliminating all counter-attacks by San Rafael. Led by Fargo, the defense was on lockdown and repeatedly swarmed the San Rafael players, shutting them out for the entire game.

Despite the success, Clarke said there were areas to improve upon. Clarke thought that the midfield and forwards had more to improve on for the playoffs. Senior captain Stanley Gaither expressed similar sentiments.

Gaither and Fargo both thought that with these improvements the team is in perfect shape to take on any team in the league. Now, Gaither believes, if they can make the small improvements, they are a team to be feared in the playoffs.

“In the beginning of the season, we struggled with our chemistry. Now everyone on our team is fully ready for every game and moment. We are able to read our opponents and match the best teams in the league,” Gaither said.

The boys take the field next on Tuesday, Feb. 4 at 3:15 p.m. They will go away to face Marin Catholic to hopefully build off of their win against San Rafael.