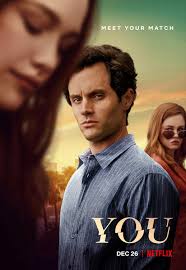 In Sept. 2018, the first season of the Netflix show “You” grabbed the attention of millions of viewers in the first month alone. When the highly anticipated second season was released in Dec. 2019, the ten episodes upheld the reputation of the popular, binge-worthy series for adults and adolescents alike.

This psychological thriller is told from the perspective of Joe Goldberg (Penn Badgley) who is a seemingly likeable and ordinary character with a secret dark side. Season One orbited Goldberg’s advancement into the life of New York writer Guinevere Beck (Elizabeth Lail), a relationship that ended rather abruptly. In the following season, Goldberg quickly assumes the new identity of Will Bettelheim to hide from his vindictive ex-girlfriend, Candace Stone (Ambyr Childers) while she seeks revenge for Goldberg’s damaging overprotectiveness. Stone’s appearance in the new season surprises the viewer, as she was not expected to return. The season also introduces a change from season one’s New York City setting to the hip and creative city of Los Angeles. Traveling to a new city provided an ironic but interesting concept of a clean slate despite Goldberg’s crime-ridden past.

After binging both seasons, the second season stood out because it highlights Los Angeles’s culinary, artistic and social culture throughout Goldberg’s experience in a new environment. As the story progresses, the main character begins to develop a more murderous proclivity, reflecting Michael C. Hall’s role of Dexter Morgan in “Dexter.” Goldberg’s fear of his crimes catching up to him builds suspense and stress and creates a more interesting storyline.

The plot was captivating and, despite having an initially similar structure to season one, it was surprising along the way. The second season held many twists and turns that made it even more exciting than the first, prompting cliff-hanger endings.

Badgley has made it clear in many interviews regarding his performance that his character is supposed to create conflict within the audience. Viewers are meant to have a difficult time distinguishing their feelings for each character, and it is this sense of indecisiveness that makes the series even more intriguing.

The audience relates to Goldberg as a passionate and lovestruck character, but the artificial overabundance and expression of these qualities show his true identity: a psychotic stalker. This makes it hard to take a definitive stance on whether to be horrified or sympathetic while watching Goldberg’s progression of losing control over his emotions.

Although the show cycles through many rather irregular relationships, there is a strong emphasis on the stalking-culture that modern society fosters. Goldberg’s use of non-confrontational stalking through social media demonstrates how much personal information is available on the internet with minimal effort to find it. Because of this unsettling reality, the show correctly reflects today’s world and captures the influence of social media brilliantly.

The second season of “You” received a well deserved 91 percent on Rotten Tomatoes but only a 7.8 out of ten on IMDb ratings. However, the show proved to be unique and captivating in an already competitive genre of crime television. Overall, the show was well-written and included three-dimensional characters, each with their own role to bring out different sides of Goldberg’s personality. Though the stalker dynamic seemed rather basic before the series aired, “You” has continued to stay original and incorporates societal commentary that will hopefully be continued in the unofficially announced third season. This show is a must-watch for anyone who has the stomach for a thriller that distinctively deals with complex characters and interesting topics such as human nature and the expression of emotions.