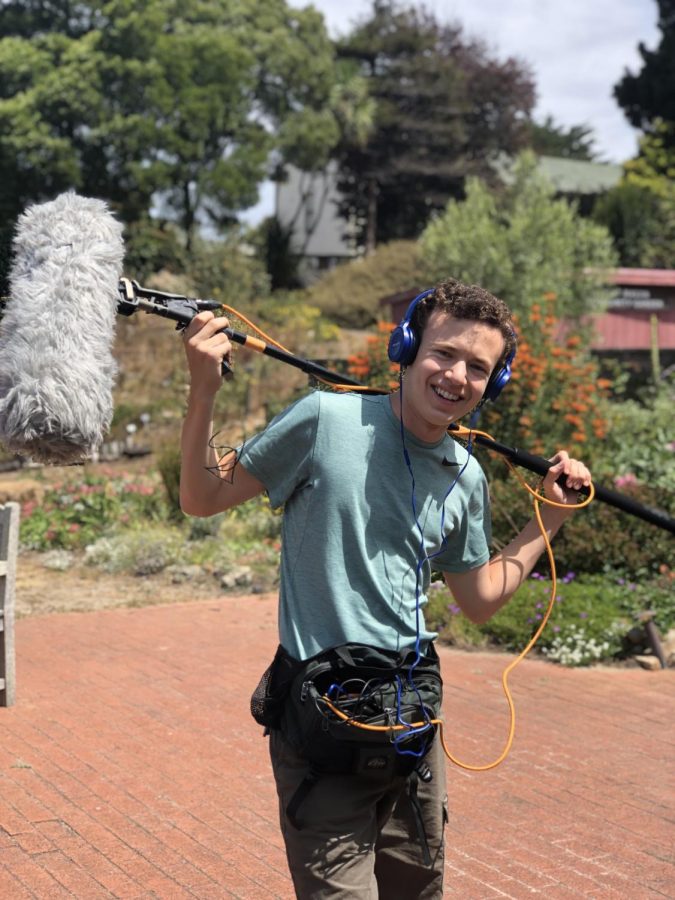 “For me, videography came out of boredom. In third grade, I was on my iPad and there was this app where you could edit videos, and I accidentally matched the music to the video. I was just mesmerized…I guess it progressed from there to get more and more advanced, and my curiosity didn’t stop,” Ian Leifer, junior filmer and executive producer for Redwood TV (RTV), said.

After discovering videography during his eighth grade year-abroad trip to Spain, Leifer was inspired to become more involved and comfortable with film. In Barcelona, Leifer often played soccer with his friend. However, having no previous experience playing soccer, Leifer used his beginner level videography skills to film his friend playing the sport instead, as a way to immerse himself with that aspect of Spanish culture.

“I decided that [my friend and I] would start a YouTube channel. It was kind of silly, but it was fun because he would play soccer and do trick shots, and I would be able to film videos of him. I think that from that experience, I learned how to edit better and how to film,” Leifer said.

Leifer’s involvement in Spain gave him ample opportunity to realize both his natural and potential skills. He began to understand how to integrate aspects of his surroundings to fuel his fascination for filming.

Leifer has since progressed his skills, tackling RTV and a variety of personal projects, focusing on broadening his skills in and out of school to produce a variety of film genres.

“Last year, I filmed a five minute documentary about suicide in the Bay Area and suicide prevention,” Leifer said. “Right now I’m working on my first feature film called ‘Opposite of Bliss.’ I’m working with some college students on it in San Francisco, and we’re making an hour and a half film.”Leifer also mentioned that one reason he loves filming is that it gives him an opportunity to capture events around him, whether that be current issues or sports montages. It also gives him the ability to work closely with others and create a sense of community with his peers.

Due to his fervor for videography, Leifer submitted an application for RTV at the end of his freshman year and was accepted into the program. Junior Bella Sanchez joined RTV at the same time as Leifer and has spent hours working alongside him. With strict deadlines every week, Sanchez applauds Leifer’s ability to persevere through the rigorous work while also finding the time to assist his peers.

“[Leifer] does a lot of the scheduling [which] really helps us stay organized…He does a lot of work and tries to get everything done. During filming, Ian is almost always there,” Sanchez said.

Leifer co-produces RTV with juniors Connor Moon and Miranda Ward along with senior Garrett Cook, who all collectively run the class.

“Being an executive producer means that you are responsible for running and managing Redwood TV and making sure the workflow is efficient while everybody is happy and productive. You also have to make sure everything that comes out on Thursday is at the highest quality that it can possibly be at,” Leifer said.

Ward regularly works with Leifer to ensure every segment is polished and ready to be viewed. She believes he brings a great presence to the class through his dedication to the entire film process.

“[Leifer is] determined, creative, motivated, funny and nice…. He’s been to almost every single shoot that we’ve ever done. He does a lot of work [for RTV],” Ward said.

In the future, Leifer hopes to continue filming projects for RTV while also improving his videography skills with the hope of eventually producing more of his own films.

“I just want to get better and keep on finding ways to use a camera to tell stories,” Leifer said. “I’m very honored that I have this position and that I’ve been able to continue doing something that I’ve loved to do my entire life.”