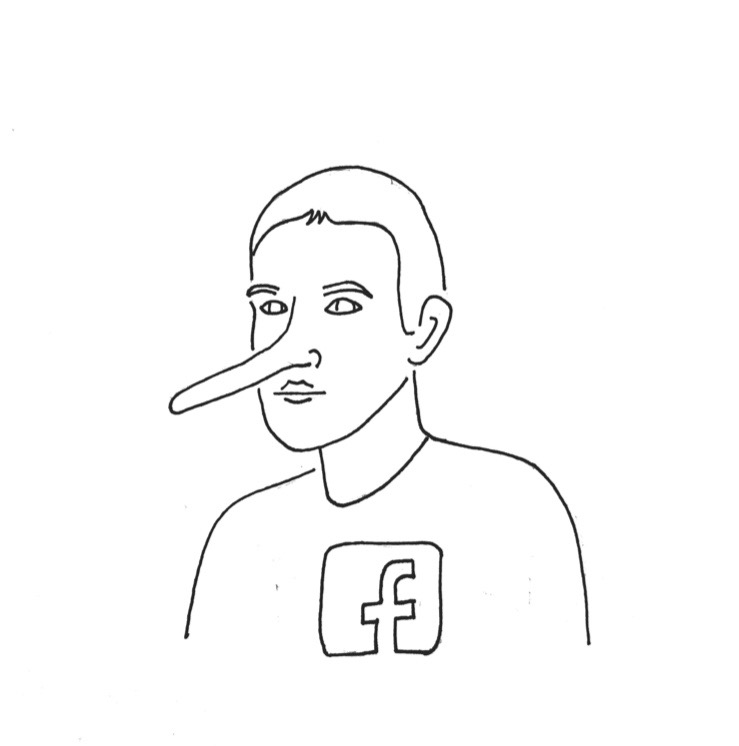 Facebook, the pioneer of modern social media, is known by almost every person today. The platform is used daily to share photos, videos, article headlines and more with a vast network of friends and family, but its 2.37 billion users are unknowingly viewing a number of lies almost every time they tap the little blue Facebook icon.

Facebook welcomes these false claims with open arms, encouraging their growth through fabricated political advertisements. According to Vox, during the Ukraine scandal between Trump and the Bidens, the Trump Campaign released a video ad on Facebook falsely accusing Joe Biden for bribing the Ukraine with money in order to fire an investigator. The ad had already accumulated millions of views when the Biden campaign asked Facebook to take it down, to which Facebook refused.

Mark Zuckerberg, CEO of Facebook, stands by his refusal to ban ads of this nature from the platform, citing freedom of speech. The old policy, or lack thereof, enforced minimal restrictions on what could be published, but in January, Zuckerberg revised Facebook’s advertising policy, giving users more control over how many ads they see rather than eliminating them altogether. According to an NPR Morning Edition Podcast, the update will authorize additional specifications for the types of ads users receive. For example, users could change their settings to eliminate all Democratic ads, leaving only Republican banter, or vice versa. However, even with a selective filter over the ads, users are still exposed to lies. This policy simply does not address the problem.

Almost every known news platform runs an account on Facebook, as well as Instagram, which is owned by Facebook and Twitter, one of the company’s top competitors. They use the apps to post major headlines, breaking news and additional visuals for stories. These social media platforms have become a primary place for users to obtain daily updates in the news. According to a study conducted by the Pew Research Center, roughly two-thirds of Americans are Facebook users and among this population, just under half get their news directly from Facebook.

According to a Bark survey conducted in January 2020, 72 percent of students self-reported that they obtain their news updates from social media platforms, demonstrating how reliant younger generations are on social media platforms for their news. Yet, Facebook still allows its users to feed on misleading information. The most frightening part is that the majority of users do not even realize the fallacies within the news the receive.

Despite Zuckerberg’s satisfaction, this epidemic of misconceptions has received backlash from many. Twitter, in contrast, was quick to announce plans for a new policy, which came into effect on Nov. 22. The change will ban promotion of false political ads from any political figure.

Many Facebook employees also share their dislike toward the policy. A letter written and signed by about 100 Facebook employees exposed the lack of support within the company for Zuckerberg’s policies. The letter reads, “We’re reaching out to you, the leaders of this company, because we’re worried we’re on track to undo the great strides our product teams have made in integrity over the last two years. We work here because we care, because we know that even our smallest choices impact communities at an astounding scale. We want to raise our concerns before it’s too late.”

In response, Zuckerberg claims his refusal for the policy stems from not wanting to infringe on First Amendment rights or prevent people from expressing themselves.

Yes, people should be able to speak freely, but they also deserve access to truthful information. The 2020 presidential election is right around the corner and too many fabricated political ads are being mistaken for truthful ones. Historically, falsehoods such as these have been categorized as propaganda; yet this term has barely resurfaced since Facebook’s refusal to ban. Campaigns of the presidential electives are doing the same to gain support, much like Trump did in the Ukraine ad, with the ultimate goal being to change who people vote for. This could leave us with an unfit president who is too acquainted with openly lying.

Consistent exposure to these conspicuous ads reinforces the message to the point where it becomes impossible to recognize the lies embedded within. Until Facebook resolves its current policy and bans the spread of false information, users will continue to devour fallacies until eventually, no one will know the difference between a truth and a lie, and the United States will be left with a deceiving president, ready to take advantage of an uninformed country.