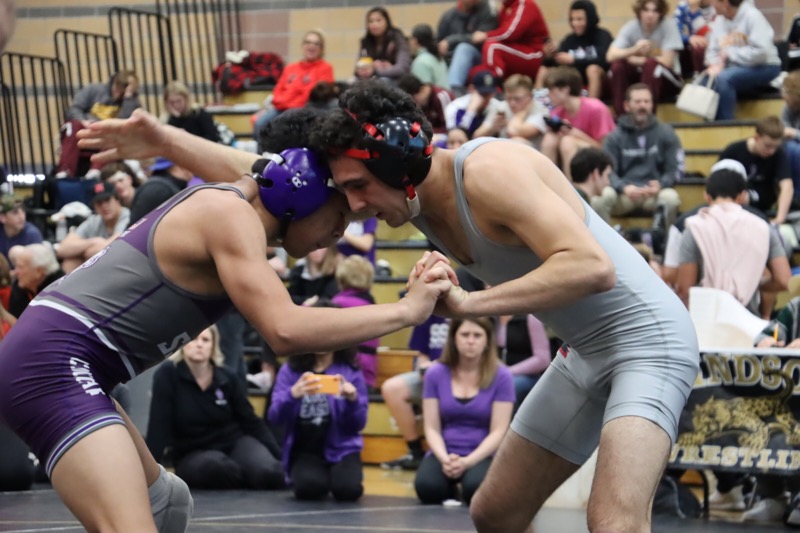 When senior captain of the boys’ varsity wrestling team Jaden Ramos walks onto the mat he is instantly filled with determination and focus. For the next six minutes, his only thought is how to take down his opponent with the skills he has acquired throughout his past four years at Redwood.

Last year, Ramos finished an impressive fourth place in the North Coast Section (NCS) and is currently holding first place in NCS, as well as nineteenth place in the state of California.

Wrestling has been an instrumental part of Ramos’s life ever since he began the sport at the start of his freshman year. Inspired by his previous interest in Jiu-Jitsu and encouraged by his father, Ramos decided to take up another combat sport: wrestling.

“For six years, before my freshman year, I did Jiu-Jitsu. I just fell in love with a fighting sport and one-to-one combat,” Ramos said.

Once Ramos began wrestling he realized the two sports were completely different. Jiu-Jitsu is relatively independent, while wrestling involves a strong team spirit, which Ramos enjoys.

“[Wrestling] was more than I expected because Jiu-Jitsu is [on] more of a [day to day] basis and you go to your own competitions whenever you want to. But with wrestling, it’s completely different. You go to practice every day, it’s a high school sport and you have to compete every week. That was a big shock for me, but I got used to it, and I just fell in love with it,” Ramos said.

Ramos credits a lot of his success to his coaching staff. Head coach Lochlan McHale has been coaching wrestling for the past four years at Redwood and has had a massive impact on Ramos.

“We are really lucky to have some of the best coaches,” Ramos said. “[McHale] has been an amazing coach. Everything is planned meticulously [and] he is very on point with the schedule. He never misses anything [and] if he says he is going to do something he does it, so I am very lucky to have that level of organization.”

McHale, on the other hand, admires Ramos’ dedication to the sport. McHale feels that Ramos plays a significant role on the team, especially when it comes to mentoring and inspiring the younger wrestlers.

“[Ramos] definitely acts as a role model on the team and also during the off-season. Once the season ends, our doors open up and we have workshops, guest coaches, all sorts of stuff and it is open to any wrestler,” McHale said. “We have kids all the way from six years old to [Ramos’] peers coming in. [Ramos] is always one of the first ones to jump in and help one of them.”

Fellow varsity wrestler junior Ben Olsan has been teammates with Ramos for three years and views him as a role model and mentor.

“Off the mat, [Jaden] is a really fun guy. He is goofy and extroverted. On the mat he is a completely different person. He is really focused and determined,” Olsan said.

According to Olsan, many of the younger wrestlers on the team also admire Ramos’ skills and attitude.

“[Ramos] is someone I look up to and a lot of the younger wrestlers do too. He is someone that a lot of the freshmen try to practice with because he is just at another level,’’ Olsan said. “He is very professional [and consistent] at everything he does, and he is able to go out there and compete every weekend.”

Ramos’s future after high school will continue to involve the sport of wrestling but beyond competing on the mat. Ramos hopes he can help coach and spread his knowledge of the sport to support younger wrestlers.

“I might try to help by coaching kids,” Ramos said. “I am planning to give back to the team. I definitely want to visit the team after this year and just see how they are doing.”