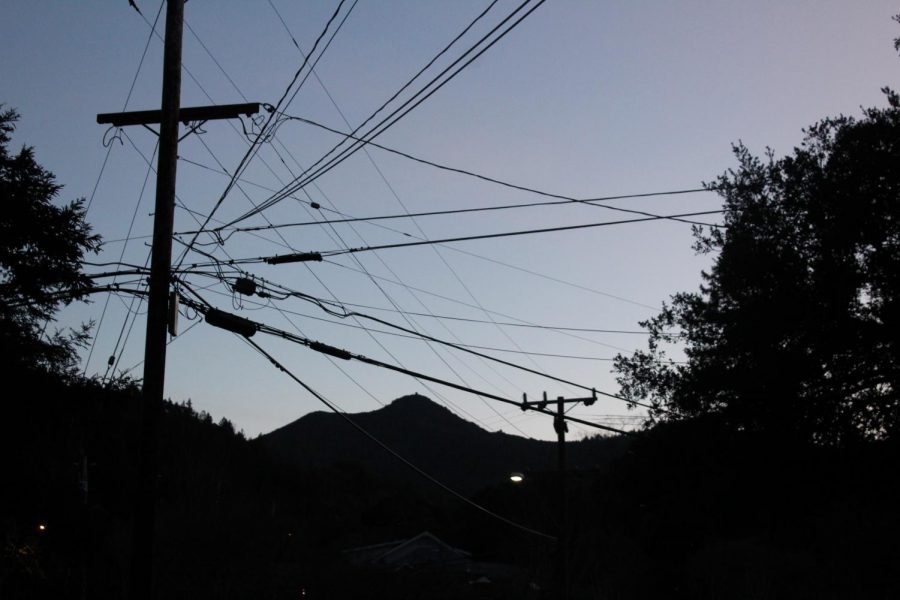 Many of the Ross residents are pushing underground utilities for aesthetic purposes, including an unrestricted view of Mt. Baldy.

In recent years, fires caused by downed power lines have ravaged California and the photos of burned wastelands and stark skylines are widespread. After being exposed to these stories, many people consider improvements they can make in their own communities to prevent such tragedies from occurring where they live.

In Ross, Calif., there has been an ongoing push headed by residents for the undergrounding of all power lines on the roads of Glenwood, Lagunitas, Fernhill and Norwood. As of Nov. 19, 2019, 78 residents out of 112 households in these districts have signed petitions supporting this proposed plan. The petitions require only 65 percent of residents to sign, but the predicted final percentage is over 70 percent.

The driving factors in the Undergrounding Policy are increased safety for residents, unrestricted views of the scenery and higher property values.

Lisa Williams, a Ross resident for over two decades, is in support of the Undergrounding Policy and says that she signed the petition mainly for safety as well as for the protection of the trees in Ross.

“We’ve lived here 23 years and moved to Ross because we love the trees in the town. We’ve seen how the trees have been cut because of PG&E and are concerned that that the trees are just going to get more destroyed,” Williams said.

Similar to Williams, Stephanie DiMarco, who pioneered the campaign with her neighbor Kris Kelley, is also motivated by the natural beauty of Ross.

DiMarco was first inspired to push for underground utilities after a power surge from another street sparked a fire across the street from her house. Luckily, the fire occurred in the middle of the day, so a neighbor was able to put it out before it spread. Still, DiMarco recognizes that the damage could have been more severe under different conditions.

“If it had been windy and in the middle of the night, you could have seen the whole town go up in flames, just like it did in some of the towns north of us,” DiMarco said.

However, this plan is a multifaceted issue, as the undergrounding

of power lines is expected to cost $20,000 for small properties and up to $150,000 for larger ones, not including the additional costs of attaching the power lines to the houses themselves. Ross residents are expected to pay for the undergrounding themselves, even those who are not in favor of the policy. While residents can pay off these costs over a 20 to 30 year period, the high prices can make it difficult for less wealthy homeowners to be onboard.

Julie McMillan, a Ross Town Council member, thinks that while this could become a polarizing issue, the council is doing everything in their power to not exclude lower-income voters.

“There is concern about this issue and if it’s about the haves and the have-nots. And that could polarize the community. We want to improve the community and we need to do it in a fair way so that people feel like it’s a community and not just a certain group of people kind of railroading it for everyone else,” McMillan said.

Although McMillan supports the policy, she recognizes that the process will be long and complicated, especially due to PG&E prioritizing escaping bankruptcy and prevention rather than the process of undergrounding utilities.

Additionally, there has been a vocal minority who are taking a stand against the proposal. Ken Fineman, a Ross resident, has written four letters, totaling 32 pages, to the Ross Town Council regarding the Underground Policy. Fineman is particularly opposed to Resolution No. 2112, which chartered the Town Policy for the construction of Underground Utility Districts, paid for by homeowners. Although Fineman is not against the concept of the Underground Policy, he is concerned about the process for residents and implores that information be provided to residents within the district in a timely manner.

“Seeking a way to achieve underground utilities is an admirable objective for Ross (improved aesthetics, fire minimization, fewer utility outages, etc.), but Resolution No. 2112, as currently drafted, is a nightmare. I don’t think Ross has an Elm Street, but if it did, I would call Resolution No. 2112 ‘A Nightmare on Elm Street,’” Fineman wrote in a letter sent to the Council on Aug. 6, 2019.

Despite the issues with the push for underground utilities, DiMarco believes that the Undergrounding Policy will ultimately improve the community.

“I would just encourage [those against underground power lines] to think about their property values and the safety of the community. And it really is the fact that there’s such momentum and so many neighbors who want it. It really behooves us to bite the bullet and get it done,” DiMarco said.