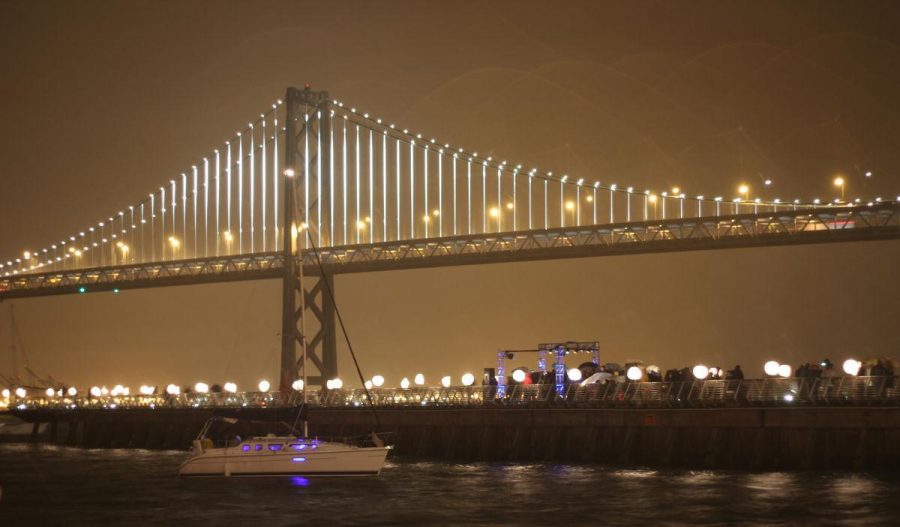 Boats float in front of the Bay lights lighting ceremony.

On March 5, a couple hundred people braved the cold rain to gather on the Embarcadero’s public Pier 2 and witness the lighting of the Bay Lights, a project that has been in construction for over two years.

As the Mayor of San Francisco, Ed Lee, counted down from five, spectators looked up anxiously at the Bay Bridge, waiting to see the cables of the Bay Bridge light up.  When he reached zero, the lights didn’t go on.

The crowd paused, but then gasped seconds later as each individual cable was brilliantly lit up with LED lights.

The Bay Lights is the world’s largest LED sculpture and is eight times the scale of the Eiffel Tower’s 100th Anniversary lighting, according to a press release for the event.

The idea to place an art installation on the Bay Bridge originated with Ben Davis, who founded the branding agencies Words Pictures Ideas and Illuminate the Arts, the second of which is a San Francisco-based organization dedicated to the creation of public art.

Tami Kelly, who is the press contact for Bay Lights, said that while it was Davis’s idea to create an art installation on the Bridge, it was the artist, Leo Villareal, who came up with the idea of a light installation.

Leo Villareal is a world-renowned artist in the field of computer driven art and LED’s.

Davis wanted to place an art installation on the bridge to “help bring attention to the bay bridge,” according to Kelly.  Kelly said that Bay Bridge lives in the shadow of the Golden Gate, and Davis wanted to bring it to the forefront.

It will cost $11,000 per year to run and the energy usage will be offset by solar panels installed by CleanPath in Davis. The panels will stay there permanently, even after the installation is taken down.

The lights are not visible while on the bridge, but are viewable from San Francisco and points further north along the coast.

The lights will be on from dusk until 2 a.m. on the Bay Bridge.