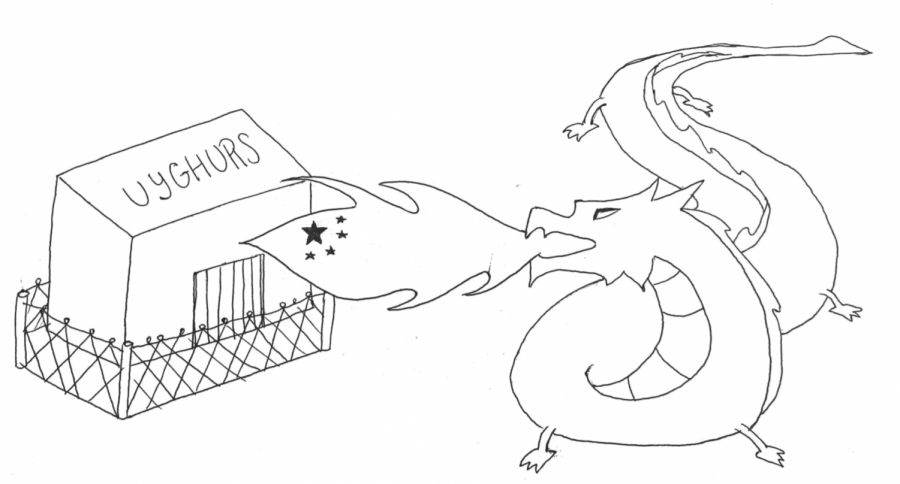 As we studied the Holocaust in European History my sophomore year, I remember asking my teacher, “Do you think that something so terrible could ever happen again, even after witnessing such an inhumane event?” I think I knew the answer already. Time and time again humans have proven that history repeats itself, but I wanted to believe that we’ve progressed past such cruelty. We’ve studied the ethnic cleansing of indigenous people that occurred within our own country’s borders. My generation in particular wasn’t alive during the Armenian, Cambodian, Rwandan or other genocides but we are bearing witness to another example of cultural erasure occurring today within China.

The Uighur people are Chinese Muslims living in the Xinjiang region of Western China. They became independent for a short period of time during the early 20th century, but the region returned to communist Chinese rule in 1949. Since then, the Uighur people have progressively lost rights to express their cultural, religious and economic identity through an assortment of government policies––practices that follow a similar pattern to those enforced by the Third Reich during the Holocaust. What is especially haunting are the “re-education” camps within Xinjiang, which are eerily similar to the concentration camps in Nazi Germany and gulags in the Soviet Union under Stalin’s rule.

As I write this, these camps hold from one million to three million Uighurs, according to Randall Schriver, the Assistant Secretary of Defense for Asian and Pacific Security Affairs at the U.S. Defense Department. The “education” occurring within the camps’ borders, as stated by Bahram Sintash of the Washington Post and Uighur Human Rights Project, “is aimed at eliminating Uighur ethnocultural identity and assimilating them into an undifferentiated ‘Chinese’ identity.”

According to Emily Feng of National Public Radio (NPR), “Former detainees say that while in detention they were forced to memorize Chinese communist propaganda and learn Mandarin and were occasionally violently interrogated or beaten.” And yet, in the midst of China’s oppressive, abusive authoritarian system, our country concerns itself with tariffs and trade wars. Instead of hearing about steel and aluminum in the news everyday, there should be discussion about the Xinjiang conflict. The Chinese government should be held accountable for their actions and identified as an authoritarian regime that is inflicting immense emotional, physical and cultural pain on the Uighur people.

Any form of dissent from traditional Chinese beliefs as insignificant as watching videos related to Islam or searching Islamic scriptures on the internet can bring Chinese officials to one’s door within the Xinijang region. But this isn’t the worst of it. Home isn’t home anymore to these families, not with the government workers required to infiltrate their houses and enforce Chinese customs. According to AP News, 1.1 million of these government workers have been sent to Uighur households, acting as spies to maintain Han Chinese cultural authority. They attend family dinners, weddings, funerals and other private gatherings to ensure that traditional Uighur practices are not acted upon.

This is a prime example of cultural genocide, and while the U.S. government’s actions have been lacking, it’s unfair to say that they haven’t attempted to address the issue at all. According to the U.S. Department of State, Secretary of State Mike Pompeo has inflicted visa restrictions on Chinese officials involved in the Uighur internment. The U.S. Commerce Department, too, has blacklisted 28 companies due to their use of forced labor via the detention camps. The Congressional-Executive Commission on China (CECC) even held a hearing called “Forced Labor, Mass Internment, and Social Control in Xinjiang” on Oct. 17, where four activists and experts testified regarding the Xinjiang human rights violations.

The Chinese government’s intentions are abundantly clear, and the U.S. must make theirs apparent as well. Life, liberty and the pursuit of happiness does not just apply to those within our country’s borders. And with the distinct connection between Chinese leadership and the oppression of Uighurs in the Xinjiang region displayed by The New York Times’ leaked “Xinjiang Papers,” President Donald Trump himself and his administration must address this human rights issue further. The American people, too, must advocate for the Uighurs.

For a country that defines itself by freedom and prosperity, how can we stand by while millions of individuals are being watched, imprisoned without reason and living in a nightmare-inducing dystopia? Without proper attention from the press and acknowledgement from the U.S. government, how can Americans be informed? We need constant coverage and investigation. We need expansive campaigns displaying the circumstances within Xinjiang and further sanctions placed on the Chinese government. And while it may be controversial, pulling out of the 2022 Beijing Olympics may be necessary as well as a form of protest. Only through action and action alone can our country speak for the Uighurs who have been silenced.