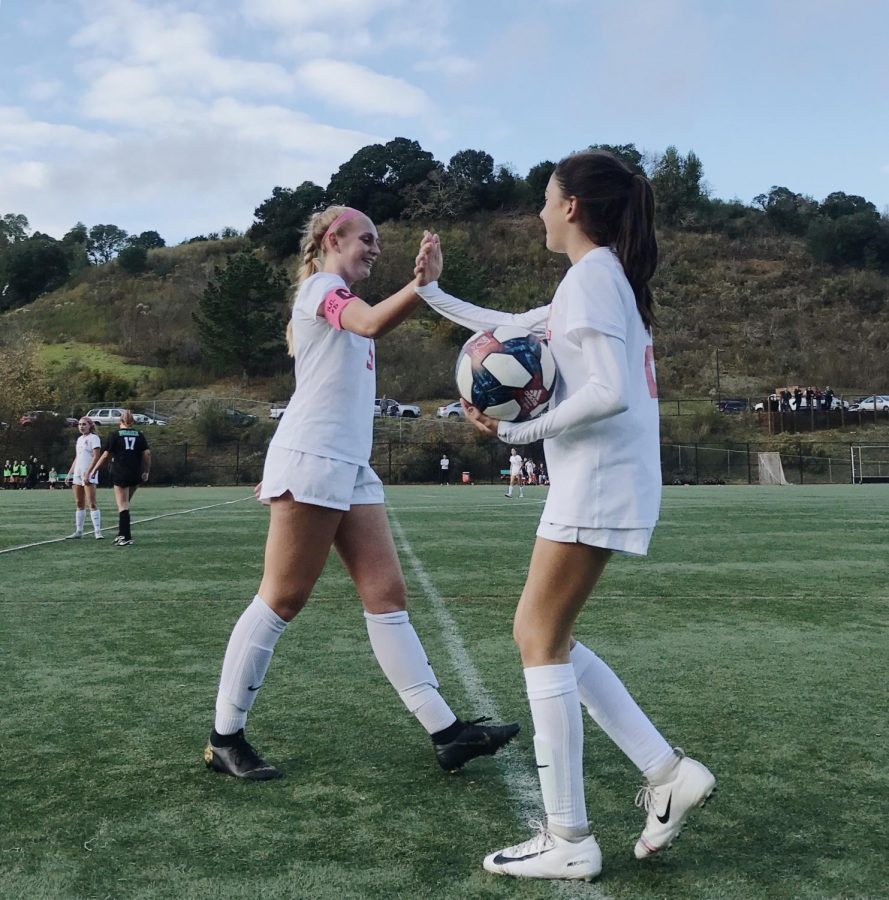 After suffering their first loss of the season against Tamalpais High School last Tuesday, the girls’ varsity soccer team came back firing with a 3-0 win against Drake on Saturday to improve their record to 2-1-1. First year varsity coach Lucas Marroquin has implemented some key changes to boost the team’s performance.

Senior midfielder Hana Lefferts believes the team will only continue to improve as they grow more comfortable with Marroquin’s style of play.

“We’re just implementing a lot of changes with the new coaches and trying to build out of the back a lot more,” Lefferts said. “I’m excited about the rest of the season. I think that we have had a rougher start than we intended to, but that’s nothing to be worried about going forward.”

Returning varsity sophomore Riley Anderson, a standout in the game according to Marroquin, believes their success was due to the team leadership this season. Led by senior captains Grace Bouton, a UC Santa Barbara commit, and Sophia Curtaz, a Chico State commit, the team is closer than ever in terms of chemistry.

According to Lefferts, the decisive win can also be attributed to junior Shannon Watridge: one of the MCAL players of the week.

“[Watridge] played great. She had two goals and she held it down for us in the midfield. Her main role is on the wing, but it was good to have her in the middle because she’s really technical,” Lefferts said.

Another key player in the game was junior goalkeeper Camille Karner in her varsity debut.

“[Karner] had a good second half. That was her first varsity appearance so she really stepped up,” Marroquin said.

Karner’s main priority was to sustain the shutout sophomore goalkeeper Mia Hammant established in the first half.

“I was really nervous because we hadn’t gotten a shutout yet, so I wanted to help get our first shutout. Drake’s a pretty strong team, but I didn’t want to get scored against,” Karner said.

After losing last year in the Marin County Athletic League finals to rival Branson, the team is shooting for the pennant come February.

“We set a lot of goals at the beginning of the season to hold ourselves to simple things such as trying to score in the first 20 minutes,” Lefferts said. “Overall, I think that just lends to our bigger goal to win because last year we lost in the finals, which was really tough. Also this year is just another year to aim for that championship.”

The team looks to carry this momentum into their next game on Friday, Dec. 20, against Westview High School in the Tri-Valley Classic.