Editorial: PG&E’s mismanagement has managed to set California on fire 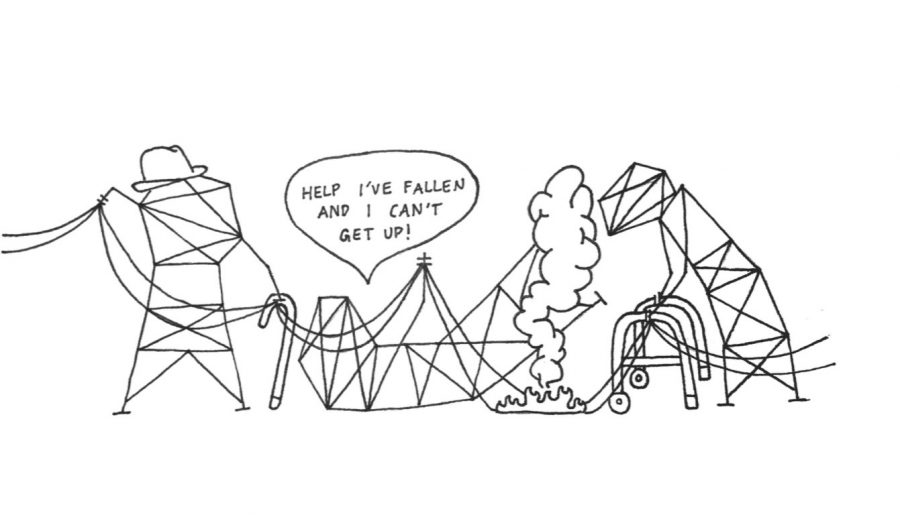 We all anticipated the alerts on our phones––in the wake of the fires ravaging California, Pacific Gas and Electric Company (PG&E) shut off electricity to prevent further damage. Families across California scrambled to pack their belongings and evacuate as the fires closed in. Meanwhile, firefighters tenaciously fought the Kincade and Getty fires as tens of thousands of acres went up in flames. These fires have been attributed to the mismanagement of PG&E power lines, causing nearly 180,000 people in Sonoma County alone to evacuate.

In recent years due to climate change and strong wind patterns, wildfires have more frequently pervaded California. According to The Los Angeles Times, “Pacific Gas & Electric has admitted in federal court that its equipment probably caused ten wildfires this year in Northern and Central California.” The company filed for bankruptcy and has been bailed out by the California State Legislature twice in the past two years. PG&E’s budgeting and faulty prioritization is still causing devastating fires with power being turned off for millions in the meantime. As the main provider of electricity to Californians, PG&E has a responsibility to protect the safety of those whom they are servicing. To do this, PG&E must focus less on appeasing shareholders and more on the quality of their service through its management of utility restoration.

The Camp Fire in 2018 was directly caused by faulty company equipment that sparked the most destructive wildfire in California history, scorching over 150,000 acres of land prior to containment. While there is no clear connection between the PG&E power lines and the Kincade fire yet, there is a potential link to the lack of management. In fact, a broken transmission wire was found on Oct. 24, 2019 on a PG&E tower near the Kincade Fire’s origin, according to PG&E’s website.

Following the fires in 2018, the electric company cut costs on equipment and power line management after filing for bankruptcy. Reducing spending was a short-term solution at best, a ploy to retain funding and keep investors satisfied.

The motives behind this maneuver are questionable but not surprising: PG&E has a history of favoring shareholders over customers and prioritizing their success as a corporation over the safety of their equipment. According to CBS News, PG&E spent $5 billion on shareholder dividends reported on July10th of this year. By retaining the little funding they have, PG&E has caused hundreds of small fires and their outdated electrical utilities have caused billions of dollars to be lost. To prevent the fire from spreading further than the affected areas, PG&E cut off power on Oct. 26 in counties ranging from Napa to Marin, even hitting Santa Cruz County.

Besides inconveniencing millions of people throughout the state, PG&E has also negatively impacted the economic landscape of the community. According to Michael Wara of the StanfordWoods Institute for the Environment, up to $2.5 billion in economic activity from Northern and Central California could be lost because of the most recent power outages. The economy suffers in a power outage due to downtime in local businesses, which prevents employment and production. Additionally, the longer stores and restaurants remain closed, the larger the potential loss in revenue from customers. This simple relationship is a large factor of the economic loss during power outages. Damaged inventory (especially in supermarkets), hard drive data loss and lost opportunity are added to the costs businesses have to pay as a result of the blackout, which further distresses the economy.

PG&E’s organized blackouts are expected to become the new norm as fire season continues to worsen annually. Due to the company’s lack of initiative, Californians are being forced to adapt. In order to stay prepared, families and individuals should plan in advance for potential power outages and fires. Additionally, community members should hold PG&E accountable by reporting downed power lines.

It is essential to address PG&E’s problems early in the process before they create more devastation than they already have. PG&E had several opportunities in the past to improve and replace their outdated power lines, but it is now almost too late for the company to act due to the financial crisis they are facing from the damage they caused in some of the most infamous fires in recent California history.

In order to mitigate the pattern of electrical mismanagement, PG&E must be held accountable for their actions. The fire situation has progressed to the point where individuals lose their lives and countless homes burn to ashes annually, devastating communities throughout the state. Although currently bankrupt, PG&E must allot a larger amount of money towards the upkeep and modernization of power lines rather than cut management costs. While this may appear as a difficult task in the short-run due to the company’s bankruptcy, even through deficit spending, improving the power line quality and having steady maintenance is an important investment for the future safety of Californians. If PG&E neglects their duties in lieu of maintaining business success and investment, they will continue to endanger California and exacerbate the severe fire season, making it an annual event.