Debriefing the past decade: Looking back at the teenage years 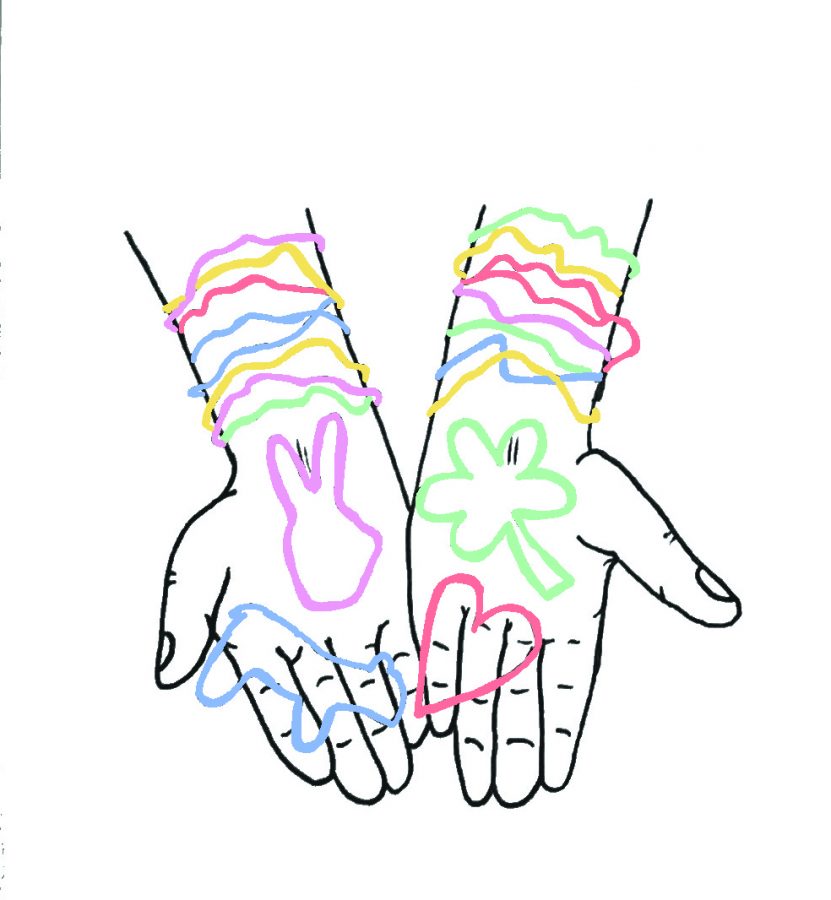 As 2019 comes to a close, so does the 20-“teens” decade that we students at Redwood did in fact experience as teens. These years brought an exhilarating string of events, and while reminiscing as the finish line swarms ever-quickly into view, the bittersweet ending brings both sorrow for what is to be left behind and anticipation for what is to come. Here are some of the highlights from the “teens” decade, categorized based on the best fads, songs, movies, dance trends, television shows, social media challenges, major news events, technology releases, albums and food trends.

In 2010, Silly Bandz could be found on the wrists of every elementary school student. Made of silicone and shaped like

objects from animals to princesses, these colorful rubber bands were created by Rob Croak, who predicted their marketability based on people’s frequent hand fidgeting. The fun of collecting the bracelets skyrocketed their popularity, and the variety of colors and shapes made them perfect to trade with friends. Following their sudden popularity, some schools banned Silly Bandz, claiming they were a distraction to students.

In 2011, Adele’s “Rolling in the Deep” won the Grammy Award for Song of the Year, captivating listeners internationally with its soulful vocals and memorable melody. Her powerful message of recovering after a heartbreak deeply resonated with a broad audience. Once “Rolling in the Deep” hit No. 1 on Billboard’s Hot 100 chart, it stayed there for seven weeks and became the best-selling digital song by a woman in the United States at the time. The heavy lyrics accentuated by the strong instrumentals developed a national craving for the song’s irresistibly catchy chorus.

In 2012, “Gangnam Style” became an internet sensation. Created by the South Korean artist Psy, the song was written as a satirical critique of South Korea’s class and wealth. In the music video, Psy repeatedly does the “Gangnam Style” dance, a combination of stepping to the music with his feet while alternating between the motion of riding a horse and lassoing. The entertaining dance was easy to learn and fun to perform, and it quickly blew up globally with people frequently mimicking the humorous motions both in public and on social media.

In 2013, “Parks and Recreation” won the Television Critics Association Award for Outstanding Achievement in Comedy following four consecutive nominations in the category. The beloved show stars Amy Poehler as Leslie Knope, a bureaucrat in the Parks Department of Pawnee, Indiana. The diverse personalities of the characters, as well as the earnest endeavors undertaken by Knope, made for a lighthearted comedy perfect for lifting spirits, and the show continues to be a household favorite to this day.

In 2014, the Ice Bucket Challenge, a campaign to raise awareness for Amyotrophic Lateral Sclerosis (ALS), quite literally poured into social media platforms. In this challenge, a video is taken while a bucket of ice or ice-cold water is dumped onto an individual’s head, after which the individual nominates a minimum of three people to do the challenge in the next 24 hours and donate to the ALS Association. Part of the appeal and immense popularity of this social media challenge was the sheer entertainment garnered from watching the videos. Besides being an amusing activity for friends to participate in, the challenge motivated an estimated 2.5 million people in the U.S. to participate, raising over $115 million for the cause.

In 2015, on June 26, the U.S. Supreme Court legalized same-sex marriage in all 50 states as a result of Obergefell v. Hodges. Celebrations nationwide ensued as a result, and the hashtag #LoveWins was the number-one trending hashtag on Twitter, reaching 6.2 million Tweets in six hours.

In 2016, Apple released AirPods, which received considerable mockery at the start, as well as complaints of the AirPods constantly falling out. However, opinions were mixed due to the lack of wires’ convenience factor. Despite the differing reviews, their humorous status symbol and appearance in countless memes led them to soar in popularity.

In 2017, Bruno Mars won the Grammy Award for Album of the Year for his album “24K Magic.” From the upbeat rhythms to the catchy melodies to the clever lyrics, Mars managed to establish a sense of modern timelessness while appealing to a broad audience.

In 2018, “Green Book” won the Academy Award for Best Picture. Through dry humor and

shocking reality, two men on a concert tour in the Deep South develop an unlikely friendship while facing the perils of racism in the 1960s. “Black Panther,” part of the Marvel Cinematic Universe, was another favorite, winning the Academy Awards for Best Costume Design and Best Production Design, both marking the first win of an African American in those categories. The film exhibits gorgeous settings, elaborate costumes and intense action scenes while addressing issues surrounding race.

In 2019, plant-based burgers such as the Impossible Burger and the Beyond Meat burger increasingly satisfied people’s appetites. Even a select number of fast-food restaurant chains, including Burger King and Carl’s Jr.,  have embraced this new food trend. Though veggie burgers are decades-old, these burgers are unique due to their meaty flavor despite being completely vegetarian. These meat alternatives not only taste convincing but benefit the environment, as livestock cultivation uses land and water while releasing greenhouse gases, which is an important detail to consider in light of our planet’s current situation.