So many safeties: why seniors should rethink the number of schools they apply to 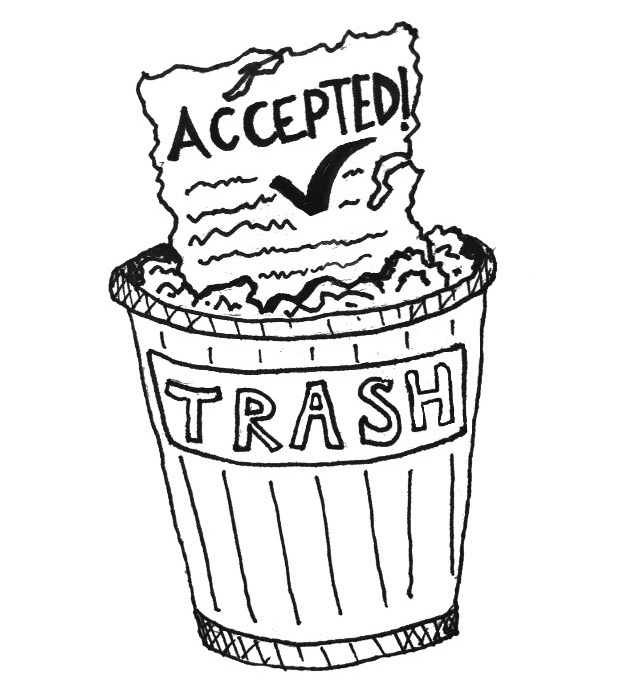 After three tumultuous months of anticipation, the day has finally arrived: college decisions for your top choice school have been released. As you scramble to log into your account on the college’s website, you remind yourself to breathe. You may have received mostly B’s and one or two C’s throughout the past few years, but this school is not nearly as competitive as most. Plus, your SAT score was 50 points higher than that of the average person accepted into this university. You finally gather the courage to click on the button revealing the status of your acceptance. The screen of your computer reads…rejected?

Over the years, many schools that were once easier to get into have become significantly more selective. Part of the increase in college applications is due to students applying to an excessive number of schools, many of which they would not seriously consider going to. This is due to the unpredictably of acceptances at many students’ target schools or reach schools. For most students, they apply to a safety school in order to ensure their acceptance into a college. However, for higher-achieving students, it might be that a greater percentage of schools they apply to are safety schools. Because of this, students with a greater likelihood of acceptances should only apply to schools they would seriously consider to ensure that other students have the opportunity of getting accepted.

This trend of the decreasing acceptance rates is exacerbated by the trend of the increasing numbers of applicants. According to a 2018 report by the National Association for College Admission Counseling (NACAC), the number of students who applied to more than three schools increased from 61 percent in 1995 to 82 percent in 2016. NACAC also found that the percentage of students who enrolled after they were offered admission decreased from 49 percent in 2002 to 33.7 percent in 2017. As fewer students end up attending schools that admit them, it becomes clear that there are too many acceptances for people who do not really want to go to certain colleges.

As the number of college applications continues to rise, selectivity increases because the number of admitted students remains the same. This increases the standards that applicants are required to meet, and students with better qualifications are therefore more likely to be admitted. These students are incentivized to apply to schools they do not necessarily like and consider safeties out of the fear that they will be rejected by their top-choice universities. At Redwood, where many students graduate with over a 4.0 GPA, seniors are perpetuating the issue. With extremely qualified and effective teachers and possible access to standardized testing tutors, they have a considerably greater advantage. Redwood students’ likelihood of getting into most schools compared to other schools’ students is higher, yet Redwood students continue applying to an excessive number of schools.

A self-reported November Bark survey showed that 45 percent of seniors are applying to 11 schools or more, and 44 percent of seniors are applying to more than two schools they consider safeties. However, according to Meghan Farley, director of college counseling at Pingree School in Massachusetts, students should only apply to eight to 10 schools. Students only end up at one school, so their acceptances to schools they don’t go to could have gone to others who wanted to go there.

In order to mitigate the issue of more qualified students not attending and taking up spaces of the applicants with greater interest in the school, colleges have waitlists. However, when many students are applying to more than two safety schools solely to say they got in somewhere instead of being legitimately interested, it is unfair to put a person with worse stats who is on the waitlist under the stress of possibly not getting accepted into that college.

Especially when applying to universities they might be overqualified for, students must be more thoughtful before clicking “submit” because they have the ability to take the acceptance letter of students who want to attend these universities. As regular decision deadlines draw closer, senior students who avoid throwing acceptance letters into the trash will not only help another person get into their top school, but they will also prevent acceptance rates from decreasing in the first place.