Girls’ basketball hopes to bounce back with fresh roster 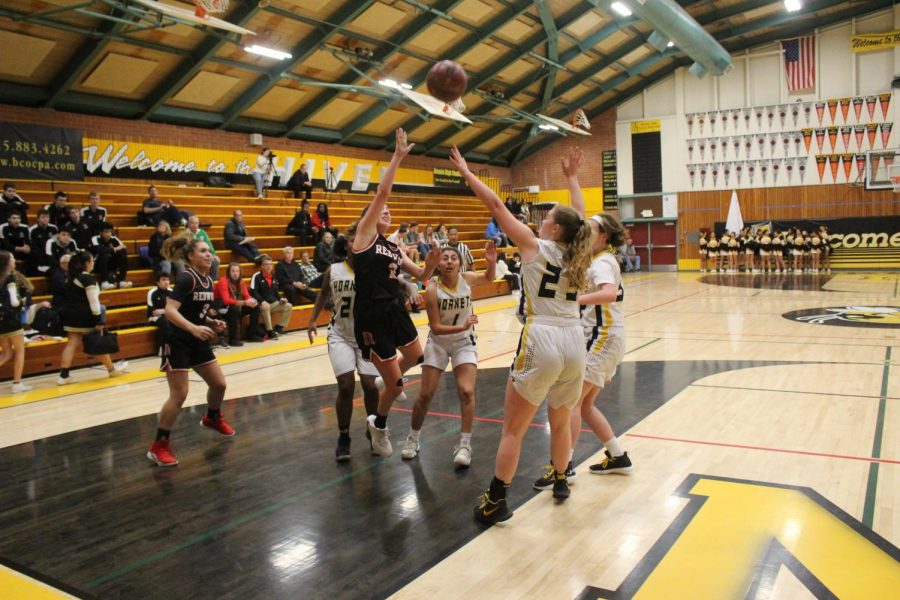 When the final buzzer sounded last year on Feb. 8, it marked a devastating end to the 2018-2019 girls’ varsity basketball team’s season. Although they were the favorites to win the Marin County Athletic League (MCAL) title, boasting a 19-5 record, they lost against Marin Catholic in the MCAL championship. After the season ended, the team lost five seniors out of the 10-player roster, but the new team is hopeful for the upcoming season.

After a week of tryouts in the first week of November, head coach Diane Peterson selected the team’s final roster for this upcoming season. Peterson, coaching in her eleventh year for the girls’ team, picked five new players to step up and be on the team this year.

“It’s a very hard working crew. I know the returners are really hungry, especially after the way last season ended with the tough one-point loss in the championship game…. The new kids on the team have the same energy [as last year],” Peterson said.

Last year, the team’s strategy focused more on scoring and rebounding close to the basket through centers and power forwards, such as MCAL Player of the Year and 2019 graduate Jenny Walker. According to Peterson, this season the team is more guard-heavy, which can help in aspects such as shooting and dribbling, but will make rebounding and blocking more difficult.

“This team is different from last year and we have our own uniqueness, but we will still be a strong team,” Peterson said. “The girls are hungry for every person in our league. [Everyone] is a threat, and we have to come in and focus because really anybody could beat [our team]. It’s just a matter of us being prepared.”

Although the team no longer has Walker, they do have one of the best players in the league: junior guard Kylie Horstmeyer. Horstmeyer is currently averaging 24.5 points per game and 22.5 rebounds per game through the first two regular-season games of the season.

Another area of confidence for the Giants is team chemistry. One new player to the team, sophomore shooting guard Bridgette Ryning, has noticed how quickly the team has bonded.

“Everyone’s already bonding and gelling right off the bat…. We all try to hang out outside of basketball to [improve our] chemistry,” Ryning said.

The sole senior on the team, Chenna Mendieta, is one of the leaders this year. The guard has been on the varsity team since her junior year after transferring from San Rafael High School at the end of sophomore year.

Mendieta believes that an aggressive but focused team mentality is the most important key to success this season, especially with all the new players on the roster.

Mendieta said that the team needs to stay composed and be on the same page to be successful. Mendieta has no doubts about this year’s team as she believes that the team is going to succeed as long as they keep a positive mindset. Even though the roster is mainly composed of guards, one junior, Adelaide Duryee, has played center for the past two years on the varsity team. Duryee, along with Mendieta, wants to help the newcomers improve this season.

One player she can help teach new moves to is sophomore Sadlie Leonard, who is one of the new centers. Duryee plans on using her experience to teach others about how to play the center position.

“I want to be able to help the new five out, be there [to] offer some stability and help them out along the way to help them improve,” Duryee said.

Duryee believes that discipline on the defensive end is one of the most important aspects that the team has to improve on.

“We’re definitely a very handsy team with fouling…. I think we need to work on our defense and not fouling because once we do that, we can shut out a lot of teams,” Duryee said.

Duryee is ready for the upcoming season and believes that the team has the potential to go far, but she also understands that dedication and hard work are the keys to success.

The Giants have their eyes set on the Tamalpais Hawks in their upcoming home game on Dec. 20.