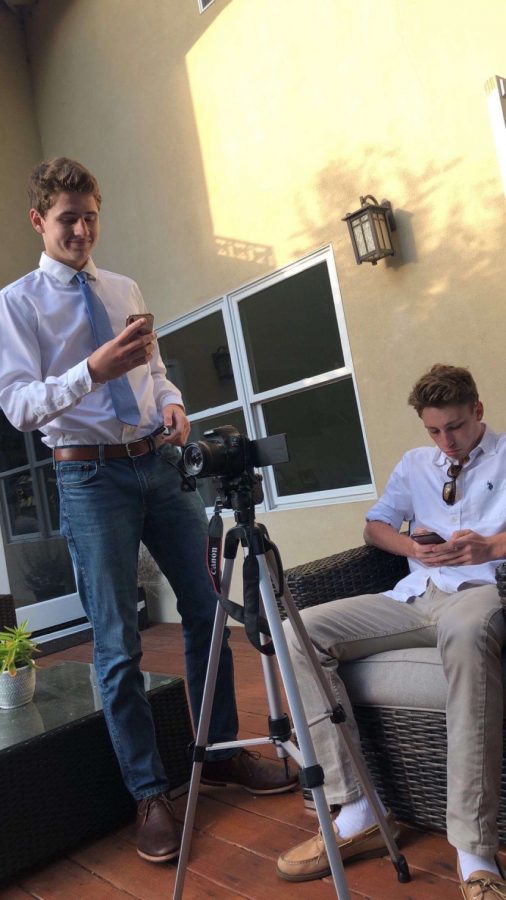 Creating a new video, Matt Shippey and Callaway Allen look over their scripts.

“Inspiring, motivating, providing.” These are words that the NBA GURU team lives by. Back in July of 2018, three basketball lovers, senior Matt Shippey and former Redwood students Zach Agenbroad and Evan Solter, came together in hopes of creating a platform to discuss, debate and inform other basketball fans about the National Basketball Association (NBA). In the past year, the founders have recruited more members to the team, a few of which include senior Callaway Allen (Analyst and Head of Sponsorships), senior David Carruthers (Analyst and Head of Social Media) and former Redwood student Max Gilberg (Editor-in-Chief).

Along with their academic and social lives, the boys make an extreme effort to post videos on their YouTube channel. Their videos are all about the NBA, posting content such as score updates and polls about game predictions.

“We want to inspire other kids to succeed in their sports. We comment on a lot of our fan’s posts and some even make videos with us. We don’t want to just be a sports fan page that aims for likes and money. We want to motivate people,” Shippey said.

To further expand their online presence, NBA GURU has created their own website where fans can seek more inside information about the group in addition to their Facebook, Twitter and Snapchat accounts. As young adults, the NBA GURUs know their audience, which has helped them engage an increasingly large fan base consisting of primarily young adults. Their Instagram account, where it all began, currently has over 42,000 followers. Most of these people are actively commenting and liking posts, as well as participating in daily polls.

“It feels really good to know that people support what we are doing and that we are having a positive impact on the community. It feels great to be able to entertain and inspire so many people,” Shippey said.

In addition to providing NBA updates, the website also promotes products. Currently, they are advertising for Powerhandz, affordable athletic gloves, and GURU Light Organic Energy Drink, a vegan low-sugar energy drink. According to their website, they are planning to release NBA GURU merchandise, which will be for sale online.

In October, NBA GURU held a costume competition where the group encouraged fans to send in pictures of their Halloween costumes. The team picked three winners who won a signed NBA GURU ball and NBA GURU wristbands.

“Having a very active fan base means a lot to me. I run into kids all the time and they ask me if I’m the guy from NBA GURU and if they can have my autograph. It’s cool to be recognized in my community,” Allen said.

Senior Graham Tewksbury is an ardent fan of NBA GURU, following them on Instagram and putting time aside to watch their frequent videos.

“Being a senior and a varsity soccer player, I don’t have the time I used to have to watch basketball even though it is one of my favorite sports. It is a really convenient site for people who are extremely busy and may not have the time to watch daily games. Plus, you can tell the GURUs have a passion for the sport,” Tewksbury said.

Allen is not only an avid basketball fan, but he is also a four-year member of the Redwood boys’ basketball program. On top of the full-time job of managing NBA GURU and playing basketball seven days a week, his love for the sport has driven him to coach young aspiring basketball players. During the summer he is a camp counselor, encouraging his campers to follow and keep up with NBA GURU in order to remain up-to-date and engaged in the sport.

Shippey and Agenbroad plan to continue the NBA GURU legacy by expanding it in college and making it become a mainstream sports news outlet by June 2020. They intend on covering all sports and changing their name from NBA GURU to something more appropriate. For more information visit nbaguruofffical.com.