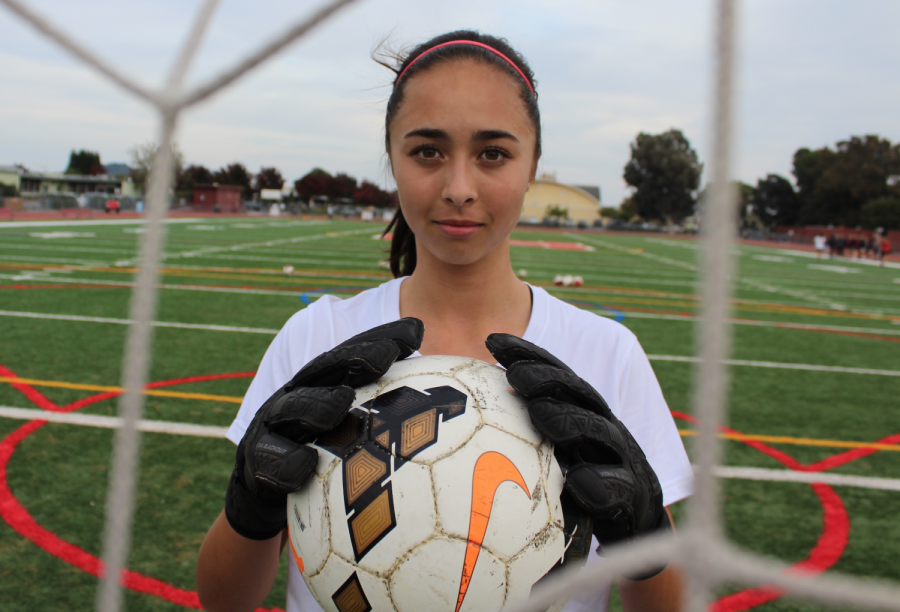 Playing sports of all kinds at the park since age five, sophomore Mia Hamant has always displayed natural athleticism. Mia’s dad, Kevin Hamant, signed her up for all different sports at a young age in order to familiarize Mia with them. By Mia’s freshman year, she made the varsity soccer and softball teams, along with the Olympic Development Program (ODP) Norcal regional soccer team.

Forced to make a tough decision between playing soccer or basketball in high school, Mia committed to soccer because of how much she loves being a goalkeeper.  As of now, her focus is on playing at the Division I level in college.

“I like the feeling as a goalkeeper. Pretty much the whole game rides on you. If you make one mistake, you’re done. I really like that feeling for some reason. I like how I can control the game and my backline, which is why it’s my favorite sport,” Mia said.

Mia has taken her talents beyond Marin to play for the ODP. She was selected out of the best goalkeepers in Northern California and competed in tournaments in Arizona and Oregon. After playing both with and against the best talents on the West Coast, Mia was later chosen to attend regional camp. At the camp, she was named one of the best players in the North West, prompting her upcoming travels to Florida and Costa Rica for soccer.

According to Mia, Kevin has played a role in her ability to flourish as a player.

“My dad just expects a lot from me, which is really good. He spends a lot of his time helping me, filming my games and going over the film with me. That pushes me and shows he really cares,” Mia said.

Mia was one of three starting freshmen on the varsity girls’ soccer team last season. After a very successful season, was awarded a position on  Marin County Athletic League’s (MCALs) “first team,” which is composed of eleven of the top-ranked players in the MCALs each season. She was surprised because of how rare it is to have a freshman be chosen as the best goalie in the league.

According to Kevin, Mia’s natural athleticism and consistent work ethic have helped her become a successful goalkeeper.

“She constantly does extra workouts outside of practice; in all of her sports, she’s always done that. She’s very dedicated to her craft and has worked constantly on it. She came home from practice and did push-ups and crunches. She’ll even do extra practice with some of her teammates at different times during the week,” Kevin said.

According to Mia’s ODP coach, Tyler Gottschalk, Mia is extremely talented, however, it is her confidence that makes her unique.

“Her range is fantastic, she’s really good with her feet and makes good decisions. For me, the thing that separates her [from other goalkeepers] is the confidence that she exudes in the goal,” Gottschalk said.

According to Mia’s Redwood goalie coach, Will Finnie, her competitive approach to training every single day is something other keepers her age lack.

“She competes with players on our team and with the [other] goalkeeper. She always wants to be not only the best goalkeeper on the team but also wants to be the best on the field. Not many goalkeepers at her age have those sorts of goals for themselves,” Finnie said.

Although Mia hopes to pursue soccer in college, she also excels in softball, and finds that it balances the time she spends playing soccer.

“Soccer is year-round and I am playing in so many leagues that softball is a nice break from [it]. I learn new things, and it helps my hand-eye coordination,” Mia said.

After college, Mia wants to work in a field that is closely connected with soccer and sports, but for now, she is fully focused on her high school season.

“She has seen players who have played for her same club team, [Marin FC] go to the level that she aspires to. I think she definitely has all the qualities to be a top-level Division I keeper. I hope that’s what she strives for because it’s definitely what she’s capable of,” Finnie said.