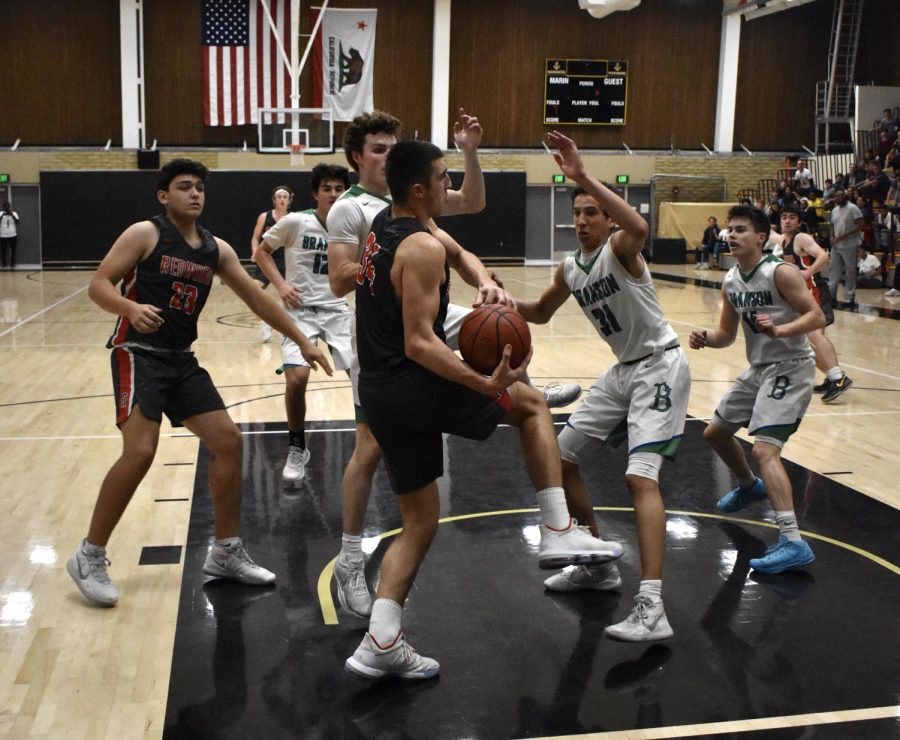 Surrounded by Branson opponents, Pasquale Ancona searches for a teammate to pass to.

Welcoming a new head coach and a fresh roster with a broad range of grade levels, the boys’ varsity basketball team is preparing for their upcoming season both on and off the court. After a devastating one-point loss in the Marin County Athletic League (MCAL) finals last year to Branson, the team is training with Redwood’s strength and conditioning coach, Danielle Sartori, in addition to daily practices.

This year’s team has five seniors, six juniors, one sophomore and one freshman. Compared to last year’s team, which was solely comprised of upperclassmen, more playing opportunities have been given to younger athletes such as freshman Ains Fish and sophomore Charlie Treene. However, according to head coach Jay DeMaestri, the seniors are fulfilling the leadership roles left vacant by nine graduating seniors last season.

“I think the seniors are going to take a lot of the responsibility both on offense and on defense in leading the team,” DeMaestri said. “I look to the seniors to make sure they know everybody’s game, like where they like the ball to help guide them towards obtaining our goals.”

According to senior Pasquale Ancona, a lack of maintained support for each other was a team fault that led to their defeat in the past.

“When adversity hit us in crunch times in the past, we have flaked on each other. What our coaching staff and the returners have been trying to say is that just because you make a mistake in game or in practice, it shouldn’t matter, because once you make that mistake, you have to live with it,” Ancona said. “It really comes down to how you are going to handle it from that time forward.”

During his sophomore and junior years, Ancona accumulated 188 points and 24 assists, making him a valuable asset in his final season. Although this year’s team is dominated by upperclassmen such as Ancona, they are all a tight-knit community. Because of the compatible dynamic, each player counts on one another when they step onto the court.

As a returning varsity player, senior Callaway Allen believes that a win or loss is based on the team’s unity.

“I think that being a selfless team and all working together is really important. It’s a team effort. I think all twelve of us have a role we have to play in order to succeed,” Allen said.

Building off past head coach Steve Compagno’s legacy, DeMaestri is adding his own coaching expertise in order to obtain the pennant. In particular, DeMaestri believes each player should feel comfortable in their position.

“I think my role is just to put the kids in positions that they can be successful in. I know they are hungry, and they want [to win] so I would love to bring [a pennant] to the school,” DeMaestri said. “If they play as one, I think we will be a very, very tough opponent for a lot of teams.”

According to Ancona, if the team carries this persistent attitude throughout each game, the team will have a higher chance of achieving their goals.

“It’s a mindset. I think we have a lot of [strong players] on the team who just want to win. But at the same time it comes back to adversity, like when [things don’t go your way], you have to step up and be collective and make the right plays,” Ancona said. “It’s just competing and knowing that when we do make a mistake, it doesn’t determine the end result. We just have to keep going.”