Girls’ varsity soccer shapes up for the winter season amidst changes 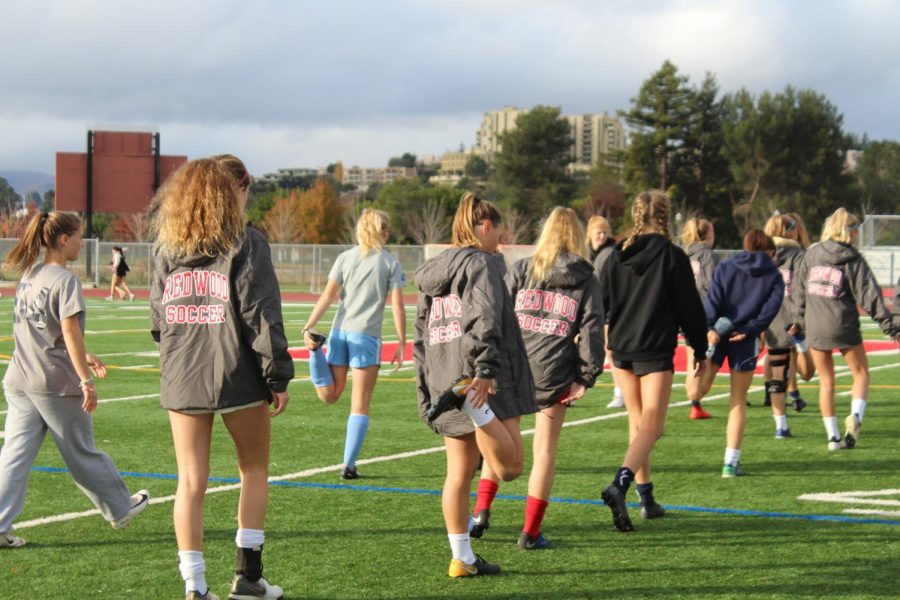 In order to prevent injury, the girls’ varsity soccer team stretches their quads during a dynamic warm up.

The girls’ varsity soccer team is ready to adapt in pursuit of a successful 2019-2020 season. The team is headed into the season following the loss of many talented seniors, their head coach of 10 years and an MCAL title against Branson. This year, the resilient team is armed with 10 new players, two committed senior captains and a coach with a competitive streak.

That coach, Lucas Marroquin, is a newcomer to the program, however he believes he can push the team to win.

“[The previous coach] did a great job. Buying into a new culture can be kind of hard and could be a weakness, but I don’t believe it will be,” Marroquin said.

According to senior captain Sophia Curtaz, Marroquin is placing emphasis on dedication  on the field and shaping the culture more positively.

“It is definitely a more committed environment [this year]. We definitely will be practicing rain or shine,” Curtaz said. “Sometimes it would be raining before big games, and we wouldn’t have practices, and that would really affect the way we played in the games.”

“The drills and all the games are definitely a much higher intensity and more serious than last year. [Marroquin] also adds a lot more fitness that our old coach didn’t incorporate in our trainings,” Rembrandt said.

According to Curtaz, Marroquin places emphasis on the physical aspects of the sport, not just technical skills.

“He wants us to be really fit and strong to outrun opponents and last longer in games,” Curtaz said.

Marroquin has strategically planned this season’s fitness, scheduling specific exercises for when it will be most beneficial to his team.

“I try to do it at the beginning of the [season] so that way when we have a lot of games, we’re not doing a ton of fitness, and we’re not risking injury,” Marroquin said.

Another change the team is facing is an abundance of young players, which could jeopardize the bonds between the team. Eleven of the 25 members of the team are underclassmen, including sophomore starting goalie Mia Hamant who was a pivotal player last season. Many of the other underclassmen are new to varsity, which Rembrandt feels drastically changes the chemistry but is not necessarily detrimental to the team.

“This year a majority of our team is new, so we’re not quite sure if the chemistry is still there or how it will be,” Rembrandt said. “I think a lot of the new team members are good additions to our team, and they will definitely help our team perform better.”

Both new and old players are expected to make large contributions on the field. Curtaz and her co-captain, Grace Bouton, are committed to California State University, Chico State and the University of California, Santa Barbara, respectively. Bouton is ranked 12th in the league for all-time most goals scored. Other key players include Rembrandt, a forward, and sophomore Avery Jones, a midfielder.

While strong individuals are important, Marroquin is eager to see how the team as a whole will develop through the season.

The team’s biggest challengers this year will be Tamalpais and Branson. They were able to defeat Tamalpais on two occasions during league, but failed to prevail during the second round of NCS. In last years’ MCAL finals, the team lost in penalty kicks to Branson, and is looking to redeem themselves against both teams.

Against Tamalpais, Branson and the rest of the teams in their league, Marroquin wants the team to stay positive.

“I think it’s all about having Redwood pride, that’s the biggest thing,” Marroquin said.

The girls won their first game against Marin Academy on Dec. 2, and are looking to defeat Drake High School on Dec. 14.