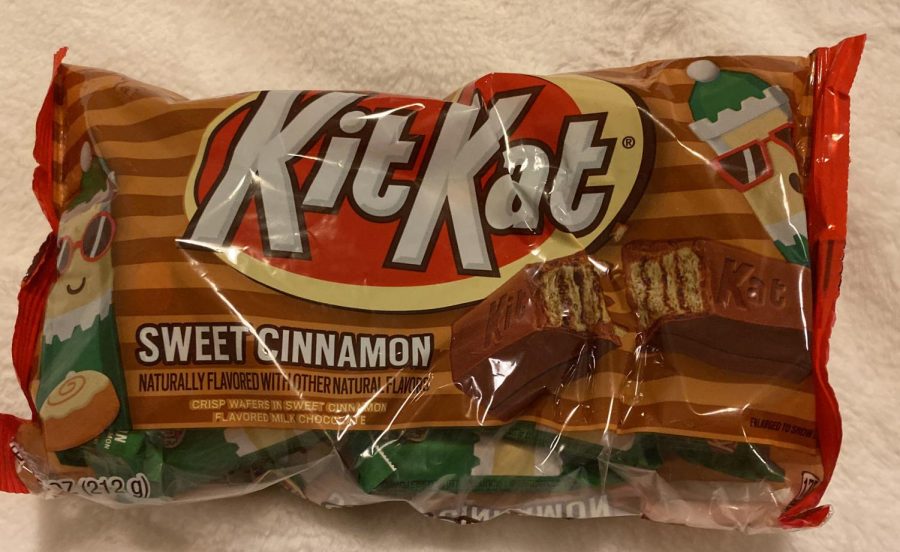 For most, Oct. 31 is the ultimate night for candy. Hyper trick or treaters go door to door, begging for Reese’s, Milky Ways and Snickers. Afterward, kids spend hours sorting their loot into coordinated piles. But thoughts can quickly shift from fun-sized sweets to fragrant Christmas trees, radiant menorahs and skillfully wrapped presents by the next morning. However, holiday candies should not be overlooked. As jumbo bags of Halloween candies are rapidly moved to clearance, display cases begin to crowd with limited edition treats in flavors such as gingerbread, peppermint and hot cocoa. In order to fill the hole left by my disappearing Halloween candy, I decided to try four of these limited-edition winter-themed treats.

As soon as I saw Sweet Cinnamon Kit Kats, I knew I was going to buy them. For the 2019 fall and winter season, Kit Kat released cinnamon as a new flavor, with prices ranging from $2.98 to $3.99. The originality of a cinnamon-inspired candy immediately excited me. When I opened the bag of fun-sized bars, the sweet smell of cinnamon rolls, reminiscent of November mornings, wafted out and heightened my anticipation. Taking my first bite, I was not disappointed. Rich, cinnamon-flavored chocolate incorporates the perfect mix of sugar and spice, while Kit Kat’s signature wafers add a crispy texture to the bar. Though I am not typically a Kit Kat fan, I was a sucker for these and found myself reaching into the bag again and again for more.

A steaming hot chocolate topped with gooey marshmallows, Hershey’s Kisses stored in crinkled silver foil––these are two things that, separately, I enjoy. However, when combined into Hot chocolate Hershey’s Kisses, I am not as pleased. Sold for $3.99, these Kisses consisted of milk chocolate in the traditional Kiss shape stuffed with marshmallow flavored creme, swaddled like a present in a wrapper with brown and white spots. The texture of the creme felt off, not nearly smooth enough and almost crumbly. The powerful, artificial taste left by the “marshmallow” completely overshadowed the chocolate. Next time I am craving hot chocolate, I will definitely be sticking with the good old fashioned drink instead of this candy knockoff.

The packaging of these Lindor Peppermint White Chocolate Truffles reads “The lusciously smooth center starts to melt, and so will you.” While this may not be accurate literally, it captures the feeling of eating one to a T. The irresistibly creamy texture and prominent taste of peppermint combined flawlessly as soon as I bit into the white chocolate shell. I savored each mouthful, letting the strong (yet far from overwhelming) mint reach each of my tastebuds. Similar to peppermint bark, the white chocolate was spotted with small bits of hard peppermint rather than just flavored as such, which contributed both variety and another layer of texture to the overall experience. Though more expensive than other options, the delectable truffles were easily worth the $5.29 I paid for them.

Is bigger always better? In the case of these M&Ms, yes. Slightly larger than typical milk chocolate M&Ms, these feature more chocolate and much more mint. Though the sharp mint overpowered the more subtle chocolate at first, I began to register both flavors as I ate more. The candy shell, decorated in red, white or green, adds a crunch to each bite, as well as inspiring thoughts of Christmas. The bright color theme makes them easy to pour into a bowl for a much cheaper holiday decoration ($3.19 to $4.29) than anything you might find at Cost Plus.