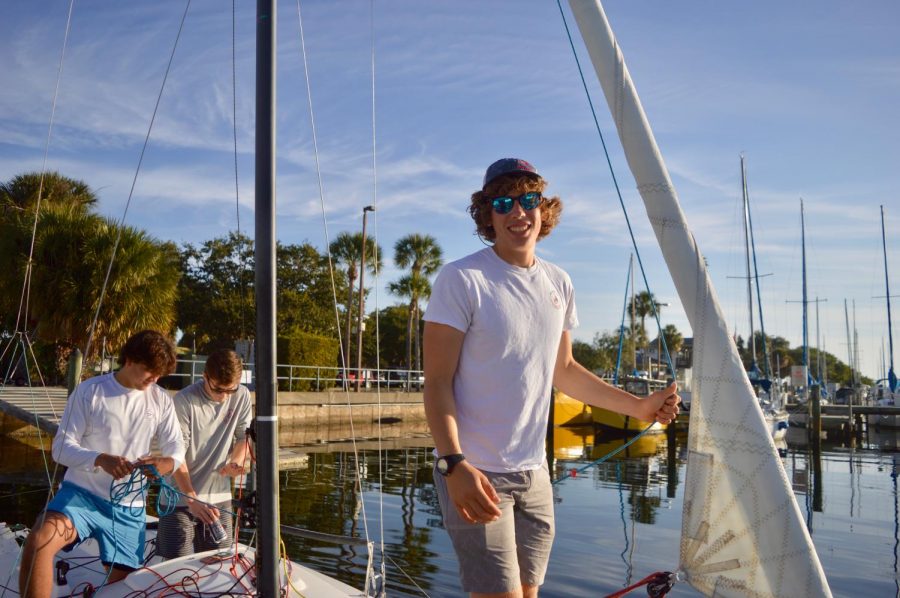 Rigging his boat with his teammates, Yoslov is optimistic about their upcoming day of racing.

Since he could walk, junior Caleb Yoslov has been committed to a lifestyle that revolves almost entirely around sailing. After winning his second national title at the J70 Youth

Growing up on the San Francisco Bay, Yoslov joined the Optimist (Optis) Green Fleet team through the San Francisco Yacht Club at only seven years old and quickly developed into an adept sailor. After sailing his first international regatta for

the United States of America (USA) Team in the Netherlands in 2013, Yoslov continued to seek out opportunities to progress in the sport. However, Optis favors small, lightweight competitors; therefore, Yoslov’s tall and large-built stature caused him to grow out of the boat quickly.

He transitioned to sailing Lasers, a one-design, single-handed Olympic class boat that was more adequate for his size. Yoslov excelled in Lasers, leading him to win a national title in the Pacific Coast Championships in 2017 and attend the Laser Youth World Championships the same year. Yoslov’s coach, Parker Shinn, a national champion himself, attributes Yoslov’s success to his proactive work ethic and dedication to the sport.

“[Sailing] is a very multifaceted sport that requires more than athleticism,” Shinn said. “To succeed in sailing, you have to be able to excel in all areas, and not everyone has that ability. From early on, it was clear that Caleb has a natural aptitude for sailing based on how quickly he learned.”

Shinn argued that Yoslov growing out of Optis at a young age set him back in his development, but his commitment and eagerness to improve has compensated for any lost training.

“I think when he started sailing the Laser, he thought, ‘Here is an opportunity where I can thrive.’ Now he has become one of the top youth Laser sailors in the country,” Shinn said. “To get from a point where he was behind the curve, to the point where, as a junior, he is one of the to

p in the country, he has had to improve in every area. You cannot get there if you are lacking.”

“The community is great because everyone pushes each other, but at the end of the day, we are all close friends,” Yoslov said. “We are out at events, training together and helping one another improve. We are all working together as an entire nation to get better.”

Sailing at such a high level from a young age has not only given Yoslov many opportunities but also has taught him skills that are uncommon to develop as a teen. For example, he plans his sailing finances at least a year in advance so he can apply for grants and sponsorships.

“[Sailing] has completely changed my life. From traveling at a young age and having to be independent, it taught me a lot of life skills that I probably would not have picked up on otherwise,” Yoslov said.

Fostered by his love for being on the water, Yoslov found a passion for the outdoors, pursuing frequent skiing trips and enrolling in Tamiscal’s Team program.

This fall, Yoslov joined the Redwood sailing team, where unlike his prior experiences, they sail double-handed dinghies called Flying Juniors. Although he found the transition to two-person boats difficult, he is content with his decision to commit himself to the team.

“Before, [the Redwood team] did not seem worth my while, but now, I realize it is a lot less about my individual sailing, and more about the entire team working together,” Yoslov said.

Laser competitor and senior captain of the Redwood team, Nicholas Sessions, has sailed with Yoslov for the past seven years, resulting in mutual respect for one another.

“We are always competitive when we are out on the water. [Caleb] advocates for us to grow as a team and to improve individually. It is a great, competitive environment and it pushes us far,” Sessions said.

“I expect [Caleb] to do an Olympic campaign at some point,” Shinn said. “When you combine a love for the sport and a natural aptitude for it as well as a really strong work ethic, good things are going to happen. I would not be surprised if he is competing at the highest level in the world in the Laser.”