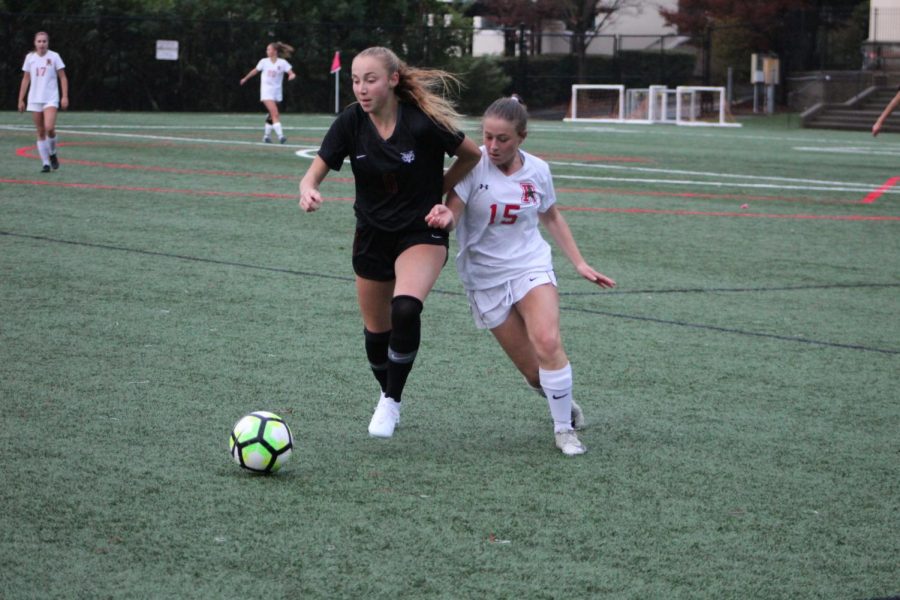 Hana Lefferts sneaks up on an opponent from behind.

While heavy rain beat down on the field on Monday, Dec. 1, the girls’ varsity soccer team was busy defeating Marin Academy in their first game of the season. Although the game will have no effect on Marin County Athletic League (MCAL), it determined the team’s seeding in the North Coast Section (NCS).

In her varsity debut, sophomore Briana Salvettis scored the two Redwood goals of the game. With 20 minutes left, Marin Academy double-teamed goalie Mia Hammett, ending Redwood’s 2-0 lead. Shortly after, Redwood regained their lead and protected the score of 2-1 for the remainder of the game.

According to senior midfielder Hana Lefferts, Marin Academy is known to be a big competitor of Redwood, so the team focused on not getting in their heads. After having lost seven important senior players, the team dynamic shifted, making for an unpredictable first match.

“As the score showed, we played phenomenally for our first game. It’s just awesome to see that we have chemistry still and the new players are making a really big impact like Briana,” Lefferts said.

After her outstanding performance, Salvettis expressed feeling satisfied with her relationship with her new team.

“[Getting moved up] was little bit intimidating, but I knew some people, so that was comforting,” Salvettis said. “I feel like we’re getting along very well. We want to do a bunch of team bonding and I feel like that will pay off for the team.”

According to coach Lucas Marroquin, the team’s performance has a lot to do with their social dynamic.

“I think we played really well. I think our chemistry really showed just how close this group is. It got us a really good result at the end,” Marroquin said.

The first official game of the season is Wednesday, Dec. 3 against Branson, another top competitor after Redwood lost in the MCAL championship to them last season. To prepare, the team has a few strategies ready to utilize.

“We will do a film session if we have film from the previous years. Since we do play club with a lot of these girls, we know how some of them play. We talk about what’s most important and how to shut the players down that are most dangerous,” Lefferts said.

According to Lefferts, Redwood might not be as strong this year after having lost so many of their skilled players. However, this scrimmage has helped rejuvenate her hopes for the season.

“I think that this year is going to be harder to follow [than] last year, but we’re starting off really strong, and it’s really awesome to see the new players being integrated,” Lefferts said.