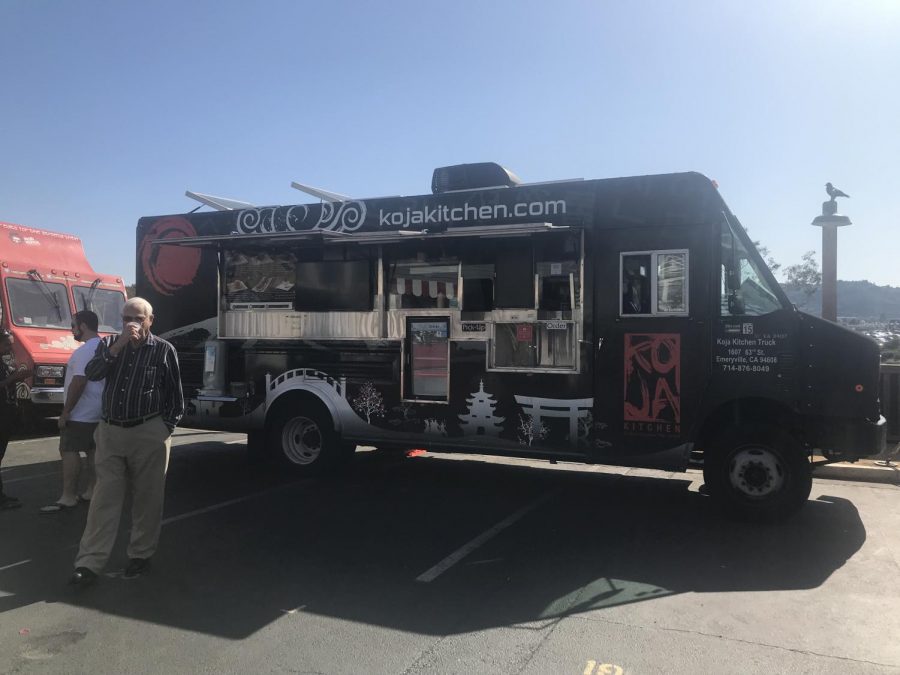 With its selection of food trucks to suit even the pickiest of eaters, the Marin Country Mart is the ideal place to spend a Sunday afternoon. When standing outside in the sunshine, smelling the intermingling aromas of different exotic foods, hearing the faint notes of music played live, customers of the Marin Country Mart’s food trucks are offered the perfect escape from the humdrum of day-to-day life. Here are some of the best and worst trucks to visit, rated on a five-star scale.

With their assortment of sauces ranging from hot to mouth-melting and chicken wings battered and fried to perfection, Wing Man establishes itself as a genuine BBQ truck in the heart of health-conscious Marin. Warning: this food truck is not for the faint of heart, nor anyone wearing white. I got an order of crispy chicken wings paired with the Crazy Uncle Kim and Light Me Up sauces and a side of cheesy garlic fries. The wings were delicious, with tender meat that gracefully fell off the bone and sauces that delightfully contrasted with the saltiness of the chicken. Although the Light Me Up, a medium-hot buffalo sauce, was disappointingly all bite and no flavor, the Crazy Uncle Kim offered the perfect combination of Korean BBQ undertones and spice on the surface. The only downside was that the sauce containers had small openings, making it a messy process to dip the wings.

Pro tip: Order a side of the cheesy garlic fries to dip in leftover sauce.

In comparison to greasy and fried foods commonly sold at food trucks, Banh Mi Zon’s generous use of vegetables was a welcome change. One walks away from the truck feeling satisfied but not overstuffed from their Banh Mis, traditional Vietnamese sandwiches served on baguettes. The combination of the baguette and fresh vegetables made for a satisfying crunch with every bite, and the faint taste of ginger remained pleasantly in the background throughout. However, I would have appreciated a spicier option because, although the contrasting textures in this sandwich were delightful, the flavors felt subdued.

Pro tip: Spice lovers should bring their own Sriracha sauce to kick this sandwich up a notch.

I was excited to try this truck because they provided a bottle of Sriracha to customers, the telltale sign of any good eatery. But I was misled. In hindsight, I should have known better than to order a pork dish at a sushi truck. What was supposed to be a pork rice bowl more resembled a kitchen catastrophe and tasted as exciting as untoasted Wonder Bread. The bottom was composed of soggy clumps of rice drowning in teriyaki sauce, while the meat and lettuce on top were disappointingly dry and flavorless. Chunks of pork too big to eat without cutting and giant shreds of lettuce garnished this monstrosity. It appeared as though this truck attempted to put a random salad over rice and pork and pass it off as a meal, but they failed miserably.

Koja Kitchen’s ingenious use of the rice bun takes this Japanese-Korean fusion sandwich from another typical Bay Area dish to a creative culinary masterpiece. I got the Chicken Koja: Korean-style chicken, vegetables and pineapple sandwiched between their specialty rice bun. The sweet pineapple nicely offset the spiciness of the chicken and their gochujang sauce added a nice element of heat. The texture of the chicken, the bun and the pineapple mixed splendidly, making for a deeply enjoyable meal.