California sets example for the nation with abortion bill 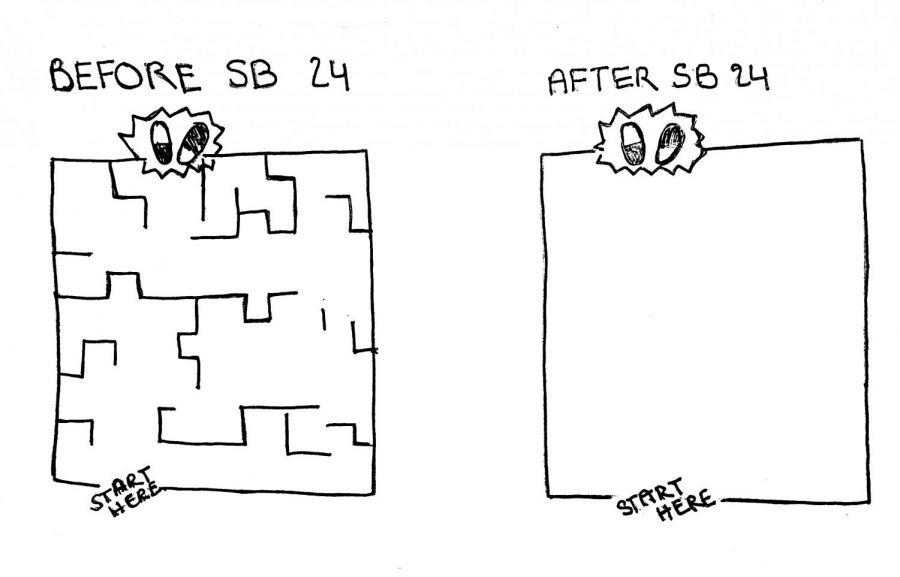 My body belongs to me. When states like Alabama and Mississippi severely restrict abortion, the notion that I have a right to my own body starts to become wishful thinking. Amidst this anti-abortion wave, California reaffirmed its pro-choice stance. On Oct. 11, Gavin Newsom signed into law Senate Bill 24 (SB 24) requiring public universities in California to provide abortion pills starting in 2023. The passing of this bill was supported by Redwood students. According to a self-reported Bark survey, 63 percent of the student body agrees with Newsom’s decision. I’m grateful that I live in a state where my choices are upheld, something every woman deserves. SB 24 should not just be restricted to California; it needs to become federal law.

Following the bill’s implementation, Newsom received backlash from pro-life organizations such as Students for Life of America (SLA). SLA’s president, Kristan Hawkins, tweeted, “California just ensured women will die in their dormitory bathrooms, bleeding out alone from the abortion pill.” Although one must respect pro-life perspectives, it’s not dangerous to take the pills. According to Plan C, the abortion pill is 95 to 98 percent effective in the first trimester, making it the most efficient method of medicated abortion. The abortion pill actually consists of two pills. The first one is Mifepristone, which blocks a hormone necessary for the growth of pregnancy. The second one, Misoprostol, is taken up to 72 hours after mifepristone. It evacuates the fetus from the uterus, according to Carafem, a nonprofit that provides women’s reproductive health services.

I’ll be a junior in college by the time this law takes effect. If I were in a situation where I needed to get an abortion, I wouldn’t want to travel extensive distances to the nearest abortion clinic. Providers typically recommend two visits to a clinic for someone seeking an abortion, which can be problematic. In California, the average driving distance to the nearest abortion clinic from a public university is 20 miles for two visits, according to the Journal of Adolescent Health. For low-income students at public universities, this may not be a feasible option. If they can’t afford a car or the abortion itself, which ranges from $350-$950 depending on the clinic, their right to choose is severely hindered. If the government were to require public universities across the nation to supply abortion pills on campus, financial struggles would no longer be an issue. Abortion is a constitutional right and should be accessible for every woman, no matter her socioeconomic background.

Although providing the pill on campus saves money for students, it’s still expensive for states to supply public universities with it. In California, $10,290,000 in private funds are needed to kickstart the plan. For the entire country to obtain enough money to nationalize the plan, the government should advertise to get people to donate. They should also divert some of the funds they allocate to Planned Parenthood to the abortion pill iniative.

The funding can also help reduce the risk of self-performed abortions. When women take the abortion pill at home by themselves, there are often no instructions on how to use it correctly. In areas of the United States where abortion is restricted, women rely on untrustworthy providers, an unhealthy situation to be in as a college student. By requiring public universities to supply pills on campus, students will be able to safely get a medicated abortion with the help of trained professionals. Anti-abortion policy may seem morally correct to some, but when a woman’s wellbeing is at stake, it’s important to consider the outcomes of these restrictive laws.

Nationalizing SB 24 would resolve issues pertaining to financial struggles and the reproductive health of college women. A number of Redwood students go to college out of state, and if they ever need to get an abortion, they deserve the same treatment as those who stay in state. In a time where anti-abortion laws are sweeping the United States, California sets a precedent for the rest of the nation. It’s time for our federal government to follow suit.