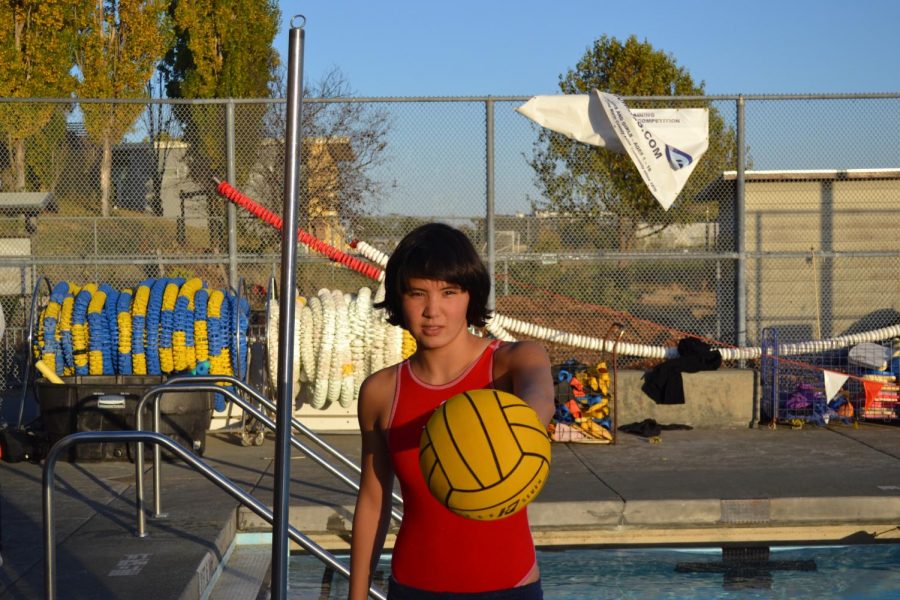 Fastening her head piece and jumping into the pool, senior Caitlin Kawamura readies herself for the sprint. The horn blows and she takes off, eyes fixated on the ball as it splashes into neutral territory. Kawamura’s teammates are quick to follow their humble leader, just as they have been doing since her sophomore year on the varsity water polo team.

Kawamura started swimming competitively at seven years old, but didn’t begin her water polo career until eighth grade when she earned a spot on the Southern Marin Aquatics (SOMA) club water polo team. Towards the end of her first season, Kawamura realized that she not only had a special talent, but a secret weapon.

“Being left handed, there aren’t a lot of players like that. It gave me a little bit of an advantage. Also doing swim team since I was seven helped because a lot of the kids I was playing with couldn’t swim very well,” Kawamura said.

Her freshman year, Kawamura made the junior varsity squad and was elected as team captain by the coaching staff. She continued to prove her worth being one of only four sophomores recruited to varsity during her second year in the program. Having to take a back seat because of star Caitlin Donnelly, a senior at the time, Kawamura put up solid numbers with 11 goals and one assist. However, with seniors graduated and positions to fill, Kawamura became a focal player in the pool her junior year, leading the team by scoring 40 goals in 26 games.

Due to her breakout junior season and past experience in leadership roles, Kawamura was named one of the three captains of the varsity water polo team this year. Head coach Kristen Frazer says the position was well deserved.

“Her work ethic and her commitment makes the whole team better. I never see her not putting in 100 percent,” Frazer said. “She models what she expects from her teammates and then helps encourage them to get there.”

Kawamura is commonly known for her reserved and humble nature amongst teammates, but Frazer believes her role as a captain has compelled Kawamura to facilitate communication with her teammates and helped her build confidence. Senior teammate Cassidy Fragakis believes that Kawamura has been a great leader thus far.

“Everyone on the team has a great deal of respect for her because she never talks negatively about her teammates and is always working her hardest,” Fragakis said.

On top of the respect that Kawamura’s teammates hold for her, Fragakis says that she brings the best out of all of the other girls.

“I know whenever I pass with her, I’m always on my A-game,” Fragakis said. “I never get distracted. We are always working super hard and that’s why I like practicing with her. She always takes everyone up a level.”

Outside of her work ethic and leadership qualities, Kawamura is a crucial part of the team’s success in the pool. On defense, Kawamura is an extremely reliable asset being third on the team in steals with 17 through 20 games. Offensively, however, is where she is the most effective. Being the only left-handed player on the team, Kawamura is able to shoot and score from places that most right handers cannot. This natural advantage complicates defensive strategy for competitors, giving the Giants an edge in six on five situations where a member of the opposing team gets ejected for 20 seconds. The team has taken full advantage of this luxury as Kawamura has netted 27 goals thus far and assisted on an additional 13, leading the team in goals while being second in assists.

Kawamura’s main goal this season is to beat Donnelly’s record of 48 goals from two seasons ago, but admits that she is behind pace at the moment. Beyond high school, Kawamura is focusing on going to college for academics, but plans to try out for the club water polo team wherever she ends up to continue utilizing her secret weapon.