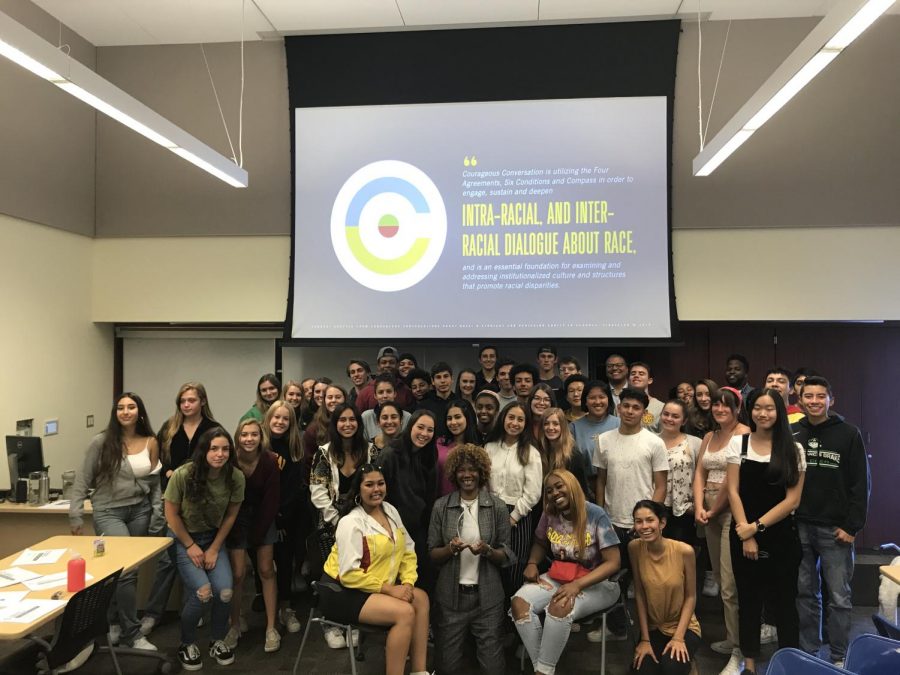 “When the topic of race comes up, people race to racism.”

These words were employed by Dr. Lori Watson, the leader of Courageous Conversation: Beyond Diversity, student workshop. Members of Students Organized for Anti-Racism (SOAR) took part in a convention on Oct. 21 discussing the ins and outs of race and the effect it has on students’ individual lives. SOAR exists in some form at Drake, Redwood, Tamalpais (Tam) and San Andreas High Schools, and after three years of hard work from students at all four schools, SOAR was awarded The Ruby Bridges Student Leadership Award, which recognizes students who demonstrate courage in leadership.

The convention, led by Dr. Watson, is held bi-yearly. Watson has been leading these conventions for three years in the Tamalpais Union High School District (TUHSD) and tries to approach the conversations she has with people about race with a balanced perspective, allowing participants to talk openly.

“I provide people with tools to be able to engage in conversations about race. I believe if we start to talk to each other and not stay racially isolated…then we could start to see some changes in our society, and that’s what I want to do,” Dr. Watson said.

Dr. Watson first started her career working with adults but has recently shifted her attention toward guiding students through difficult conversations regarding race. Currently, she is finding a way to encourage conversations among middle and elementary school-aged students.

“Maybe four years ago, I started doing work with students because I believe that the sooner we provide these skills and tools to people, the better we’ll be in the long run,” Dr. Watson said.

Dr. Watson works across the nation with high school students but was most impressed by the dedication and commitment to creating change that she saw within the members of the TUHSD district. According to Dr. Watson, addressing the work that these students are doing is not easy, though it is increasingly necessary.

“Race matters. And for a lot of folks, that’s a conversation that they just don’t want to have,” Dr. Watson said.

Jake Cohen, a senior at Tam, attended the Oct. 21 Beyond Diversity event and has been in SOAR for the past three years.

“I do think that the conversation is just a little bit more present [than before]. Whether that’s for better or for worse, I think that the fact that there’s a conversation happening about white supremacy at Tam is always going to be a valuable thing,” Cohen said.

Redwood senior Lena Hicks has been to six SOAR seminars and was one of the original members recruited her sophomore year.

“I think it’s really great to have a community of students who are really passionate about [stopping racism]. Everyone’s here because they want to be and want to do something about it. The seminars have taught me and everyone else so much about [race], and it’s just really great to be able to share that information with the rest of your school,” Hicks said.

One of the largest misconceptions about SOAR is that it is only open for students of color, according to Cohen. However, he has found significant benefits even as a white student in Marin.

“SOAR has taught me some skills that are really imperative for going about the world as a white person,” Cohen said.

He also adds that he would recommend other students who have never experienced being a minority to join the club.

“I think that everyone, especially if you’re going to college soon, should learn [about others’ experiences] because they can be important tools in navigating a world that’s built on white supremacy,” Cohen said.

Hicks encourages interested students to come listen at the SOAR meetings or join the class next year, regardless of their race.

“I think if you’re passionate and you want to focus on equality and making our school better and safer, because there’s just so many students who feel unsafe that people don’t know that they’re feeling that way…then come to our meetings,” Hicks said.