The NCAA is all but a fair playing field 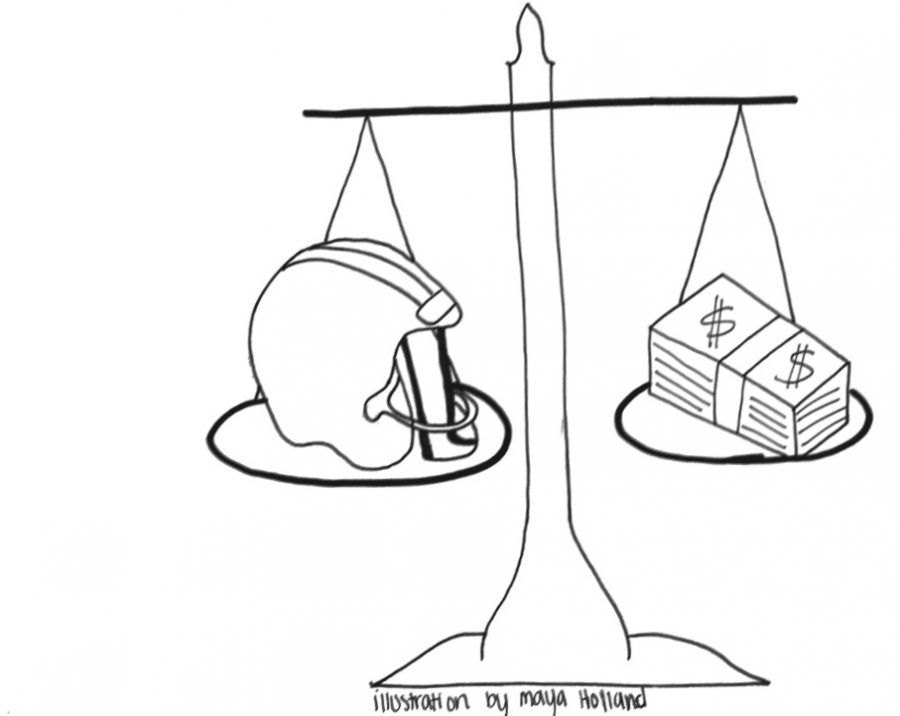 Thousands of cheerful fans shuffle into the stadium, passing their cash to the ticket vendor and eagerly making way to their seats. Plastered with their college’s colors, students’ screams escalate as the football players run into view. As fans cheer from the stands, families and friends from afar gather around the television, snacks in hand and eyes glued to the screen.

While many viewers find immense joy from watching the hard work of athletes pay off, athletic success has gone on for too long without receiving any compensation; it was illegal for collegiate athletes to receive pay or sponsorship agreements of any sort. Now it is illegal for the National Collegiate Athletic Association (NCAA) to punish athletes in California for obtaining those benefits.

On Oct. 1, California Governor Gavin Newsom signed the Fair Pay to Play Act. Going into effect in Jan. 2023, the bill will allow collegiate athletes to benefit from their name and likeness by signing endorsement deals. Due to the fact that collegiate athletes dedicate ample time and effort to their sport, yet receive almost no compensation, it is about time a law like this is put in place; it is extremely beneficial for college athletes.

Colleges and large corporations across the country gain thousands of dollars in profit based on athletes who receive nothing; the financial gap between the coaches and athletes is immense. According to the United States Inquirer, $986 million is spent annually on scholarships to support 45,000 of 64,879 NCAA student-athletes, averaging out to a $22,000 scholarship per student. However, none of this goes directly into their pockets; the money only allows them to pay for the college that benefits from their athletic ability.

On the contrary, approximately $1.2 billion is spent to pay 4,400 college coaches, averaging out to a $273,000 salary per coach. If a college’s budget is a reflection of what colleges value, it is clear that coaches’ labor is more important than their athletes. This is not a fair balance.

Not only are players getting taken advantage of on the financial side, but also in the time they invest compared to coaches. These athletes are working hard both on and off the field and it would be naive to claim that they have adequate time for a job, considering games, practice and media trainings ino athletes’ schedules.

According to the NCAA website, Division One student-athletes spend an average of 40 hours per week on academics and 45 hours per week on training. With athletics and school comprising 85 hours of athletes’ weeks, it is unlikely that they will be able to add work into their schedules, which often prepares them for the future.

Furthermore, the NCAA website reports that 12 percent of student athletes drop out of college before receiving degrees, ultimately inhibiting them from finding careers later on. Considering only two percent of athletes go on to play professionally, according to the NCAA, allowing athletes to seek out endorsements is likely to allow them to become successful even if they do not go professional.

While the NCAA began as an organization focused on education and athletics, the entity is no longer balanced. In fact, the NCAA wants to retain their unjust power by continuing to use athletes’ success to contribute to the billion dollar business. According to NBC news, the NCAA follows most guidelines of a professional organization, however they continually insist that their players are amateurs who should not benefit from their talents. Musicians and artists in college benefit from their successes, so why can’t athletes?

Although the Fair Pay to Play Act is advantageous for the names, images and likeness of athletes, many are worried that it will lead to California universities being pushed out of the NCAA. However if the rest of the country implements this new law, that problem will disappear. In the future, schools located where endorsements are legal may have an unfair advantage when recruiting players. Furthermore, it is possible that paying collegiate athletes would undermine the amateur level of college sports.

While it is possible that the Fair Pay to Play Act will redirect the future of athletics in California colleges, NBC News reported that the NCAA already admitted change needed to occur. The new law is providing athletes with hard-earned benefits they have been unable to seek out for so long.

Even though the NCAA still has resistance about paying its athletes, sports agents already do so, just under the table. According to NBC, former sports agent Josh Luchs admitted to providing money and other benefits such as automobiles, to more than 30 collegiate athletes in the year 2010. The Fair Pay to Play Act is bringing this issue into the light and allowing the athletes to receive compensation in a more transparent way.

While the term “student-athlete” was meant to encompass both the athletic and academic sides of students, the Fair Play to Pay Act is bringing more equality to the relationship that has been skewed towards the athletic side. Allowing collegiate athletes to seek out endorsements would not only benefit players in the present, but set them up for future success. California is willing to spend millions on college athletics, so why shouldn’t the rest of the United States.

According to CNBC, as of Oct. 29, the top governing board of the NCAA voted allow athletes across the country to benefit from their names, images and likeness.