Trick or treat(ed like sexual objects): the real fright of Halloween 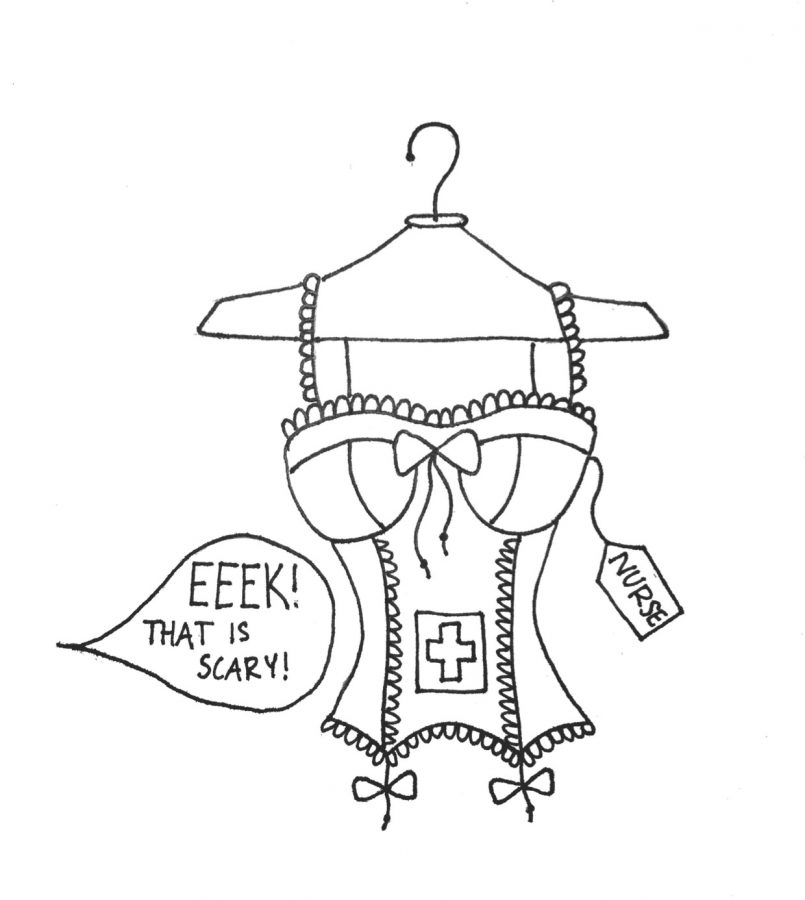 I’m standing in the career aisle of the Spirit Halloween store looking for this year’s getup when it catches my eye. The doctor costume involves the typical scrubs and mask combo, but strangely enough, it does not come in a women’s size.

The girls’ medical field costumes are at the opposite end of the aisle. While both include comically large syringes and the color white, the similarities end there.

A combination of short hemlines and plunging necklines replace practical scrubs, and sensible shoes have been swapped for ridiculous red heels and garters that no self-respecting doctor would be caught dead in. The costume title has been changed from “Adult Lab Coat Doctor Costume” to “Adult Hot Flash Nurse Costume.” To further complicate the issue, there were, unsurprisingly, no male nurse costumes to be found.

Unfortunately, this is not an isolated incident. Searching up “police officer costume” on Amazon brings up six (accurately depicted) boy’s policeman costumes, some suggested searches and then a picture of a young girl in a blue mini skirt and knee-high booties. Further scrolling reveals photographs of models resembling dominatrixes more than crimefighters. Out of the 46 costumes on the first page, only 15 of them were for girls and 11 could be considered sexual.

There is, however, a plethora of alluring alternatives for females, including a cowgirl that appears to ride more than just horses, a Girl Scout who looks like she sells something other than Thin Mints and a very loose interpretation of a referee complete with black-and-white-striped lingerie.

This hypersexualization of girls’ Halloween costumes cultivates an environment that pressures women to comply with stereotypical visions of beauty and femininity in order to be perceived as attractive.

Real doctors, policemen and firefighters all wear the same clothes, regardless of their gender. When boys are able to dress up in the real uniform while girls are pressured to wear sexy spoof outfits, it makes girls look less professional, conveying the message that females are less capable of doing certain jobs than a male would be. This can be especially insulting when the costumes in question are for male-dominated careers, which are already challenging for women to move up in. How can we expect to raise strong young women when the only Halloween costumes on the market teach them that their value stems solely from how much skin they are showing?

A University of Waterloo study conducted in 2000 by Associate Professor Adie Nelson analyzed 469 female, male and gender-neutral Halloween costumes. Not only did the costumes for boys have a greater variation than costumes for girls, but the titles for girls’ costumes included gender-oriented adjectives like “pretty,” “cute” or “beautiful.” Conversely, costume names for boys were simply the job title. This stark difference places an emphasis on the physical attributes of girls’ costumes while further sexually objectifying young women.

It can be argued that the industry is only making what sells. This is true. But the reason these types of costumes sell is because of a common misconception in our society that women need to show skin and look a certain way in order to be accepted. A University of Michigan article titled “Monkey see, monkey do: Model behavior in early childhood” by Kylie Rymanowicz explains that children learn and mimic their behaviors based on those from the people around them. When little girls see women conforming to these forced standards of beauty by wearing sexually suggestive costumes, they feel the societal pressures as well, creating the idea that dressing provocatively is synonymous with womanhood.

This is not to say that everyone needs to dress conservatively. In 2019, it is unacceptable for us as a society to dictate what others can and cannot wear. Attempting to shame anyone in an article condemning companies for forcing revealing costumes on women would be hypocritical. If someone wants to dress up as a sexy pizza for Halloween, they should be able to do so. But it is important to know that other options are available to those who are not comfortable with showing as much skin.

Clothing is meant to be an expression of individualism, giving the wearer a choice of how they would like to present themselves. Those who want to show skin and those who would prefer not to should both feel like their right to dress freely is not being infringed on by costume companies.

That being said, my search for a Halloween costume should not resemble someone’s deleted browser history, nor the pressured look of a Spirit Halloween’s limited shopping aisle.