The commencement of October can be invariably recognized by a couple of factors: brisk mornings, candy sales and of course, Halloween movies. From this specified section of the film industry came arguably the best holiday-themed movie series of all time—The Addams Family. With such a strong cultural impact, it was only a matter of time before the iconic pseudo-horror film was replicated in a way that reaches a more PG audience. The emergence of such occurred on Friday, Oct. 11 in the cartoon “The Addams Family” (2019). 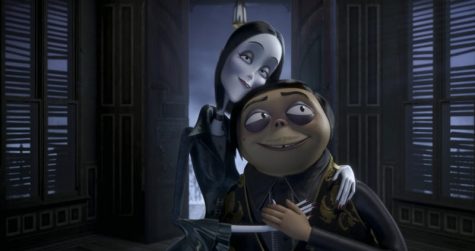 The image of Morticia resembles the live action actress, however Gomez is far from the original.

The opening scene depicted the wedding of Morticia (Charlize Theron) and Gomez Addams (Oscar Isaac), reflecting the themes of love and strong familial ties, which are so prevalent in the original movies. The artistic style is fitting as well—a Tim Burton-esque animation, with a heavy use of dark and neutral colors that match with the strange morbidity of the characters. However, this is where my praise for the rendition ends.

The story follows two main plotlines. One: the preparation of Pugsley (Finn Wolfhard) for his Mazurka, an Addams Family traditional sword dance, performed with the purpose of proving manhood. Two: the family’s attempts to adjust to the new neighborhood, “Assimilation,” which was built directly below the Addams Family house of 13 years. While the Mazurka plotline may have been on par with the original movies in theory, its execution was lazy and underdeveloped. Pugsley’s endeavors in learning were comical, and Gomez’s teaching was passionless. The Assimilation story was incredibly irritating, as it depicted the family as desperate for acceptance from the new neighbors rather than cool and aloof as the Addams’s have always been characterized. It also created conflict between Morticia and Gomez, which persisted subtly throughout nearly the entire movie, whereas originally conflict had a lifespan of about one scene. 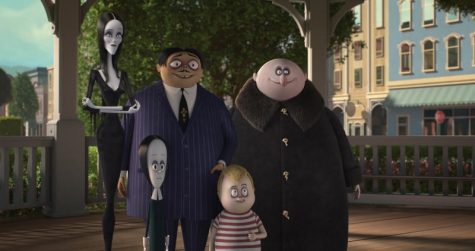 The movie follows a storyline where the Addams’ struggle to be accepted by their neighbors instead of accepting themselves as is, which is a strong ideal in the originals.

Along with a newfound tension, the actual portrayal of the characters was questionable at best. With expectations of the sultry and snarky Addams’s that resided in the originals, viewing the modern rendition of Gomez was painful to say the least. An obviously ugly character with an aptitude for oblivious jokes, this version completely missed the mark on the traits that often made Gomez such a loveable character: wittiness, loyalty and charisma. The same sentiments extend to the fabricated personas of the other family members. Uncle Fester, voiced by Nick Kroll, had no real place in the movie besides for comedic relief, and Wednesday (Chloë Grace Moretz) was a rebel with no apparent regard to worldly problems. Morticia was the closest in mimicking her respective character’s tendency of being a quiet omnipresence throughout the household, yet lacked the iconic Morticia confidence in order to be considered likeable.

Overall, the movie was a flaming disappointment. None of the idiosyncrasies which made the originals so popular were employed in the new version, and even further, the plot was a negligent attempt to sum up the complex characters, rendering it perverse. I would recommend this movie for young children, however it would be a bad influence on their still-growing taste for cinematic appreciation. This failure should act as a reminder of the God-given law: the originals are always better.