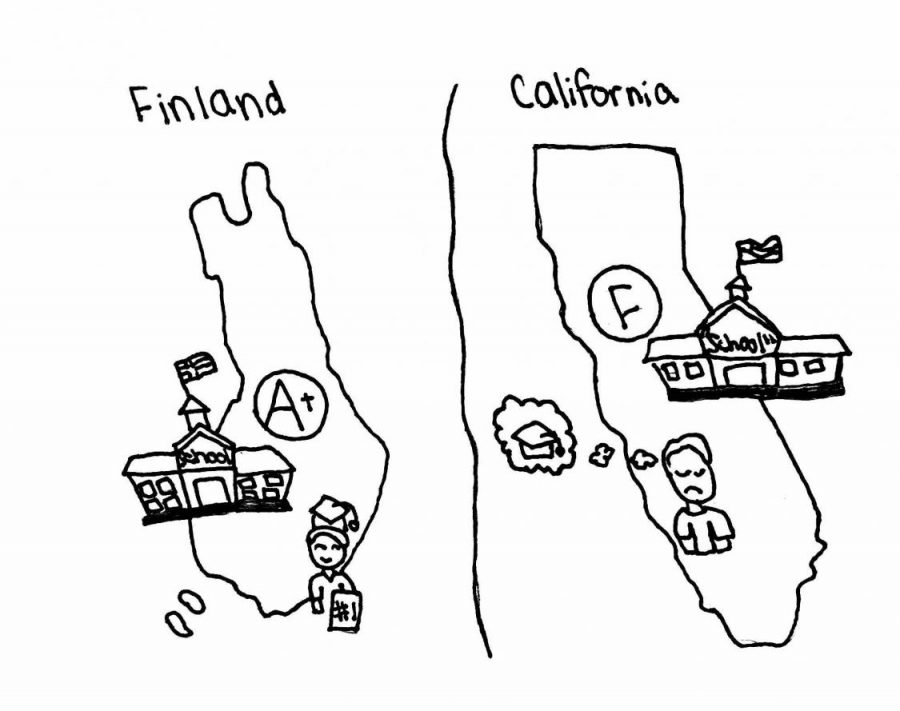 Who wouldn’t want to live in a country where education is free for all citizens and teachers are selected for their excellence as instructors? This country is not the United States, rather, it is Finland. If the United States is a larger and wealthier country, shouldn’t it direct more funding to its education system?

Many argue that educational reform would be challenging for America because of its significantly larger population: 327.2 million compared to Finland’s 5.5 million, making reform difficult because there are more people to control. However, the United States should be able to make changes at the state level, where population numbers are not as daunting.

According to The New York Times, Linda Darling-Hammond, an Education professor at Stanford University, pointed out that the differences between the two countries should not stop California or any state in the U.S. from reforming.

“The fact that we have more ethnicity and economic heterogeneity, and we have this huge problem of poverty, should not mean we don’t want qualified teachers—the strategies become even more important,” Darling-Hammond said. “Thirty years ago, Finland’s education system was a mess. It was quite mediocre, very inequitable. It had a lot of features our system [currently] has: very top-down testing, extensive tracking, highly variable teachers and they managed to reboot the whole system.”

Part of the issue is the way most public schools in California are funded, as it only gives a minimal amount of money from the government to schools. The Local Control Funding Formula (LCFF) provides a base amount of funding according to a district’s average daily attendance (ADA).

One problem with the ADA is explained by Najeeb Khoury, an experienced labor arbitrator in California and head of the Los Angeles Employee Relations Board. In an article by EdSource, Khoury found that school districts with more low-income students have higher absenteeism rates, therefore they receive less money than schools in wealthier districts. This results in less access to important resources such as guidance counselors and tutors, despite the fact that they generally have larger class sizes because they live in a more affordable but high poverty district.

One alternative to using ADA in California is basic aid, which is used primarily by schools in affluent communities like Redwood’s, to fund schools through local property taxes. However, this is biased towards schools in wealthier communities which, in turn, receive more funds. In contrast, Finland’s school funding is solely determined based on the number of students enrolled, a more equitable arrangement.

In an interview with EdSource, Troy Flint, a spokesman for the California School Boards Association, stresses the correlation between the lack of funding for public schools with the high dropout rate and the lack of academic success.

“Our districts, by and large, do not have the resources that we need to serve all of our students well and provide them with an education that prepares them for college, careers and civic life,” Flint said. “This problem persists, and it’s perhaps the greatest challenge to the future of California.”

While insufficient funding is one reason the education system in California is suffering, poorly trained and unenthusiastic teachers is another. In Finland teachers are highly respected, holding a status similar to lawyers and doctors in America. They are selected from prestigious universities where they go through rigorous training to become a teacher. For example, at the University of Helsinki in 2012, there were 2,300 applicants for only 120 spots. Once there, aspiring teachers are taught to design their own curriculum and improve their own teaching. If the U.S. created a system similar to Finland’s in selecting their teachers with more prestige, then there might be more academic success, just as there has been in Finland.

On the other hand, California has increased state funding by 80 percent over the last seven years, which is about as much as it can do. In May of this year, Governor Gavin Newsom imposed a new budget which allocates $103.4 billion for education; a $35 billion increase from what lawmakers approved in 2014. Sadly, all of these reforms may be too little and too late: California is ranked 41st out of the 50 states in ADA funding, proving that despite these reforms, California will likely remain behind the rest of the country and the world in funding.

Ultimately, the California public school system must be changed dramatically. The ADA system is failing its students, and America’s “no child left behind” policy is quite literally leaving children behind. In order to change, California should consider implementing some of the systems that have been successful in Finland. We must dedicate more money to lower-income districts and improve consistency in teacher training. Otherwise, the quality of education will continue to be inconsistent and inequitable, further raising the question: why isn’t public school education in California a higher priority?