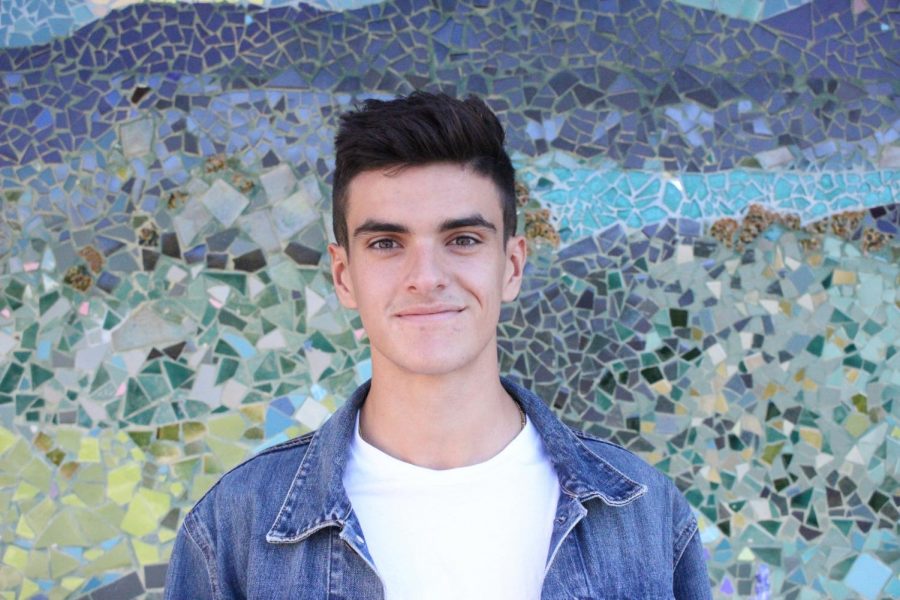 Buildings are everywhere; from simple wooden homes to lavish skyscrapers and ornate mansions. Behind these dwellings are the people that bring them to life: the architects who spend months or years planning and outlining each unique structure. Senior Gabriel Troisi is well on his way to become a member of this design community and has created models ranging from glass houses to colorful murals, setting himself apart from the rest of the crowd as a young artist.

Troisi’s interest in architecture began in elementary school when he would compete with his mom, Erin Sorensen, in “design challenges” to see who could create the best treehouse. Sparking his aptitude for design, Troisi’s curiosity in the subject peaked in his childhood, according to Sorensen.

“By me giving him the tools [to excel in design competitions] and with him having the natural aptitude for three-dimensionality, it became very apparent in his early learning that he saw three-dimensions and became interested in the subject. When he learned the basics of [architecture], he was able to express himself very early on and even do some scale models just for fun,” Sorensen said.

Born in London and raised by Sorensen, Troisi grew up inspired by both his mom’s creativity and Europe’s historical architecture. Over the past two years, Troisi has traveled to England for an internship at one of the top firms, Adjaye Associates, where he was challenged to layout product designs and compose buildings for top companies such as Swarovski.

“He has done some amazing work, but overall I am amazed by his dedication for sticking with [his passion] and going abroad where he has worked with amazing associates of architecture during his internships,” Sorensen said. “When Gabe designed products for Adjaye Associates, it showed that he could come up with a real, viable design in real time and in the professional world, which was a proud moment for me.”

Entering high school, Troisi had little experience with the precise technology used in architecture, so he relied on the courses at Redwood to progress his skills.

“I came to Redwood having a strong interest in architecture, so I kind of got lucky that they offered a class in it. I started to learn the software and the basics of architecture, like layouts and designs, and it just kind of propelled my interest from there,” Troisi said.

After learning these basics, Troisi applied them to his already substantial foundation of skills and quickly became a natural, according to his teacher, Laurie Friedman. An experienced architect herself, Friedman attended the Massachusetts Institute of Technology and worked in the profession for 30 years. She noticed Troisi’s admirable work ethic and eye for the art behind the buildings he was creating.

“He works very, very hard. He completely understands that the more you put into a task, the better the outcome. He pushes the limits of the building envelope. He sees buildings as sculptures while also fitting in the programmatic requirements,” Friedman said.

In Redwood’s architecture class last year, students participated in a design competition to create a model for the new Larkspur library and community center, which will be placed along Doherty Drive in five or six years. Troisi created a building with intricate slopes and angles, a different and more complex approach than most students took, according to Friedman. This made it even more complicated in their computer-aided design (CAD) software, where they create their 3-D models and floor plans for their buildings.

“Most students were designing rectangular buildings and he was building this very organic piece of architecture that utilized different materials. He challenged his CAD software skills with his design: he had to dissect the building section by section to achieve the different angles and curves that were happening simultaneously. It was quite incredible,” Friedman said.

After completing his design, it was judged by a panel of local architects, who presented him with the Conceptual Design award. Although the process of laying out each project in the CAD software is rewarding, the best part of being an architect is yet to come for Troisi.

“I haven’t really experienced [the most rewarding element of architecture] yet, but I imagine it would be seeing your buildings built. But for me, it is probably just getting recognized, like for my Larkspur Library project. It is so reassuring since I worked on it for so long,” Troisi said.

Due to his success, Troisi is graduating early and plans to attend university in England to pursue his career. With his natural ability and determined mindset, Friedman is certain that he will become an accomplished architect.

“I am confident that he is going to one day be a ‘star-chitect.’ Because he is pushing the limits, both in terms of his design and even the software that we use, he understands that it takes a while to achieve the results that he wants to achieve,” Friedman said. “He couldn’t do what he does and receive so much recognition for his work if he hadn’t nurtured and developed it like he had. I look forward to one day opening up my architectural journals and seeing a building that he has designed.”